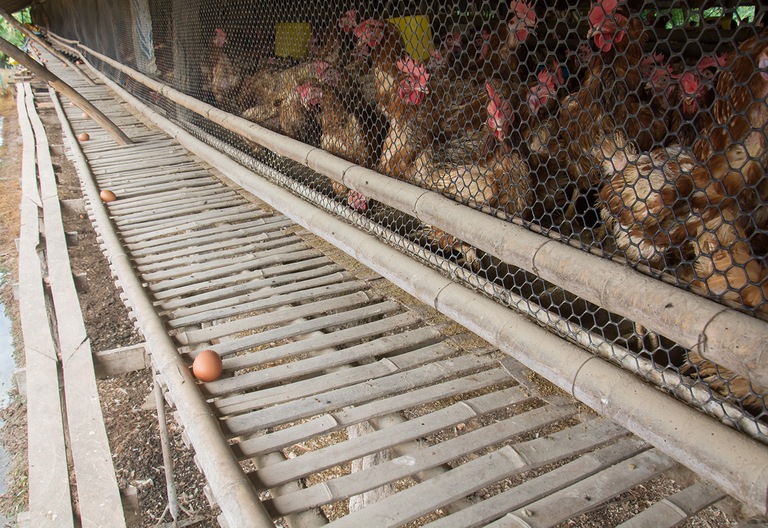 Aroldo Castillo-Serrano made big promises to parents in his Guatemalan community—that a good education and a better way of life awaited their children in the United States. Instead, the minors and adults he lured to Ohio were forced to work on egg farms and live in deplorable conditions.

The Guatemalan parents agreed to pay Castillo-Serrano upwards of $15,000 to take their children to the United States, where they would go to school and have good-paying jobs to help pay back the debt. Since the parents could not afford the fee up front, they gave Castillo-Serrano the deeds to their properties as collateral.

With the help of co-conspirators, Castillo-Serrano smuggled the victims across the border, forced them to live in an isolated trailer park, and used threats of physical harm to compel them to work on the egg farms.

“We think the scheme was going on as early as 2011,” said Special Agent Matthew Komar, an investigator on the case from the FBI’s Cleveland Division. “The youngest trafficking victim we found was 14 years old.”

In late 2014, a tip to a human trafficking hotline made its way to the FBI through the United States Attorney’s Office for the Northern District of Ohio, and an investigation was begun. Surveillance was conducted at the trailer park, and probable cause search warrants were obtained for 16 dwellings.

When the search warrants were executed in December 2014—in conjunction with local authorities and U.S. Immigration and Customs Enforcement-Homeland Security Investigations—nearly 60 people were temporarily removed. “The trailers were in pretty bad condition,” Komar said. “Some had running water, some did not. Some didn’t have heat. Some didn’t have bathrooms. Some had holes in the floors. Dilapidated is a generous term to describe them.”

When they were smuggled across the border, Komar said, “some of the young victims were promised they would be going to school—that never happened. They were put to work right away.”

The victims were picked up by a crew chief in the morning and taken to the farms to work physically demanding 12-hour shifts that included cleaning chicken coops, loading and unloading crates of chickens, and removing the beaks from chickens.

“When they were paid,” Komar said, “victims gave their checks to Castillo-Serrano or his associates, and they got back approximately $50. When some of the juveniles complained, they were threatened physically, and their families in Guatemala were threatened if they didn’t work.”

Eventually, investigators identified 10 victims—eight minors and two adults—whose statements would make the case against Castillo-Serrano. A co-conspirator in the scheme, Ana Angelica Pedro-Juan, falsely represented herself to government officials as a family friend of the minor victims so they would be released to her if the juveniles were caught at the border. She also oversaw the trailers where the victims were housed.

In 2015, Castillo-Serrano pleaded guilty to charges of forced labor and alien harboring. Pedro-Juan pleaded guilty to conspiracy to commit forced labor. In June, Castillo-Serrano, 33, was sentenced to more than 15 years in prison, and Pedro-Juan, 22, received a 10-year term. They were also ordered to pay more than $67,000 in restitution to the victims. Most of the property deeds have been returned to the families of the victims, and four other co-defendants have also received jail terms.

“This case is ongoing,” Komar said. “We believe there are still people who were complicit in the scheme. He added, “When people think of human trafficking, they usually think of sex trafficking. But forced labor is real, and it is eye opening when you see the damage it can do.”

The sentencing of a Houston man for videos of brutality against small animals brings to a close the first successful prosecutions under a little-known 2010 federal statute.