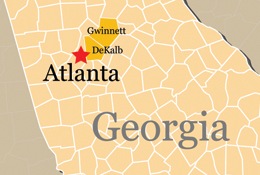 For nearly four years, four leaders of various Mara Salvatrucha, or MS-13, factions operating in the Atlanta metro area terrorized the community through their flagrant disregard for life—conspiring to commit senseless acts of murder, attempted murder, and armed robbery.

But a multi-year, multi-agency law enforcement effort recently took down this criminal enterprise, eradicating a deadly threat from the streets of Atlanta. Ernesto Escobar, Miguel Alvarado-Linares, and Dimas Alfaro-Granados will be spending the rest of their lives in prison, while Jairo Reyna-Ozuna will be behind bars for more than a decade.

The MS-13 gang is composed primarily of immigrants and/or their descendants from El Salvador, Guatemala, and Honduras. In the U.S., this extremely violent criminal organization got its start in Los Angeles and then spread out to a number of states around the country, including Georgia.

In Atlanta, as in other areas, members are usually organized into groups called “cliques” that operate under the larger MS-13 umbrella. Each clique has a leader who conducts regular meetings to plan and discuss crimes against rival gangs. In this case, we saw clique leaders reporting back to MS-13 leaders in their home countries about MS-13 activities in the Atlanta area.

The four defendants in this case, who reportedly lived by the credo “rape, kill, control,” perpetrated their crimes for seemingly minor reasons—to enhance their reputations among fellow gang members, to protect their turf from rival gangs, or to exact revenge for a real or perceived slight. The robberies were usually committed to obtain funding to support the criminal enterprise, providing money and weapons to gang members—including incarcerated individuals in the U.S and elsewhere.

Some of the heinous crimes the defendants were charged with included:

The case was investigated by the Atlanta Safe Streets Task Force, made up of investigators from local, state, and federal agencies, including the FBI. Another key partner was the U.S. Immigration and Customs Enforcement’s Homeland Security Investigations Directorate.

Federal participation in this case allowed a number of effective tools to be brought to the table—perhaps most importantly the RICO (Racketeer Influenced and Corrupt Organizations) and the VICAR (Violent Crimes in Aid of Racketeering) statutes with their tougher penalties. Investigators also made use of physical and court-authorized electronic surveillances and confidential informants.

The charges against the four subjects in this case were part of a broader multi-agency investigation of MS-13 in Atlanta, concluded in 2010, which resulted in arrests of, charges against, and/or deportation of 75 members.

Proof positive that dedicated, cooperative efforts among law enforcement agencies can and do win out over dangerous criminal conspiracies.