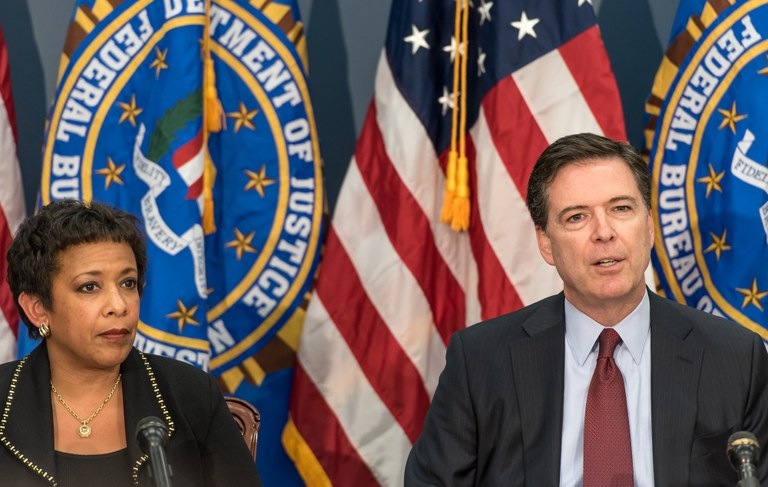 Director Comey and Attorney General Lynch Speak During a Press Availability about the Mass Shooting in San Bernardino, CA

The FBI announced today that it is assuming a leadership role in the investigation into the mass shooting that occurred earlier this week in San Bernardino, California, and that the attack that killed 14 people and injured 21 others has been deemed an act of terrorism.

“This is now a federal terrorism investigation, led by the FBI,” said Director James Comey, speaking to reporters at FBI Headquarters in Washington, D.C. He was joined by Attorney General Loretta Lynch. “The reason for that,” Comey said, “is that the investigation so far has developed indications of radicalization by the killers and of the potential inspiration by foreign terrorist organizations.” The Bureau’s work, however, continues in close cooperation with our federal, state, and local partners.

The FBI is in possession of a large volume of electronic evidence that belonged to the husband and wife shooters, Syed Rizwan Farook and Tashfeen Malik. Comey said the couple tried to conceal and destroy electronic evidence before they were killed in a shootout with police Wednesday.

Comey assured the public that the FBI is working as fast as it can to find answers. “We aspire to do it quickly,” he said, “but we most of all aspire to do it well and do it carefully.”

Comey also urged the public to be vigilant but not to live in fear. “Do not let fear become disabling,” he said, adding that it’s important “if you see something that doesn’t make sense, you say something to somebody.” Doing this, Comey explained, will “let us do the work that you pay us to do, which is to investigate and fight terrorism while you live the lives that are so wonderful in this great country of ours.”

Our New York Joint Terrorism Task Force has served as a model for others for 35 years.