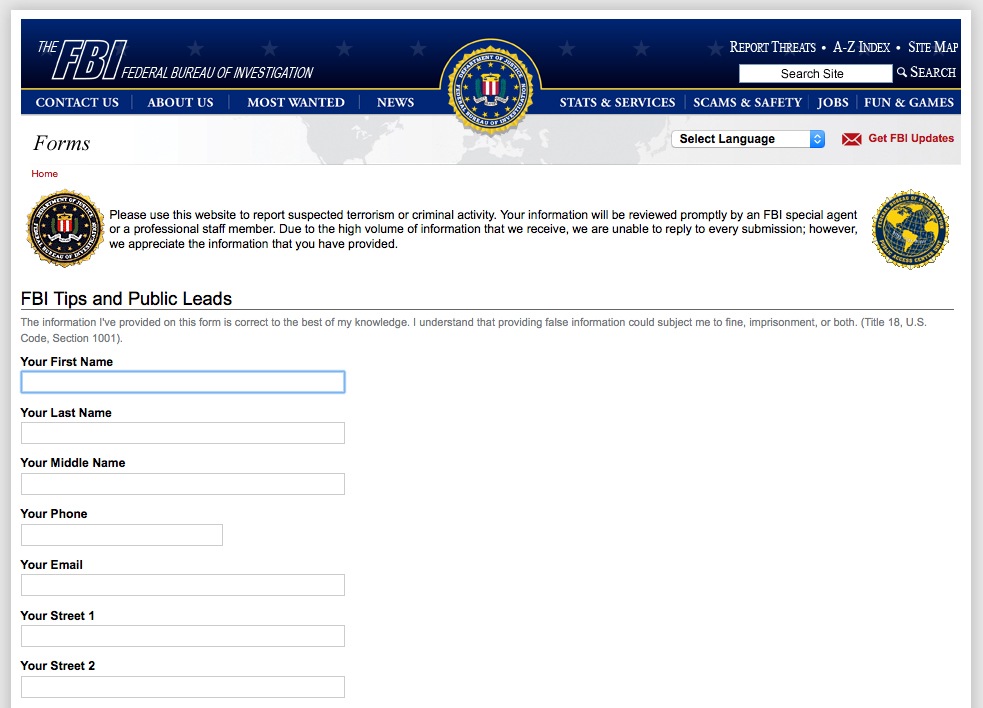 The FBI’s global tip line, at tips.fbi.gov, was established in 2001 after the 9/11 terrorist attacks.

In the pre-dawn hours of October 22, 2014, a New Hampshire man was browsing a popular Internet message board when he came across what appeared to be an anonymous threat: “I’m going to shoot up University of Louisville’s Miller hall [sic] tomorrow at 10 a.m.”

The man went to the FBI website and submitted a tip at 4:23 a.m. Eastern Time. “Some idiot is making threats,” he wrote on tips.fbi.gov, and included a link to the suspicious post. Within a minute, an FBI agent in the unit that administers the FBI’s global tip line picked up the tip, setting in motion a process that happens on average 1,300 times a day. Several analysts assessed the tip and deemed it credible. The unit’s supervisory special agent immediately called the university’s campus police as well as local police. They were on the scene by 8 o’clock that morning and quickly arrested an 18-year-old student suspected of posting the threat.

The case illustrates how a tip—no matter how cryptic, innocuous, or far-fetched the information may seem—can help prevent violent acts. Tips to the FBI have led to captures of Top Ten fugitives and short-circuited scores of criminal and terrorist plots. Established in 2001 in the wake of the 9/11 terrorist attacks, the tip line receives about 100 “actionable” tips every day related to possible criminal, cyber, terrorism, and espionage acts. Since its inception, the public has submitted more than four million tips via the Internet at tips.fbi.gov. In addition, phone calls to FBI field offices result in thousands of pieces of reporting a day.

“We will check them all,” said William Dayhoff, head of the tips unit, which is staffed around the clock by about two-dozen Bureau employees. In most cases, after tips are assessed they are routed to FBI field offices and local law enforcement agencies for follow-up.

Intensified efforts by foreign extremist groups to radicalize individuals in the U.S.—and recent arrests of individuals apparently heeding their call—raise the necessity for the public to send tips or contact their local field office when something looks awry.

“We don’t want to wait for an incident,” said Jane Rhodes-Wolfe, of the FBI’s Counterterrorism Division. “The whole push is for us to identify the next shooter or the next bomber who goes from troubled thoughts to evil deeds.”

Dayhoff said the public shouldn’t worry about whether a tip contains good or bad information. The most helpful tips, however, contain context—the more information, the better. Sometimes it’s like a mosaic, with different pieces coming from different places. In the case of the Louisville school threat, the tip was submitted by an individual nearly 1,000 miles away. In the 48 hours after the Boston Marathon bombing in 2013, more than 50,000 tips were submitted to the FBI, half of those through tips.fbi.gov. “It’s our job to put the pieces together,” Dayhoff said.

Some of the most valuable tips come from people closest to subjects—people who can see changes in mood and habits and can make a common-sense assessment that things aren’t right.

Rhodes-Wolfe said she understands that it can be a very hard decision for someone to contact the FBI. “We don’t take that lightly,” she said. “But this is a way you can help family members or friends, and potentially save lives.”

Testing will evaluate the workflow and operational efficiency of the new system.