STEM and the FBI

Recruiting the Best and the Brightest 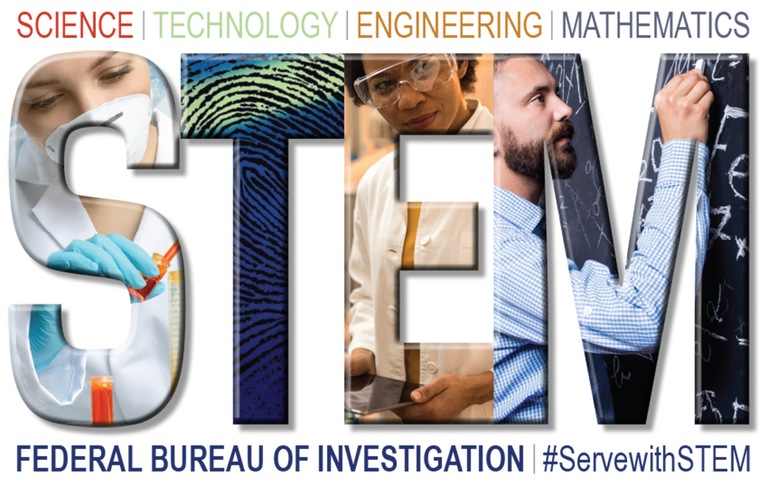 The acronym STEM—science, technology, engineering, and mathematics—describes a range of academic disciplines that have become more important than ever to the FBI’s mission of protecting the American public.

“The country’s enemies, be they terrorists, computer hackers, spies, or financial fraudsters, are exploiting the newest technologies at every turn,” said Special Agent Avatar Lefevre. “If the FBI doesn’t recruit and train the best qualified people in the STEM fields, our adversaries will undoubtedly gain an advantage.”

Lefevre heads a unit in the FBI’s Human Resources Division created two years ago to specifically recruit individuals with cyber skills. But he pointed out that “employees with STEM backgrounds are required across the entire gamut of FBI programs.” And that applies not just for special agents, but also analysts, engineers, and a variety of scientists and other professionals who help solve crimes through the analysis of DNA, fingerprints, trace evidence, and other cutting-edge methods.

“With regard to the cyber realm,” Lefevre said, “the FBI has computer scientists, computer engineers, IT specialists, digital forensic examiners, electronics engineers, electronics technicians, and computer analysis and response teams.” He added, “We are also moving heavily into data analytics. We have needs for data analysts and data scientists. Those are just a few of the positions specific to the cyber field.”

Industry is also competing for highly skilled STEM employees, Lefevre noted, and private companies often pay more than one can make as a public servant. But salary is not the only thing to consider when contemplating a career.

On November 8, 2017—National STEM Day—the FBI hosted a live Twitter chat on to answer questions about STEM and the FBI. During the conversation, employees from across the Bureau answered questions and provided resources for those interested in learning more about STEM at the FBI.

Recruiting individuals with STEM training is a top priority for the FBI, and Bureau personnel regularly visit colleges across the country to talk with prospective job candidates. “We are now also working at the high school level doing the same thing,” Lefevre said, “to let kids know at an earlier age that the FBI is here and we are doing a lot of cool things they might not know about. We want to put the FBI on their radar.”

Reaching out to a younger audience is important. “If you think the FBI is something you might like to do in the future, now is the time to start planning,” Lefevre said. Because of the Bureau’s exacting security clearance process, “young people have to be aware that their actions now will have a bearing on their ability to gain government employment later,” he explained.

“We are the FBI. We are the ones expected to stop the next potential terror attack,” he said. “We have high standards, and we are going to make sure that you are the best person for this organization before we give you that job offer.”

On the other hand, he added, some would-be job candidates rule themselves out before ever applying. “My experience is that some folks think they are not competitive enough,” Lefevre said. “My recommendation to them would be to apply—you have no idea until you apply.”

“At the FBI, if you have a computer science or engineering degree or some other technical background, you are going to do things you would not likely do anywhere else.”

Putting Your STEM Skills to Work at the FBI

Recruiting job candidates with STEM backgrounds is a top priority for the FBI. There are a range of STEM-related careers at the Bureau, including special agents, analysts, scientists, and a variety of other professional staff.

A father and son who headed up two Chicago-area tutoring companies were sentenced to federal prison for running a scam that short-changed low-income students in more than 100 school districts around the nation.