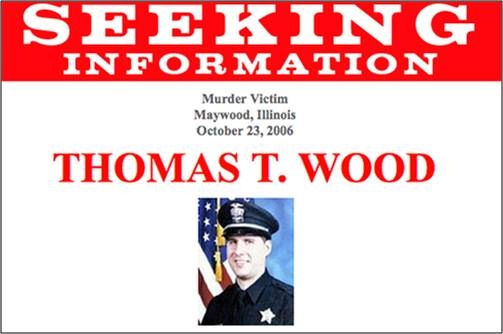 The FBI continues to seek information on the nine-year-old murder of Maywood, Illinois police officer Thomas T. Wood, who was shot by an unknown subject while sitting in his police vehicle on October 23, 2006.

Wood, a nine-year veteran of the Maywood Police Department, was on duty in his marked patrol sports utility vehicle, with his K-9 partner in the back seat, when he was shot at approximately 10:30 p.m. at the intersection of 6th Avenue and Erie Street in Maywood. The K-9 was not injured. During its investigation, the Maywood Police Department requested the assistance of the FBI. Agents from the Chicago Field Office’s West Resident Agency began conducting interviews and have since followed leads generated over the past nine years.

The slain officer was 37 years old at the time of his death and left behind a wife and five children.

If you believe you have may information about the shooting, please contact your local FBI office or the nearest American Embassy or Consulate.

Inside the investigation of a construction boss behind a $58 million HOA scam.

Cyber Tip: Social Media and the Use of Personal Information

This week’s FBI cyber tip is on the risks of posting personal information to social networking sites and how users can minimize those risks.