A handwritten letter by Charles Darwin that was stolen from the Smithsonian Institution Archives more than three decades ago was recovered by FBI special agents and returned last week to the care of the Smithsonian.

The letter, written in 1875 by the British naturalist and geologist best known for his theory of evolution, was stolen in the mid-1970s from a collection of correspondence and documents relating to the history of North American geology. The FBI received a tip about the letter earlier this year, and special agents on the Bureau’s Art Crime Team recovered the artifact. There are no criminal charges pending in the case because the statute of limitations has expired.

“Thanks to a tip from a member of the public, we were able to return this artifact to the care of the Smithsonian Archives,” said Paul Abbate, assistant director in charge of the FBI’s Washington Field Office. On May 26, he turned the letter over to Anne Van Camp, director of the Smithsonian Archives. “It’s a privilege,” Abbate said in a statement, “to return a piece of the history of science and exploration in the United States to the American people.”

The letter, written to American geologist Ferdinand Vandeveer Hayden, was part of the George Perkins Merrill Papers. Merrill was head curator of the Department of Geology in the early 1900s at what is now the National Museum of Natural History in Washington, D.C. Smithsonian conservators worked closely with FBI art crime experts to authenticate the Darwin letter, which went missing before it was cataloged in the Smithsonian Archives. Smithsonian experts were able to compare the letter to another one in their collection that Darwin wrote to Hayden.

“This is an important event, as this type of crime is not easily detected, and it demonstrates how seriously the FBI regards our cultural heritage,” Van Camp said. The fact that the recovered letter is dated—May 2, 1875—adds a measure of context and value to the collection, Smithsonian officials said. 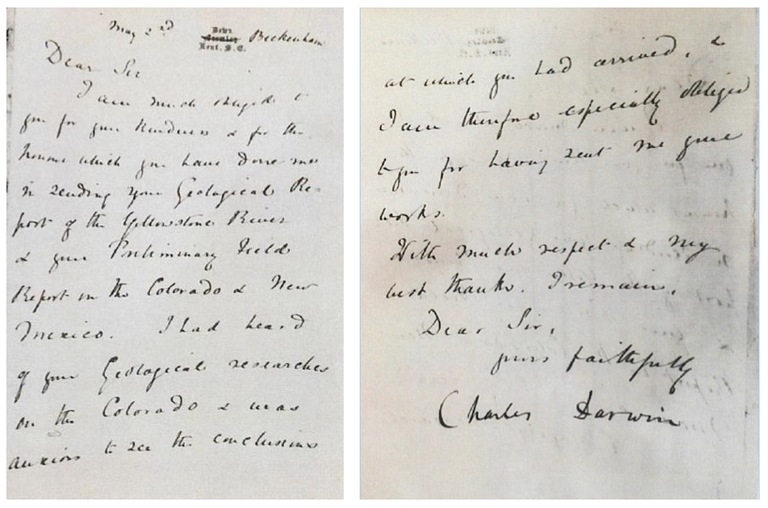 In the letter, Charles Darwin wrote to Hayden to thank him for sending two geological field studies of the American West, including the region that became Yellowstone National Park.

The text of the letter reads as follows:

May 2nd
Dear Sir,
I am much obliged to you for your kindness & for the honour which you have done me in sending your Geological Report of the Yellowstone River & your Preliminary Field Report on the Colorado & New Mexico. I had heard of your Geological researches on the Colorado & was anxious to see the conclusions at which you had arrived, & I am therefore especially obliged to you for having sent me your works.
With much respect & my best thanks, I remain,
Dear Sir,
yours faithfully
Charles Darwin

FBI Special Agent Martin Licciardo was a supervisor on the case and worked closely with Art Crime Team agents, who are trained in art and cultural property crime investigations. Members of the team are assigned to geographic areas around the country, including one at the Washington Field Office.

“The fact that we’re able to take a piece of history that’s so valuable to our generation and the fact that it can be on display for future generations to enjoy in the hands of its rightful owner—and not in some location where it shouldn’t have been—it’s pretty amazing,” Licciardo said.

An Alaska man was sentenced to 18 years in prison for crimes he committed in Cambodia.