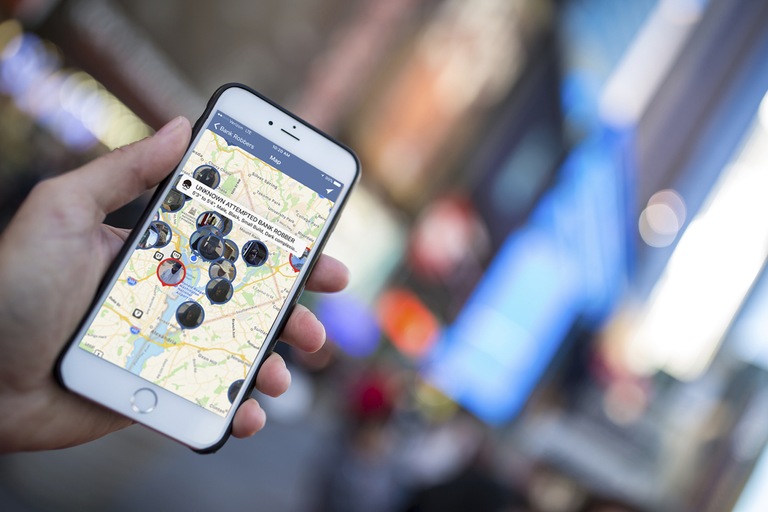 The app, which works with bankrobbers.fbi.gov, can be downloaded for free from Apple’s app store or Google Play.

Back in December 2012, the FBI launched its Bank Robbers website featuring a gallery of unknown bank robbery suspects wanted by the Bureau. Because the FBI, in its own bank robbery investigations, focuses on the most violent and/or the most prolific serial offenders who often cross jurisdictions, the suspects included on bankrobbers.fbi.gov are a dangerous lot and public assistance in identifying them plays a crucial role in our efforts to apprehend them.

Today, we’re enhancing our efforts to publicize these dangerous criminals by launching our mobile Bank Robbers application for iPhones (plus iPads and iPods) and Android smartphones, which should make it even easier for the public—as well as financial institutions, law enforcement agencies, and others—to view photos and information about bank robberies in different geographic areas of the country. The app, which works with bankrobbers.fbi.gov, can be downloaded for free from Apple’s app store or Google Play.

Using the app, bank robberies can be sorted by the date they occurred, the category they fall under (i.e., armed serial bank robber), the FBI field office working the case, or the state where the robbery occurred. If the location services on your device are enabled, you can view a map that shows the relevant bank robberies that took place in your geographic area. You also access surveillance photos, physical description information, robbery details, and the FBI’s wanted poster for each suspect. Users can select push notifications to be informed when a bank robbery has taken place near their location.

Additionally, the app provides quick access to a link directly to the FBI online tips page so users can contact us immediately if they have information on any of the robberies or suspects.

Some of the unknown bank robbers currently being sought by the FBI include:

“We focus our investigative resources on those suspects who pose the greatest safety threats to the public, and our new Bank Robbers mobile app is another tool we can use to help mitigate those threats.”

According to the FBI’s bank crime statistics for 2015, there were 4,091 robberies, burglaries, and larcenies committed under the federal bank robbery statute in a variety of financial institutions—including commercial banks, savings and loan associations, credit unions, and armored carrier companies. Demand notes were a favorite tool used by bank robbers (2,416 times), but actual firearms were used 877 times, the threat of weapons was used 1,762 times, and explosive devices used or threatened occurred 108 times. 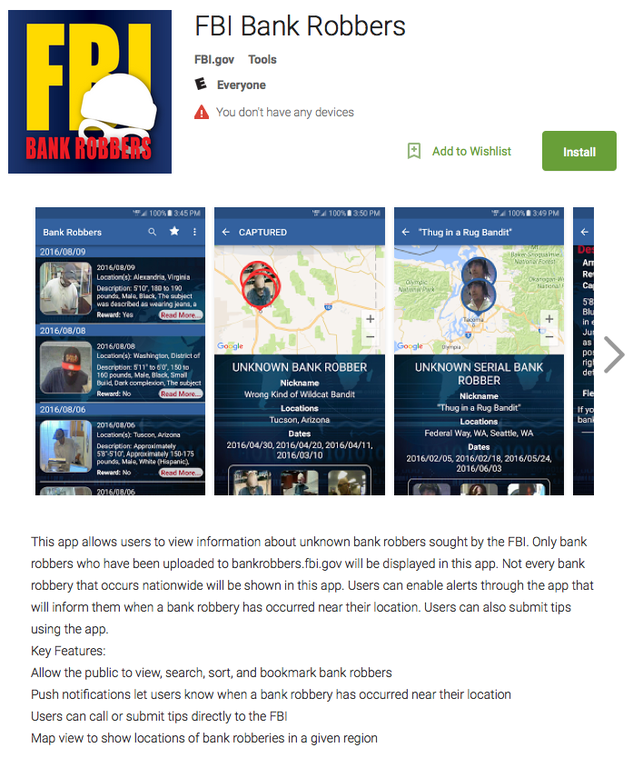 The Bank Robbers mobile app is available for download on iPhone and Android devices.

The mobile app, which works with bankrobbers.fbi.gov, can be downloaded for free from Apple’s app store or Google Play:

That’s certainly proof that these crimes—and these criminals—can be extremely dangerous. And during 2015, actual acts of violence—from discharging a firearm to setting off explosives to committing assaults—were committed in 137 of the 4,091 incidents. Unfortunately, these violent acts led to 57 injuries, nine deaths, and 66 people being taken hostage.

The FBI continues to provide assistance to state and local partners investigating bank robberies, according to Gregory Adams, chief of the FBI’s Violent Crimes Unit in Washington, D.C. “But we focus our investigative resources on those suspects who pose the greatest safety threats to the public” he explained, “and our new Bank Robbers mobile app is another tool we can use to help mitigate those threats.”

The FBI’s Bank Robbers website—and the new Bank Robbers mobile app—were created to help publicize unknown violent and/or serial bank robbery suspects who are wanted by the Bureau. The publicity works and really does help to get dangerous criminals off the streets.

After the website featured a suspect believed to have been responsible for 11 armed takeover style robberies in Delaware and Pennsylvania, local police received a tip in the mail which broke the case open—a printed page from the Bank Robbers website featuring the unknown suspect believed responsible for the robberies. Across the piece of paper was a handwritten name. A subsequent investigation led to the positive identification of the suspect as well as charges being filed against him in both states. That suspect is currently awaiting trial.

The FBI has always depended on the assistance and the support of the public in carrying out its mission, beginning back in its early days when some of our wanted criminal posters were tacked up onto post office walls. But today’s technology—like websites and apps—can work as force multipliers and allow us to ask for and receive assistance from larger segments of the public.

Hundreds of aspiring special agents gathered in Washington, D.C. at a recruitment event for qualified candidates of diverse racial and ethnic backgrounds.