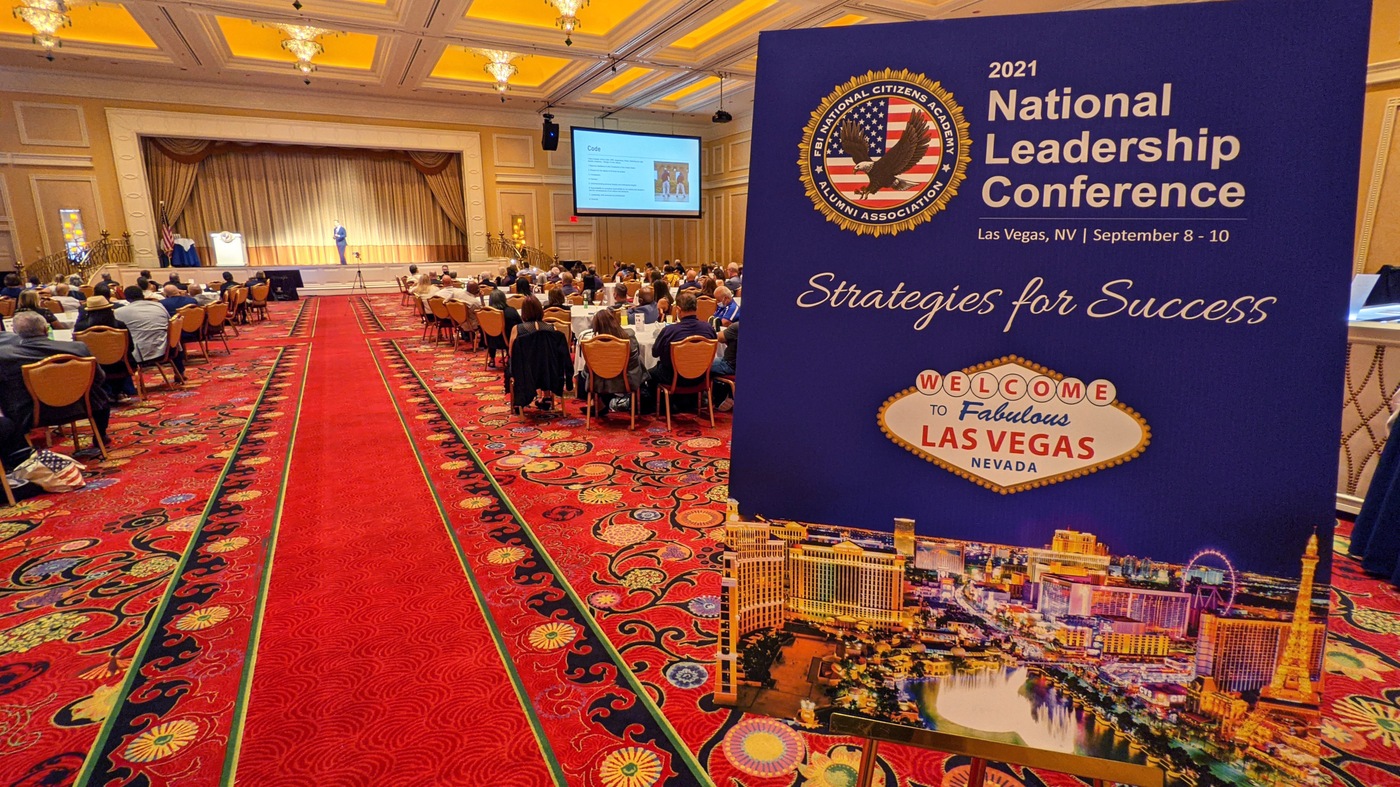 Members from 58 chapters of the non-profit FBI Citizens Academy Alumni Association gathered for a National Leadership Conference in Las Vegas in September.

Nearly 30 years ago, the FBI launched a Citizens Academy in its Phoenix Field Office to give local civic leaders a behind-the-scenes look at how the Bureau investigates crimes and national security threats. Over the course of several weeks, participants learned from FBI personnel the finer points of investigating crime scenes, protecting civil rights, firearms safety, and how the FBI relies on partnerships to protect and serve the community.

Today, every one of the FBI’s 56 field offices hosts a Citizens Academy, and more than 45,000 people have graduated from the six- to eight-week program. Many find it so rewarding they join their local chapters of the non-profit FBI Citizens Academy Alumni Association, which supports the FBI’s mission through local volunteer work that highlights safety awareness and the Bureau’s essential role in the community.

FBI leaders recently recognized the alumni association’s 58 chapters and their uniquely local efforts to help their neighbors while also helping the FBI carrying out its mission to protect and serve.

Alicia Wadas, president of the FBI Citizens Academy Alumni Association, reflects on the role of the non-profit organization.

“Everything the FBI is trying to accomplish depends upon having the trust and support of the American people,” FBI Deputy Director Paul Abbate said at the group’s annual conference in Las Vegas in September. “You spent time during your weeks at the Citizens Academy getting to know us. And now as alumni, you’re taking time to educate your friends and neighbors about us. By doing so, you’re building bridges between law enforcement and your communities.”

FBI field offices invite local community, civic, and religious leaders to join the Citizens Academy to help build lines of communication between the FBI and the neighborhoods it serves. Like their communities, every alumni association is different, with a unique set of needs.

For example, in Norfolk, the local chapter partnered with the FBI field office there to develop and host recruitment seminars that emphasized diversity, women, and careers in science, technology, engineering, and math (STEM). The Boston chapter donated hundreds of masks and hand sanitizers to local shelters, veterans’ facilities, and community centers at the onset of the pandemic. In Albuquerque, the alumni association chapter formed a rapid response team to serve meals and snacks to first responders.

“Everything the FBI is trying to accomplish depends upon having the trust and support of the American people.”

The Minneapolis chapter was recognized with the national organization’s top community service award for donation drives to support human trafficking victims and families in the Twin Cities that were affected by civil unrest after the death of George Floyd. Every chapter has similar initiatives, along with scores of unsung heroes.

“I never want you to think your service goes unnoticed,” Deputy Director Abbate told hundreds of conference attendees. “The work you’re doing is not only the foundation for the FBI’s success at the local level, it’s the very definition of community and citizenship.”

Karen Corrigan, president-elect of the national board of the FBI Citizens Academy Alumni Association, describes the organization's role and how the non-profit supports the FBI and the communities it serves.

Alicia Wadas has served as the alumni association’s national board of directors president since January. In 2007, the marketing and advertising executive helped a client develop a safe online surfing campaign for the alumni association, which she had never heard of. She was invited to the Phoenix Field Office’s Citizens Academy the following year, and has been involved as an alum ever since.

“This is service above self,” she said, “and we’re all here working toward that goal to work with our friends in the FBI, to help them extend their community outreach so that they ultimately can keep us all safe.”

Tracey Ballinger, a program manager in the FBI’s Community Relations Unit, has largely overseen the Citizens Academy program and the Bureau’s relationship with the non-profit organization and its chapters since the beginning 28 years ago. She said alumni play an outsize role in amplifying the FBI’s message.

“They do this by providing public education programs to raise awareness of community safety issues such as cybercrime, opioid addiction, human trafficking, hate crimes, and online scams,” Ballinger said. “They are one of the FBI’s true gems.”

Karen Corrigan of the Norfolk Alumni Association chapter is president-elect for the national organization and begins her term in January. She echoed the sentiments of others who described why they have stayed connected to the FBI long after their Citizens Academy tour was over. Like the FBI’s mission, she said it boils down to wanting to serve while keeping people safe.

“We can see opportunities in communities,” Corrigan said.  “We can also see problem areas in communities. And I think being able to connect our knowledge and connections with the FBI’s expertise and ability, it just makes it work harder. All of us want to live in safe communities, right? We want our children and our grandchildren to grow up in those communities. So, I've found this to be a really effective partnership for doing that.”

“All of us want to live in safe communities. We want our children and our grandchildren to grow up in those communities. So, I've found this to be a really effective partnership for doing that.”

The Chief Information Security Officer Academy gives select personnel at private sector companies a chance to connect with FBI cyber experts and learn how to work with the FBI and partners when a cyber breach occurs.

Yulan Adonay Archaga Carias, the alleged leader of MS-13 for all of Honduras, has been added to the Ten Most Wanted Fugitives list, and the FBI is offering a reward of up to $100,000 for information leading directly to his arrest.