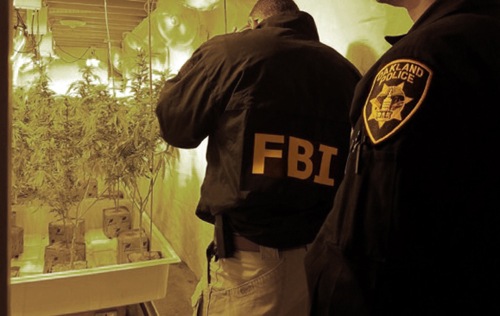 While searching for shell casings from a weapon that gang members used to kill an Oakland, California man in September 2015, FBI agents and Oakland Police Department detectives on the Homicide Task Force came across a marijuana grow operation in the warehouse where the victim was tortured before his murder.

On a peaceful, sunny morning in downtown Oakland, California, it is difficult to comprehend that the city across the bay from San Francisco is one of the most violent places in the country, with a murder occurring on average every three days. Inside the headquarters of the Oakland Police Department (OPD)—where homicide detectives and FBI agents were meeting—that reality is all too clear.

Seventeen months ago, the FBI dedicated 10 special agents to work alongside OPD detectives to investigate active homicides and more than 2,000 cold case murders that have taxed the department’s historically understaffed homicide detective squad.

On this morning, agents and detectives comprising the Homicide Task Force were discussing their most pressing investigations—almost all related to gangs and drugs—and how best to solve them. An OPD detective mentioned that a key witness in one of his cases had fled to Texas. FBI Special Agent Russ Nimmo, who leads the partnership effort, said agents in Texas could locate the witness there and arrange for an interview. “We can help with that,” he said.

It’s just one example of how the FBI adds value and depth to OPD murder investigations. Not only does the Bureau assist by pursuing leads in other states but agents also conduct interviews, execute warrants, and, when necessary, deploy specialized resources such as the SWAT team and the Evidence Response Team. The FBI can also collect and process critical firearms and DNA evidence, which may be too time-consuming and costly for OPD to take on alone. This real-time partnership gives local detectives a federal reach they did not have before—and in many cases that means violent offenders are also charged federally, which can result in stiffer sentences.

“This effort with OPD is designed to be sustained and ongoing,” Nimmo says. “It is important to solve every murder, whether it occurs in a wealthy neighborhood or a poor one. We are showing the community that the FBI is not just something you see on TV or read about in newspapers. We are working to provide justice in communities where many people feel that nobody cares about them.”

“This is a valuable partnership,” added Lt. Roland Holmgren of the OPD Homicide Unit, “and we are seeing the fruits of our combined labors.”

Since the FBI-OPD effort officially began in June 2014, the task force has cleared twice as many murders as had been cleared in the past—a rate that increased from about 30 percent of homicides to 60 percent. And the task force is actively working its backlog of cold cases as well.

At OPD headquarters, a dedicated workspace for the task force was set aside and is being renovated using funds from both the Bureau and the city. Detectives and agents are expected to occupy their new, permanent quarters by the end of the year. The space will feature state-of-the-art equipment to aid in recording and reviewing subject interviews. Agents and detectives will also have access to FBI computer systems to aid their investigations.

Nimmo explained that the Bureau has many Safe Streets Task Forces around the country—consisting of local, state, and federal law enforcement partners—working to fight violent crime. The effort to embed FBI agents with OPD detectives represents an additional commitment. “And it sends a message,” he said: “If you kill someone in Oakland, we will catch you.”

One case the FBI worked jointly with OPD was a December 2013 drug-related murder in East Oakland that occurred in the parking lot of a large chain store a few days before Christmas. Damion Sleugh had arranged to buy five pounds of marijuana from 24-year-old Vincent Muzac. The deal went bad, and Sleugh shot Muzac, dumping his body in the parking lot before driving off.

With the FBI’s assistance, Sleugh was indicted federally in March 2014 on first-degree murder and other charges. A jury convicted him in July 2015, and last week the 28-year-old was sentenced to life in prison.

Nimmo has been working to help OPD detectives since 2010. “The Sleugh case, along with several others, made us realize the greater federal impact we could have if more agents were fully staffed with OPD detectives,” he said. “The results so far are not surprising, given the quality of agents and detectives assigned to the task force.” He added, “This level of partnership over this length of time is making a real difference, but there is still much more work to be done.”

One of the more than 2,000 cold cases being worked by the FBI-OPD Homicide Task Force is the 2013 murder of Aya Nakano, who was gunned down an hour before his 23rd birthday after a traffic incident in Oakland. In September, the FBI announced a reward of up to $25,000—in addition to a separate significant reward offered by Nakano’s family—for information leading to arrests and prosecutions.

The FBI and the Oakland Police Department are asking for the public’s help to identify the two individuals responsible for the murder, which occurred around 11 p.m. on June 12, 2013.  The Bureau’s National Digital Billboard Initiative is also featuring the case as part of the public awareness campaign.

Nakano was driving home to Emeryville, California, when his car was involved in a minor accident with a silver, four-door sedan with tinted windows. The accident occurred at the intersection of Stanford Avenue and Market Street. After the accident, Nakano pulled over near the intersection, as did the sedan. Two suspects emerged from the sedan and fatally shot Nakano before driving away.

Anyone with information regarding the case should contact the Oakland Police Department at (510) 238-7950, their local FBI office, or the nearest American Embassy or Consulate.