Oil and Crime in Indian Country 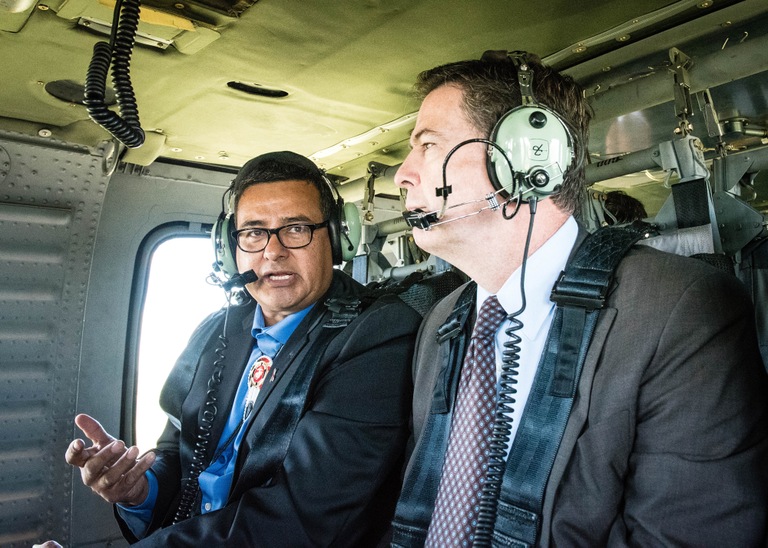 FBI Director James B. Comey joins Mandan, Hidatsa, and Arikara Nation Tribal Chairman Mark Fox for an aerial tour of Fort Berthold Indian Reservation in northwestern North Dakota on June 6, 2016. During the tour, Fox described how the communities and landscape below have been impacted by the sharp influx in oil drilling since 2008. The tour was part of Comey’s visit to the reservation, where he met with state, local, and tribal leaders to discuss the Bureau’s support in fighting rising crime caused by the oil boom.

Since 2008, a remote Indian reservation in northwest North Dakota has seen an explosive increase in crime following a now-waning oil boom in the region.

But while oil drilling and production has slowed in Fort Berthold, illegal activity like drug and human trafficking, prostitution, domestic abuse, and homicides are still on the rise. And limited resources have strained the ability of tribal police and the sheriff’s department to respond quickly to incidents that have been occurring across six different counties in the area.

“We’ve been struggling with an increase in crime at Fort Berthold over the last seven or eight years, and we’re actually getting a little bit desperate,” said Mark Fox, tribal chairman of the Mandan, Hidatsa, and Arikara (MHA) Nation on the reservation. “The illegal activity here is literally killing our people and tearing us apart.”

Later that day, Comey helped celebrate the opening of a new FBI resident agency in Williston, North Dakota, the result of collaborative efforts by North Dakota officials to gain additional Bureau support. Comey said three special agents and support staff assigned to the office will allow other FBI resources to point their efforts toward Fort Berthold.

“The opening of our office in Williston should have a real-life impact on Fort Berthold,” Comey said. “We’re going to look at what effect that has on the resources we already have and think about what more we could do.”

The opening of the new office comes at a time when FBI agents and other personnel stationed at Bureau’s Minot Resident Agency were traveling between Williston and Fort Berthold to investigate crimes and assist partner law enforcement agencies. Comey said additional resources will provide a greater sense of relief and allow staff to spend more time in the region.

“The significance of the work Director Comey has done to establish an FBI presence in Williston is absolutely remarkable,” said North Dakota U.S. Attorney Christopher Myers. “The presence of the FBI in the Bakken has tripled since the push has been made to get more FBI resources, which is a great thing.”

All of the officials at the New Town meeting, including Comey, agree that there is more work to be done to stem the flow of crime on the Fort Berthold Indian Reservation, and measures are already being considered to strengthen partnerships.

With the opening of the new Williston office and the discussions during this week’s visit, Comey said he is considering the reinvigoration of an FBI Safe Trails Task Force, which existed in the area years ago.

Currently, there are 15 Safe Trails Task Forces operating throughout the United States. Their purpose is to unite the Bureau with other federal, state, local, and tribal law enforcement agencies in a collaborative effort to combat crime in Indian Country, especially violent crime, drug crime, gangs, and gaming violations. On June 6, 2016, FBI Director James B. Comey presided over a ribbon-cutting ceremony to officially open the Bureau’s newest facility in Williston, North Dakota. He was joined by Special Agent in Charge Richard T. Thornton of the Bureau’s Minneapolis Division, which includes both North Dakota and South Dakota in its jurisdiction.

“This is exciting day for all of us who care about the communities that we live in and serve,” said Comey. “I want to let our partners know this building was built big enough to accommodate the task forces we need to keep this community safe, and together we will do tremendous good.”

Establishing a permanent presence in Williston was in response to the growth in illegal activity in western North Dakota, especially following the region’s oil boom in 2008.

“Having FBI personnel working and living in this community is an important part in our relationship with state, local, and federal law enforcement partners,” said Thornton. “The Williston office will allow the FBI to stay ahead of both criminal and national security threats in the region.” 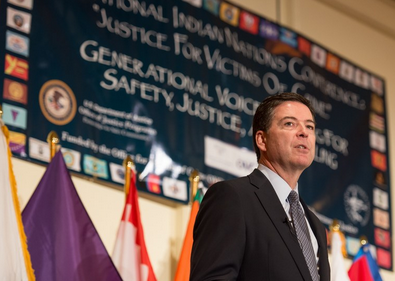 At the 14th National Indian Nations Conference on the reservation of the Agua Caliente Band of Cahuilla Indians in California, FBI Director James Comey pledged the Bureau’s “unshakeable” commitment to tribal nations.

A stolen 1875 letter is back at the Smithsonian after being recovered by the Art Crime Team.