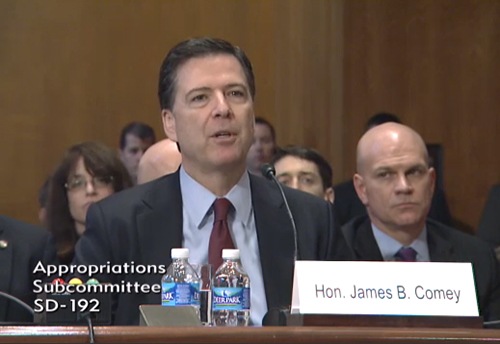 Director James B. Comey testifies before the Senate Appropriations Subcommittee on Commerce, Justice, Science, and Related Agencies on the FBI’s fiscal year 2016 budget request on March 12, 2015.

Appearing today before a U.S. Senate appropriations subcommittee, Director James Comey briefed members on the FBI’s fiscal year 2016 budget request and on the wide range of threats, crime problems, and operational challenges facing the Bureau and the nation.

According to Comey, preventing terrorist attacks continues to be the FBI’s top priority. “The terrorist threat against the United States remains persistent and acute,” he explained, especially threats posed by homegrown violent extremists and by foreign fighters—including those recruited from the U.S.—traveling to join ISIL. He cited the use of the Internet and social media by terror groups to recruit and to encourage attacks. But Comey also highlighted collaboration with our domestic and foreign partners and the capabilities of our Terrorist Explosive Device Analytical Center (TEDAC) as examples of how we work to combat the terror threat to the U.S.

The Bureau also remains focused on countering the threat from hostile foreign intelligence agencies looking for state and military secrets, commercial trade secrets, research and development information, and intellectual property, as well as on the growing scope of the insider threat—trusted employees and contractors who use their legitimate access to steal secrets. Said Comey, “These illicit activities pose a significant threat to national security.”

Another top priority, according to Comey, is the sophisticated cyber threat from state-sponsored hackers, hackers for hire, organized crime syndicates, and terrorists. In addition to using technical capabilities and traditional investigative techniques while working with partners in the U.S. and abroad, the FBI is engaged in other cyber efforts to identify threats, share information inside and outside of government, and develop and retain new cyber talent within the Bureau. “An element of virtually every national security threat and crime problem the FBI faces is cyber-based or facilitated,” testified Comey.

The FBI also continues to focus on a number of significant criminal threats—predominately worked in conjunction with local, state, federal, and, increasingly, international partners—such as public corruption (the top criminal priority for the FBI), violent crimes and gang activities, transnational organized crime, and crimes against children.

Comey discussed how the Bureau is using technology to “improve the way we collect, analyze, and share information,” specifically mentioning the new Next Generation Identification System and the upcoming Biometrics Technology Center. But he also talked about how the “rapid pace of advances in mobile and other communication technologies continue to present a challenge to conducting court-ordered electronic surveillance of criminals and terrorists.”