Efforts Are Targeting an Increase in Violent Crime 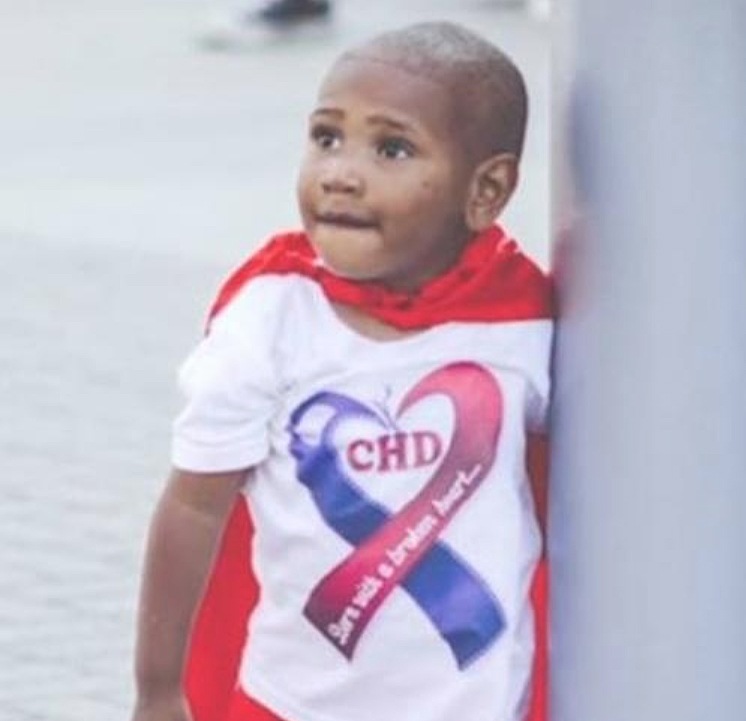 In support of Operation Legend, the FBI is combining resources with its federal, state, and local law enforcement partners in nine cities where there has been a troubling uptick in violent crime.

The initiative was named after a 4-year-old boy, LeGend Taliferro, who was killed by gunfire while asleep in his Kansas City, Missouri, home. LeGend’s city was the first area to receive additional resources when Attorney General William Barr announced the launch of Operation Legend on July 8, 2020.

The operation has since expanded to include support for Albuquerque, Chicago, Cleveland, Detroit, Indianapolis, Memphis, Milwaukee, and St Louis.

“There’s been a significant increase in violent crime in various parts of the country,” said Calvin Shivers, the assistant director of the FBI’s Criminal Investigative Division. “Operation Legend is an initiative to surge resources across the Department of Justice to those cities to address that spike in crime.”

Shivers said the FBI has provided additional agents, but has also brought in support from across the Bureau. The FBI’s intelligence analysts, digital evidence experts, field office personnel, and professional staff are supporting efforts to get to the root causes of the crime increases in Kansas City, Chicago, and other Operation Legend cities.

“What we bring to the table is the ability to target some of the most violent offenders in the short term while pursuing a longer term strategy to dismantle entire criminal organizations,” Shivers said.

“Operation Legend has allowed us to surge additional resources to these areas that are seeing an unacceptable increase in violence,” said FBI Deputy Director David Bowdich. “These crimes unsettle communities and threaten the sense of safety we all deserve to have when we put our children to bed at night or when we step out in our neighborhoods.”

Operation Legend has already produced results. One of the most heartening developments was the arrest of a suspect in the murder of LeGend Taliferro on August 13.

Within the first 30 days, efforts in Kansas City resulted in more than 200 arrests, according to U.S. Attorney Tim Garrison. Among those apprehended were suspects in homicides, assaults, robberies, and drug trafficking.

Shivers said that since mid-July, the FBI has opened 111 new cases, made 116 arrests, and recovered 92 firearms across the Operation Legend cities.

“What we want to do,” Shivers said, “is have a significantly positive impact on an entire community that’s being affected by violent crime.”

Operation Legend is a coordinated initiative across law enforcement to address a recent surge in violent crime, especially gun violence.
If you have any information on these cases, please contact the FBI at tips.fbi.gov or 1-800-CALL-FBI. Tips can be submitted anonymously. 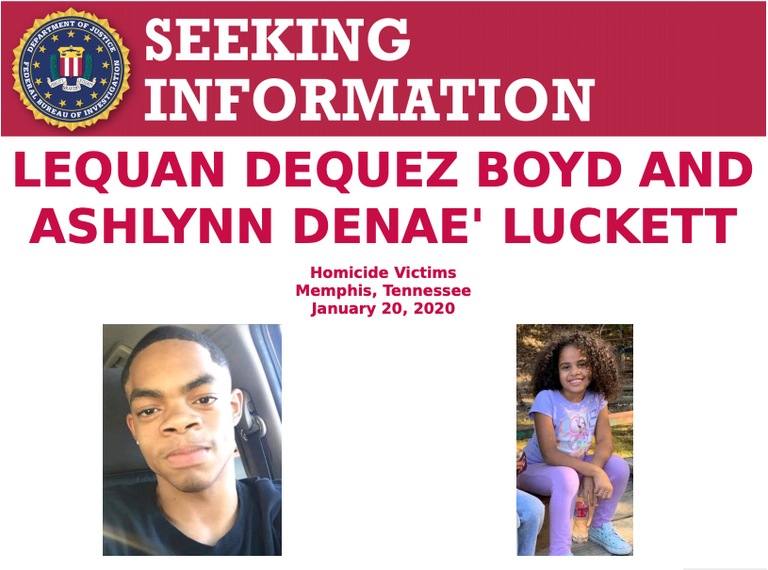 When responding to reports of a shooting on January 20, 2020, Memphis police officers found six-year-old Ashlynn Denae' Luckett and sixteen-year-old LeQuan Dequez Boyd had been struck by gunfire while they were inside their home. Both died as a result of their injuries. 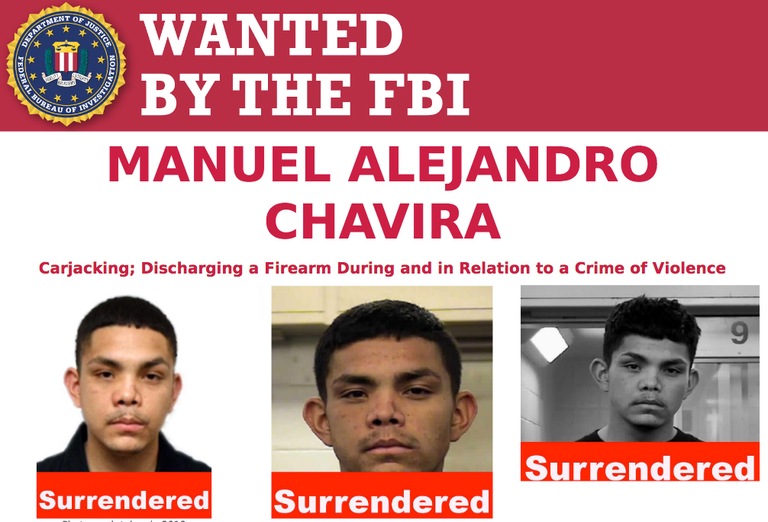 Manuel Alejandro Chavira, a convicted felon, is wanted for his alleged involvement in a carjacking that occurred on July 18, 2020, in Albuquerque, New Mexico. 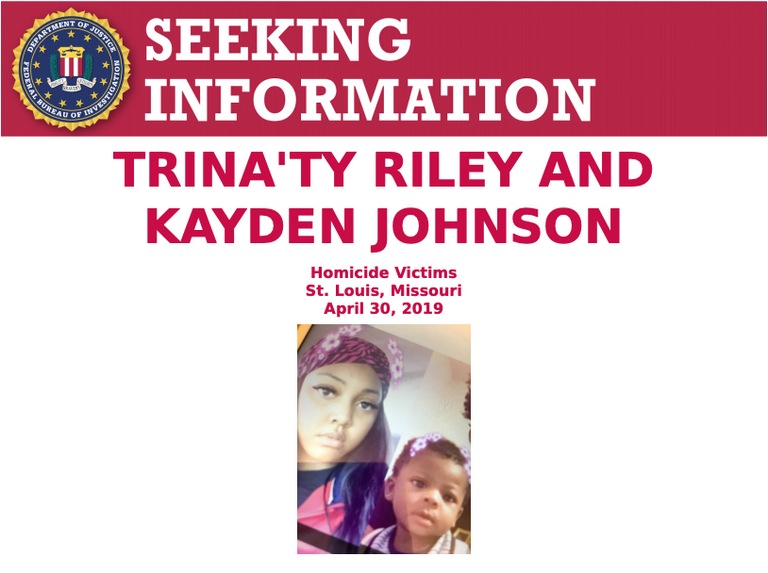 On April 30, 2019, officers with the St. Louis Metropolitan Police Department were dispatched to a shooting at a residence in St. Louis, Missouri. When police arrived on scene, they found 18-year-old Trina'ty Riley and her 2-year-old son, Kayden Johnson, were fatally shot inside their own home. 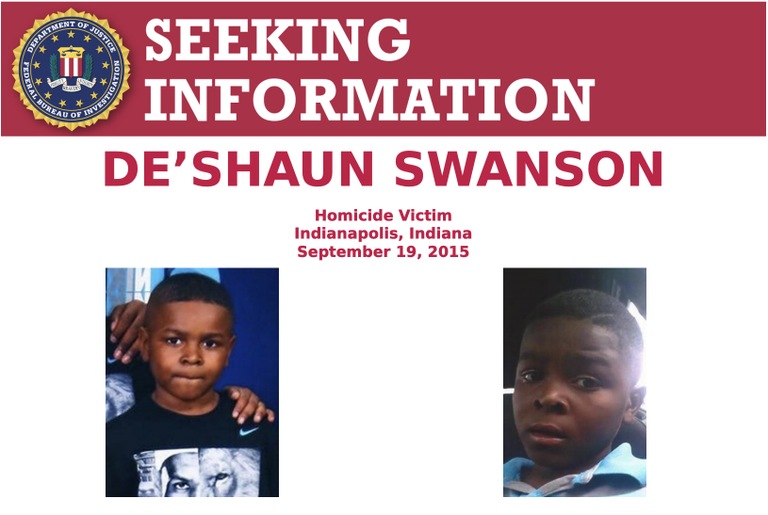 On September 19, 2015, around 8:30 p.m., De'Shaun Swanson and his family attended a memorial service at a home in the 3900 block of Graceland Avenue, located in the Butler Tarkington neighborhood in Indianapolis, Indiana. Upon De’Shaun and his family’s arrival at the home, someone opened fire in a drive-by shooting. De'Shaun was one of four people shot. De'Shaun was rushed to an area hospital but did not survive. 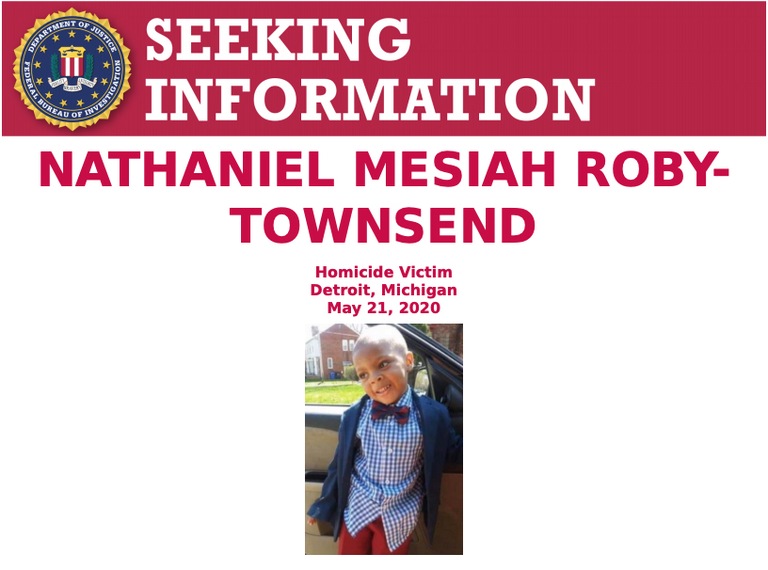 Nathaniel Mesiah Roby-Townsend who was four years old at the time of his death, was shot when two unknown individuals armed with rifles opened fire on the residence located at 18611 Birwood Street in Detroit, Michigan, at approximately 12:50 am on May 21, 2020. One round struck Nathaniel in the chest, killing him instantly. 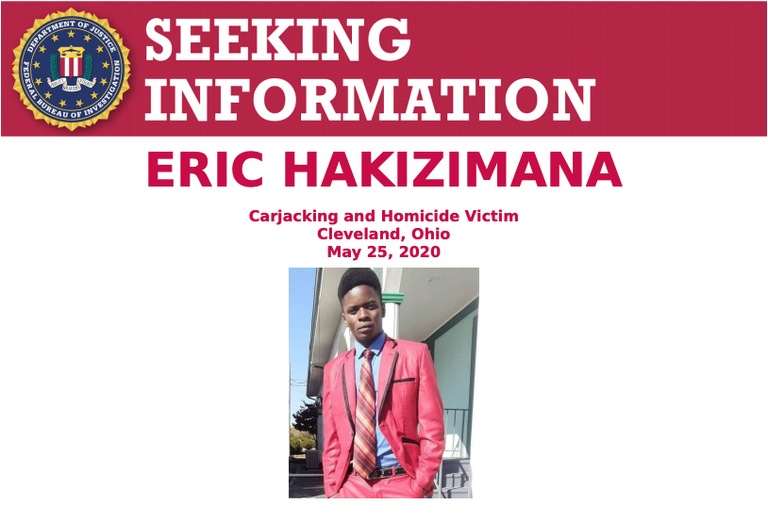 Eric Hakizimana, who was 17 years old at the time of his death, was returning from soccer practice when he was pulled from his vehicle at gunpoint while stopped at a light at West 80th Street and Detroit Avenue in Cleveland, Ohio, by an unidentified male. He was subsequently killed by the same unidentified male, who may have also been involved in the shooting death of another man several blocks away.. 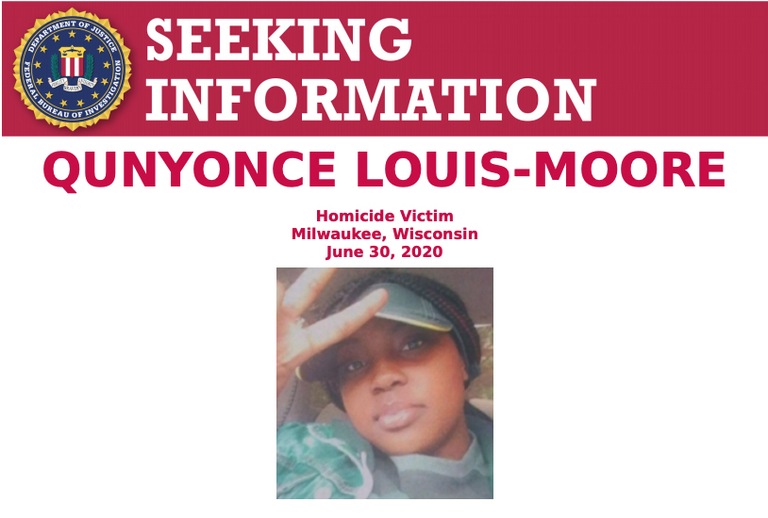 Qunyonce Louis-Moore, who was 16 years old at the time of her death, was shot when unknown individuals opened fire on the 3400 block of North 8th Street in Milwaukee, Wisconsin, on June 30, 2020, at approximately 10:28 p.m. Louis-Moore was on a walk with friends when she was struck by gunfire. She died at the scene. 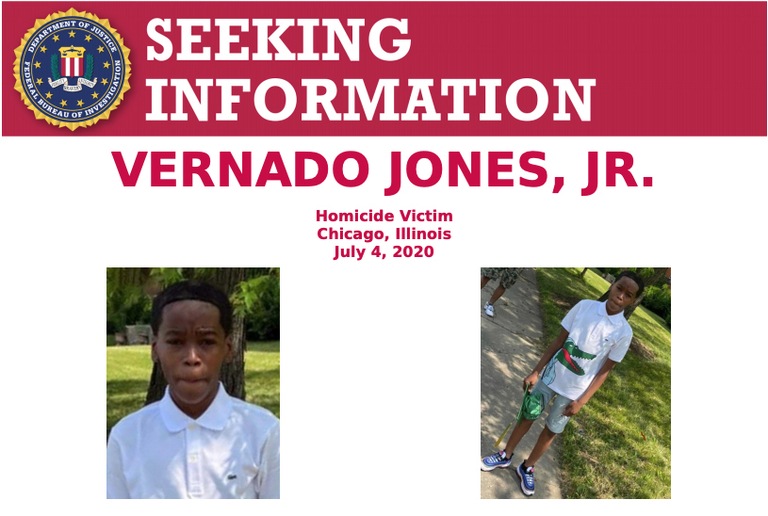 Vernado Jones, Jr., who was 14 years old at the time of his death, was shot when unknown individuals opened fire on a gathering in the Englewood neighborhood of Chicago, Illinois, after 11:30 p.m. on July 4, 2020. A total of eight people were shot - including two other children. Jones was one of four fatalities. 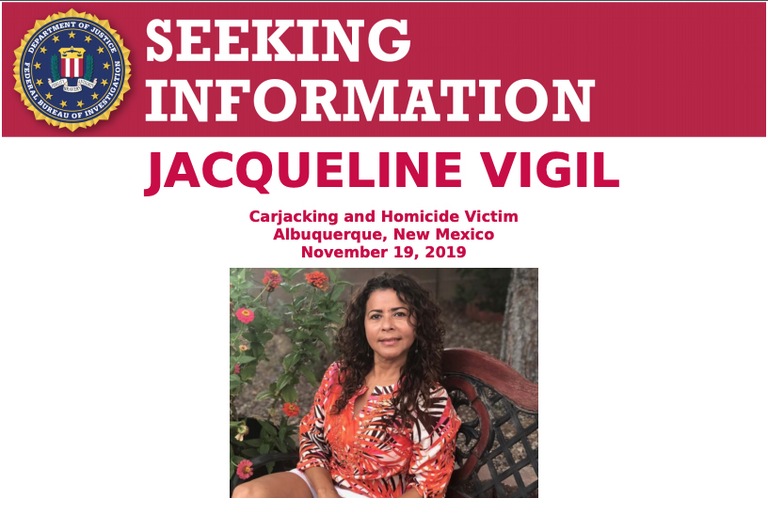 Jacqueline Vigil, who was 55 years old at the time of her death, was the mother of two New Mexico State Police Officers. She was fatally shot in her driveway while in her 2006 Cadillac sedan on November 19, 2019. Eight days later, police located and recovered a Jeep they believe was involved in the homicide. 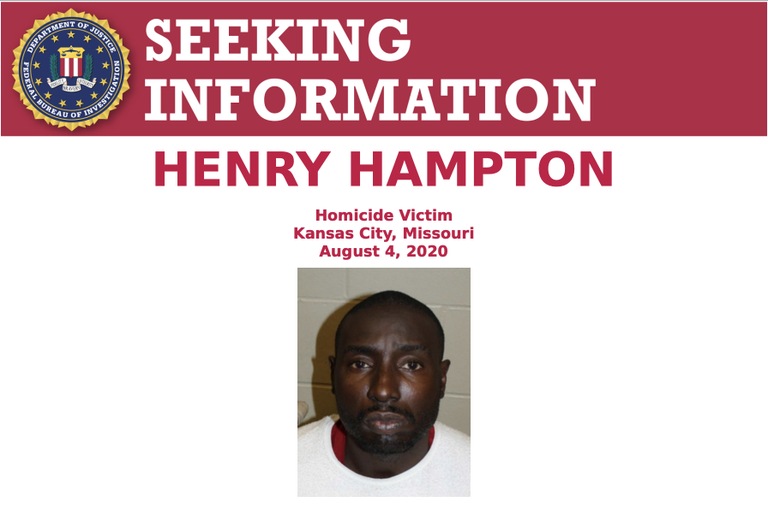 On August 4, 2020, the Kansas City Police Department responded to the Alcazar Apartments at 105 West 39th Street in Kansas City, Missouri, for a homicide call. Upon arrival, the body of Henry Hampton, age 34, was located on the stairwell of the apartment complex. Hampton had been shot in the head. 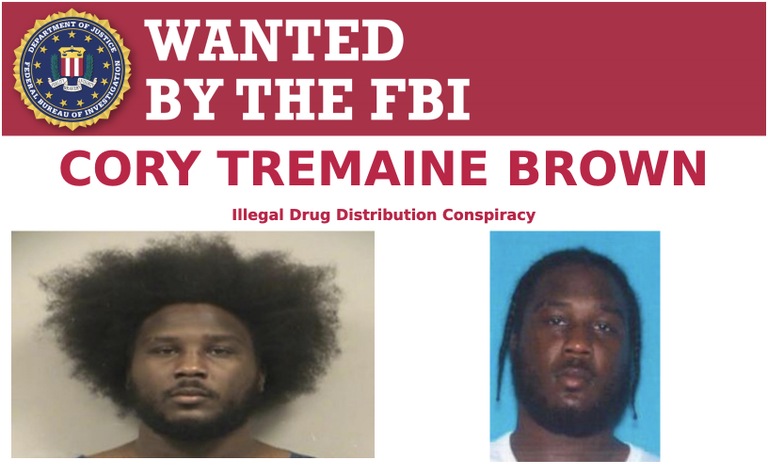 Cory Brown is wanted for his alleged involvement with a drug-trafficking conspiracy in Kansas City, Missouri, from January 1, 2011, to October 1, 2019. Brown allegedly participated in a conspiracy to distribute at least a kilogram of heroin, as well as cocaine, crack cocaine, oxycodone, codeine, and marijuana. 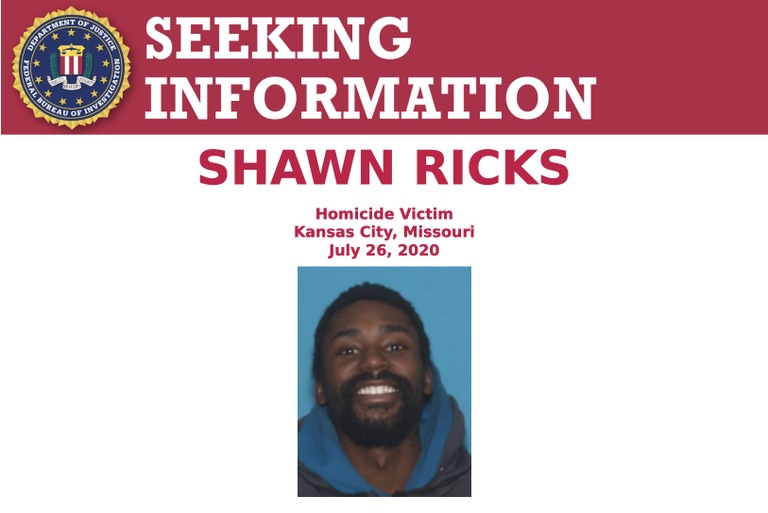 On July 26, 2020, the Kansas City Police Department responded to a reported homicide on the 3400th block of Indiana Street in Kansas City, Missouri. Upon arrival, officers identified the victim, Shawn Ricks, who was deceased in the street.

After a 6-year-old boy with autism went missing in North Carolina in 2018, the FBI’s Child Abduction Rapid Deployment Team developed a one-page questionnaire to help investigators be better prepared in similar cases.

Although the annual in-person DCLA ceremony at FBI Headquarters was canceled this year, we honor and celebrate the dedication and service of each of our award recipients, who are all working to make their communities safer and stronger.