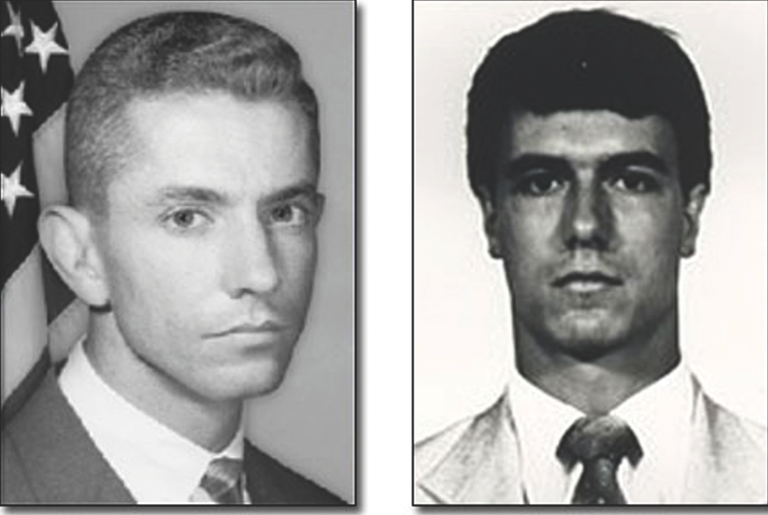 On the morning of April 11, 1986—25 years ago today—one of the deadliest and most violent shoot-outs in FBI history unfolded just outside of the city of Miami.

FBI agents were leading a massive manhunt for two violent bank robbers—later identified as Michael Lee Platt and William Russell Matix—who were known for using high-caliber firearms and stolen cars. They had murdered several people since the previous October, and Miami police and the FBI were closing in on them. 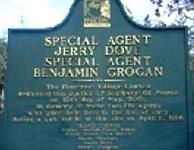 (Left: A placard in Miami honors Special Agents Jerry Dove and Benjamin Grogan.) Miami Special Agents Benjamin Grogan and Jerry Dove—two of the eight agents ultimately directly involved in the firefight (see sidebar below) who were riding together in one of the five pursuing Bureau cars—noticed a stolen, black Monte Carlo connected to the two robbers and began following it.

Also in close pursuit and riding alone, Special Agent Richard Manauzzi tried to steer the Monte Carlo into a tree at the side of 12201 SW 82nd Avenue when he noticed one of the criminals aiming a weapon toward pursuing FBI agents. Three Bureau cars collided with the suspects and forced them off the road, but the felons opened fire.

The events unfolded quickly and horrifically. Special Agent Manauzzi was seriously wounded and immediately sought cover. Special Agent Gordon McNeill—also riding alone—was wounded, but returned fire, striking Matix. Special Agents Gilbert Orrantia and Ronald Risner were pinned in their vehicle on the other side of the street; Orrantia was wounded. Special Agents Edmundo Mireles and John Hanlon had also stopped their car on the opposite side of the street and came under high-powered rifle fire as they tried to approach the felons. Both were seriously wounded. Special Agents Dove and Grogan—despite wounding both criminals in the hail of bullets—were trapped in their car and killed when Platt fired at close range. Platt also shot and incapacitated Agent Hanlon.

Severely wounded and struggling to remain conscious, Special Agent Mireles stood up and began firing at the criminals as they entered and tried to escape in Dove and Grogan’s car. He killed both men even as they returned fire.

In the end, the FBI’s casualties were higher than any shoot-out in its history: two dead, three seriously wounded, and two others injured. Only Agent Risner was unhurt.

In the aftermath of the gun battle, the FBI and other law enforcement agencies closely studied the incident. Although wounded, both Platt and Matix were able to continue firing their weapons at the surrounding agents. Our guns had not stopped them. Furthermore, the killers’ weapons were more powerful and their rounds could penetrate even the armored vests that some of the agents were wearing.

In response to this tragedy, the FBI made significant changes in the firepower carried by agents, the body armor they wore, and the incident response training they received.

Today, we honor not just Agents Dove and Grogan—and their colleagues injured that day—but all of the men and women of the FBI who have given their lives in the line of duty and put themselves in harm’s way to protect their communities. As Director Mueller said in a ceremony in Miami attended by former FBI Director William Webster, survivors of the shooting, and many others:

“It has been said that all great things are simple, and most can be expressed in a single word: fidelity, bravery, and integrity. Honor, duty, and sacrifice. But it is no simple matter to act on such words when every second counts and life hangs in the balance. The individuals we honor today embodied the true meaning of these words and what it means to be a special agent.”

Inside the role of intelligence analysts who brief the Director on threats to the U.S.