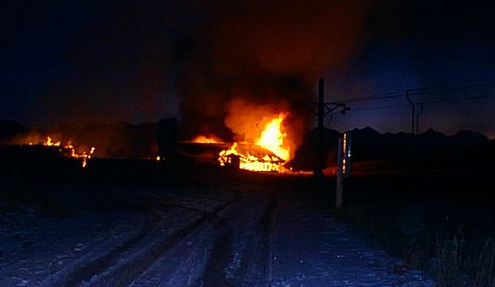 The 1998 arson at a Vail, Colorado ski resort caused more than $24 million in damages.

The 39-year-old alleged member of the domestic terrorist cell called “The Family” will face federal arson charges for her role in the largest eco-terrorism case in U.S. history, known as Operation Backfire. With Rubin in custody, only two members of The Family remain at large.

Along with a dozen other conspirators, Rubin is charged with multiple crimes from 1996 through 2001 in the West and Pacific Northwest, including in Oregon, Colorado, and California. The Family committed an estimated $48 million worth of arson and vandalism under the names of the Animal Liberation Front and the Earth Liberation Front.

The cell’s most notorious crime was the 1998 arson of a Vail, Colorado ski resort that caused more than $24 million in damages and drew international attention to eco-terrorists—those who break the law in the misguided attempt to protect the environment and animal rights. The FBI took the lead in the Vail investigation, working closely with local, state, and federal law enforcement partners, and in 2004, multiple eco-terrorism investigations were condensed into Operation Backfire.

In July 2011, one of Rubin’s conspirators, Justin Solondz, was turned over to U.S. authorities by the Chinese government. Solondz had been imprisoned in China on drug charges. That leaves two Operation Backfire fugitives still at large, and there is a reward for information leading to their arrest.

“Two years ago we had four fugitives. Now we have two—so we are halfway there,” said Special Agent Tim Suttles, who works in our Portland Division and has been investigating the eco-terrorist group since 2005.

Although Suttles said it is “very satisfying” to see Rubin surrender and submit herself to the judicial process, the Operation Backfire investigation will not be closed until the last two fugitives—Joseph Dibee and Josephine Overaker—are in custody. 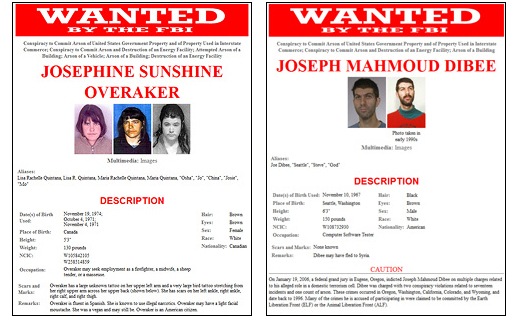 We need your help to locate these two individuals. A reward of up to $50,000 each is being offered for information leading to the arrest of Dibee and Overaker, both of whom are believed to be living abroad.

Here is what we know about the two:

Suttles believes Rubin may have surrendered because she was tired of life on the run. “She may have realized that being a fugitive meant she could never go home or could never have contact with her mom, who she is very close to.” Like many long-term fugitives, he added, “she may have come to the realization that coming in, admitting what you did, and taking your punishment will allow you to move on with your life.”

To date, Operation Backfire investigators have solved more than 40 criminal acts ranging from vandalism to arson. Seventeen individuals have been indicted, 15 of whom pled guilty and were sentenced in 2007 to jail time ranging from more than three years to 15 years.