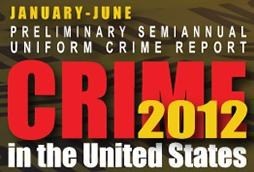 According to statistics from our Preliminary Semiannual Uniform Crime Report, January-June 2012, the number of violent crimes reported by law enforcement for the first six months of 2012 increased 1.9 percent over figures from the same period in 2011. Property crimes also rose 1.5 percent overall.

Violent Crime. Two of the four offenses in the violent crime category actually showed overall decreases when compared with data from the first six months of 2011—murders dropped 1.7 percent and forcible rapes fell 1.4 percent. But the number of robberies increased 2.0 percent and aggravated assaults 2.3 percent. 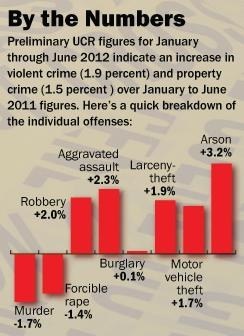 Regionally, the West saw the largest rise in property crime—up 4.7 percent, followed closely by the Northeast at 4.0 percent. The Midwest was up 1.3 percent, but the South actually showed a decrease of 1.4 percent.

The statistics for arson, collected separately from other property crimes because of varying degrees of reporting among law enforcement agencies, showed an overall jump of 3.2 percent during the first six months of 2012. Three of the four regions of the country reported increases—up 11.0 percent in the Midwest, 6.4 percent in the West, and 5.7 percent in the Northeast. The South saw a 5.6 decrease in arson offenses.

Preliminary crime stats for the full year—contained in UCR’s Preliminary Annual Uniform Crime Report, January-December 2012—should be available in six months, and final figures are scheduled to be released by the end of the year.

A 2006 “hitman” case illustrates the FBI’s continued investigative role since the 1930s.