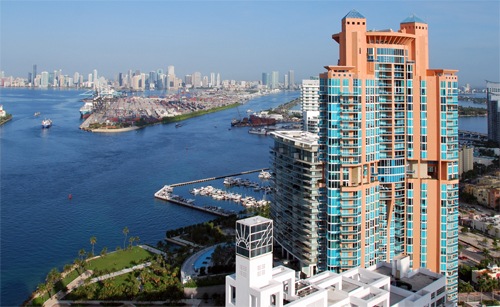 The view from one of drug kingpin Alvaro Lopez Tardón’s Miami condominium units, which overlooks another unit he owned in a nearby high-rise.

For years, Alvaro Lopez Tardón, a Spanish national, was living the high life in Miami—fancy cars, seaside condos, designer jewelry, and expensive leather goods. But it all came crashing down in the summer of 2011 when he was named in a U.S. federal money laundering indictment as the head of an international narcotics trafficking enterprise. His illicit enterprise was believed responsible for distributing more than 7,500 kilos of South American cocaine in Spain and laundering more than $14 million in illegal drug proceeds in the United States.

Last fall, after being tried and convicted on numerous money laundering charges, Tardón was sentenced to an astonishing 150 years—exchanging his spacious South Beach penthouse for a small federal prison cell where he will spend the rest of his life. And in addition to the sentence, a $14 million money judgment and a $2 million fine were entered against him, and his assets are in the process of being forfeited

Tardón made his initial mark in the drug trade back in the 1990s, when he—along with his brother Artemio—worked for a ruthless drug trafficker in Spain. By the early 2000s, the Tardón brothers began a bloody feud with their boss and set about building their own criminal enterprise. They were ultimately successful—Alvardo directed the enterprise’s illegal activities primarily from Miami, where he visited often, and second-in-command Artemio ran things from Madrid.

Here’s how the money laundering scheme generally worked: the Tardóns’ enterprise imported large quantities of Colombian cocaine from Peru into Spain. The illegal proceeds from the distribution and sale of the drugs would then be sent into the U.S., either carried by couriers or wire-transferred into any one of the numerous bank accounts Alvaro Tardón had set up (often not in his own name). He and his associates—usually through straw buyers or shell companies—would then launder the money through their purchases of luxury vehicles and high-end real estate in the Miami area.

By early 2011, though, the noose began to tighten around the Tardón organization. Spanish police raided a cocaine lab near Madrid run by a woman who distributed cocaine for the brothers. (Found at the lab were ledgers that matched ledgers later found in Alvaro’s Miami penthouse.) By July 2011, law enforcement in both countries had enough evidence to charge and arrest 20 members of the criminal group—16 individuals, including Artemio, in Madrid, and four, including Alvaro, in Miami.

Successfully investigating the activities of an international criminal organization requires the collaboration of law enforcement agencies at all levels, and that’s exactly what happened in this case. From the very beginning of the investigation in 2010—when the Spanish National Police shared information about Alvaro and Artemio Tardón with the FBI through our Madrid Legal Attaché—Bureau investigators worked side by side with our partners internationally, with other U.S. federal agencies, and with local authorities in Florida.

An essential part of our money laundering case against Alvaro Tardón was an in-depth analysis of U.S. financial, real estate, and tax records as well as additional records shared with us by Spanish authorities. And Tardón’s seven-week trial included the introduction of more than 36,000 pages of documents from Spain and the United States. Jurors also heard testimony from representatives of the Spanish National Police as well as Spain’s national wiretapping agency and its taxing agency.

In the end, it was enough to convince a jury to convict Tardón and, according to Miami Special Agent in Charge George Piro, to ensure that “Alvaro Lopez Tardón’s days as an international drug kingpin were over.”

Somali-born Liban Haji Mohamed is the latest addition to the list.