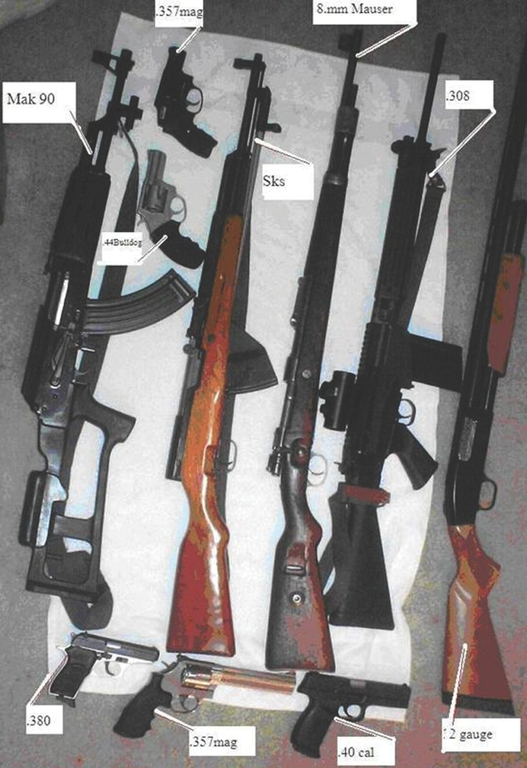 A cache of guns seized from militia extremists.

Last March, nine members of an extremist militia group were charged in Michigan with seditious conspiracy and attempted use of weapons of mass destruction in connection with an alleged plot to attack law enforcement and spark an uprising against the government.

According to the federal indictment, the nine individuals planned to kill a law enforcement officer and then use bombs to attack the caravan of cars taking part in the subsequent funeral procession, hoping that this violence would incite a larger armed conflict with authorities. Fortunately, the FBI and the Michigan State Police intervened and took the subjects into custody before they could carry out their alleged plot.

It’s just one example of the dangers posed by so-called militia extremists—the latest topic in our series to educate the nation on domestic terror threats that the FBI investigates today. Previous stories have focused on anarchist extremists, eco-terrorists/animal rights extremists, lone offenders, and sovereign citizen extremists.

Who they are. Like many domestic terrorism groups, militia extremists are anti-government. What sets them apart is that they’re often organized into paramilitary groups that follow a military-style rank hierarchy. They tend to stockpile illegal weapons and ammunition, trying illegally to get their hands on fully automatic firearms or attempting to convert weapons to fully automatic. They also try to buy or manufacture improvised explosive devices and typically engage in wilderness, survival, or other paramilitary training.

Who and what they target. They usually go after the government itself—including law enforcement personnel, representatives of the courts, and other public officials, along with government buildings. When caught, most militia extremists are charged with weapons, explosives, and/or conspiracy violations.

What they believe in. Many militia extremists view themselves as protecting the U.S. Constitution, other U.S. laws, or their own individual liberties. They believe that the Constitution grants citizens the power to take back the federal government by force or violence if they feel it’s necessary. They oppose gun control efforts and fear the widespread disarming of Americans by the federal government.

Militia extremists often subscribe to various conspiracy theories regarding government. One of their primary theories is that the United Nations—which they refer to as the New World Order, or NWO—has the right to use its military forces anywhere in the world (it doesn’t, of course). The extremists often train and prepare for what they foresee as an inevitable invasion of the U.S. by United Nations forces. Many militia extremists also wrongly believe that the federal government will relocate citizens to camps controlled by the Federal Emergency Management Agency, or force them to undergo vaccinations.

One important note: simply espousing anti-government rhetoric is not against the law. However, seeking to advance that ideology through force or violence is illegal, and that’s when the FBI and law enforcement become involved.

What is the FBI doing to combat the militia extremism threat? In addition to our lawful use of sophisticated investigative techniques, we’ve expanded our work with other federal agencies such as the Bureau of Alcohol, Tobacco, Firearms, and Explosives and with our state and local partners. And we use intelligence and analysis to help identify gaps in our knowledge, emerging tactics and trends, and effective investigative strategies.

As always, the combination of intelligence, coordinated law enforcement efforts, and an informed public is the most effective way to counter the threats posed by domestic extremists.

Illegal Use of Laser Pointers a Serious Crime

A St. Louis man's arrest for pointing a laser at aircraft reveals dangers to flight crews.