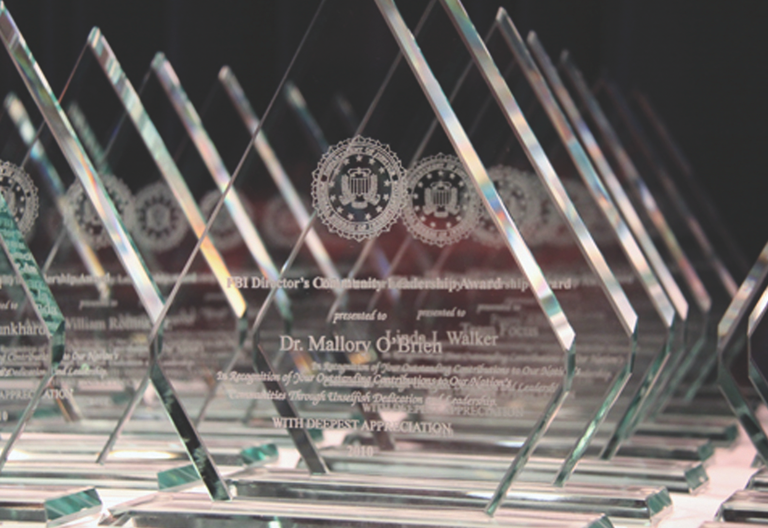 They come from different parts of the country. They work in many different fields. And they serve a variety of constituencies.

But the 50-plus individuals who gathered at FBI Headquarters in Washington, D.C., today for a special ceremony have one thing in common: they are all recipients of the 2010 Director’s Community Leadership Award (DCLA) for their selfless actions within their communities. And, according to Director Robert Mueller, the recipients share “a willingness to lead and a commitment to improve the lives of their neighbors.... They embody the true meaning of citizenship.”

This year’s recipients show how ordinary citizens can make such a big difference in the lives of others, from the New Mexico Anti-Defamation League regional director who combats prejudice and discrimination…to the mosque board member in Cincinnati who educates law enforcement and community leaders about the Muslim faith…from the New Jersey child advocate dedicated to protecting kids from online sexual predators…to the Seattle television anchor whose news program highlights and helps apprehend dangerous fugitives.

And those who benefit from their involvement also represent a broad spectrum of the community, including the young, the elderly, the disabled, women and girls, refugees and legal immigrants, crime victims, minority groups, law enforcement, and the general public.

We present each of these awards publicly—first at the local FBI field office and then at a national ceremony in Washington—with the hopes that others will hear the stories of the recipients and be inspired to create change in their own communities, working to keep their neighborhoods safer.

Here are a few more examples of the individuals and organizations selected to receive the DCLA:

Every year, FBI field offices select individuals or organizations—one per office—to receive the DCLA. The criteria for the award? Achievements in combating terrorism, cyber crime, and illegal drugs, gangs, and other crimes; or violence prevention/education efforts that have had a tremendous positive impact on their communities. This year’s crop of award recipients joins the ranks of a dedicated group of people and organizations that, since 1990, have collectively enhanced the lives of thousands of individuals and families and helped protect communities around the United States.

Congratulations to the winners!

Your help unlocking the mystery of two encrypted notes could solve a 1999 murder.