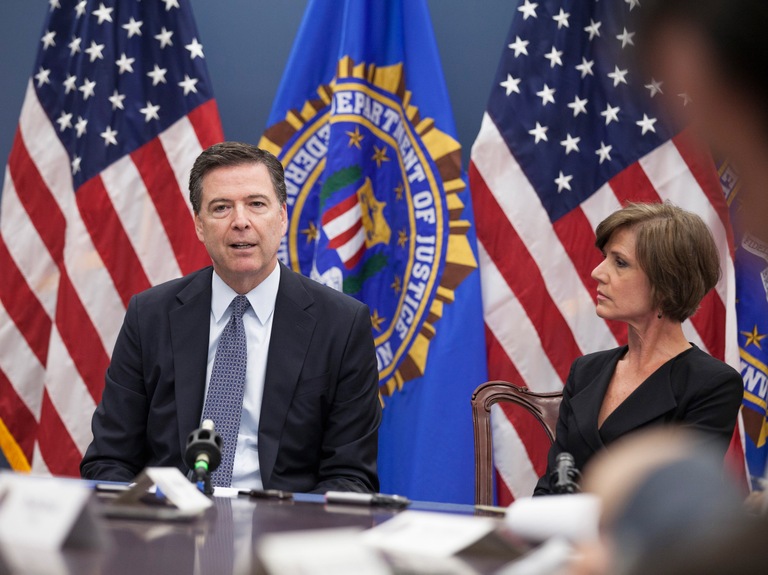 FBI Director James Comey—joined by Deputy Attorney General Sally Yates—addresses members of the media during a press briefing held June 13, 2016 at FBI Headquarters regarding the recent mass shooting at nightclub in Orlando, Florida.

In a televised news briefing at FBI Headquarters, Comey said FBI investigators—working closely with state and local law enforcement agencies—are trying to understand “every moment of the killer’s path” leading up to the shooting early Sunday morning at a popular nightclub.

Comey said the shooter, who was killed in a gunfight with police responders, made three 911 phone calls from the club during the attack, beginning at about 2:30 a.m. In the calls, he claimed allegiance to the leader of the so-called Islamic State (ISIL) as well as the perpetrators of the 2013 Boston Marathon attack and a Florida man who died as a suicide bomber in Syria for a terrorist group in conflict with ISIL.

“There are strong indications of radicalization by this killer and of potential inspiration by foreign terrorism organizations,” Comey said, adding that the FBI is the lead investigative agency on this case because it is a terrorism investigation.

Director Comey also described the FBI’s prior contacts with the killer, beginning in May 2013. The FBI opened an investigation when the shooter, then working as a contract security guard, made some inflammatory comments to co-workers and claimed a family connection to al Qaeda. The shooter was interviewed twice during the preliminary investigation, where he admitted making the statements but said he had done so in anger at his co-workers, who he believed were discriminating against him. The case was closed after 10 months.

Two months later, the shooter’s name surfaced as a casual acquaintance of the Florida man who blew himself up in Syria for the terrorist group al Nusra Front. “Our investigation turned up no ties of any consequence between the two of them,” Comey said. “We will continue to look forward in this investigation, and backward. We will leave no stone unturned.”

The Director, who was joined at the press briefing by Deputy Attorney General Sally Yates, expressed sorrow for the victims and their families.

“Our hearts are broken and ache for the people who are lost in Orlando, those wounded, and their families,” he said.

Comey also thanked first responders for their heroic work. “They showed professionalism and extraordinary bravery that saved lives,” he said. “We are very lucky that such good people choose lives of service in law enforcement.”

Law enforcement authorities have announced the arrest of a 72-year-old California man believed to be the East Area Rapist/Golden State Killer.