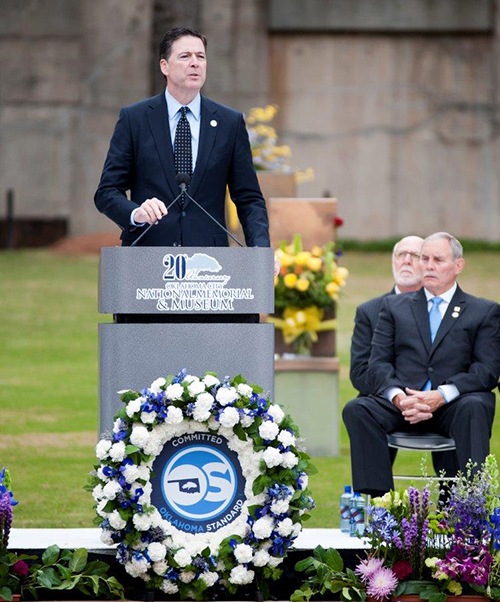 Director Comey speaks at a memorial service marking the 20th anniversary of the bombing.

Speaking this morning at a remembrance ceremony marking the 20th anniversary of the Alfred P. Murrah Federal Building bombing in Oklahoma City, FBI Director James Comey noted that as the nation looked on in shock at the senseless act of homegrown terrorism on April 19, 1995, it also witnessed Oklahomans responding with tremendous unity and resolve.

The ceremony was held at the Oklahoma City National Memorial & Museum in Oklahoma City and attended by survivors, families of victims, first responders, and dignitaries, including former President Bill Clinton. Comey applauded the outpouring of generosity and spirit by the state’s residents after the bombing, which became known as the Oklahoma Standard.

“We’ve had these dark and damaging moments before, as individuals, as Americans, and as citizens of the world,” Comey said, speaking of the attack on the Murrah building that killed 168 people. “But it is not the moment that defines us. It is not the act itself that shapes our destiny. It is what comes next.”