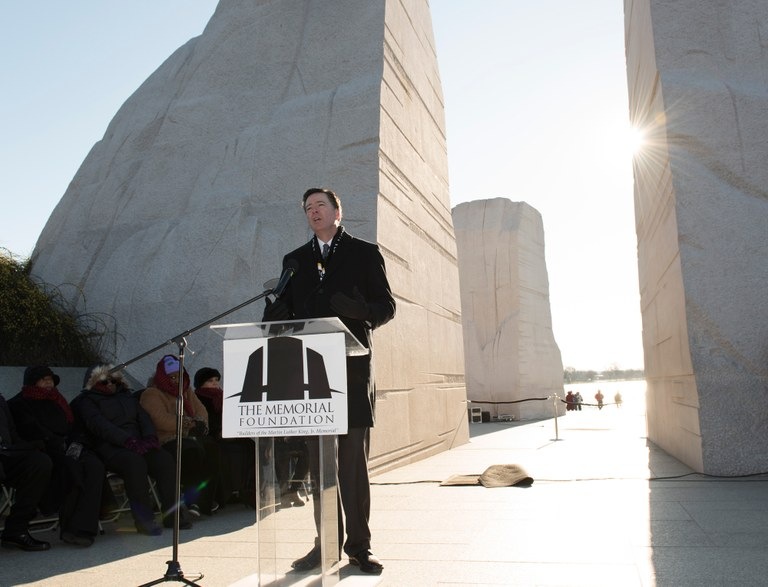 Director Comey speaks during a ceremony at the Martin Luther King, Jr. Memorial in Washington, D.C. on January 18, 2016.

With the 30-foot statue of the iconic leader as his backdrop, Comey provided remarks during a wreath-laying ceremony sponsored by The Memorial Foundation. Comey began his speech by highlighting the memorial as an important aspect of the training provided by the FBI Academy.

“Special agents and intelligence analysts now visit the memorial during their training, where they study Dr. King as part of their curriculum,” Comey said to ceremony attendees. “It serves as an example of constraint and oversight in the history of the FBI and Dr. King.”

The Director also took the opportunity in his speech to reference a current divide between police agencies and the communities they assist, particularly communities of color.

“I imagine two lines—one is law enforcement and the other is the communities we serve and protect,” Comey said. “Those lines are never together, and I feel them arcing apart in American life.”

One way to develop closer ties, Comey suggests, is for law enforcement personnel and communities to develop deeper consideration for one another.

“We have to understand that all of us—law enforcement and non-law enforcement—carry with us an implicit bias,” he said. “We react differently to a face that looks different than our own. We have to stare at that and own that.”

After speaking, Comey joined the ceremony procession in laying a wreath at the foot of King’s statue, which features text from the famed 1963 "I Have a Dream" speech.

“If Dr. King were alive today, he would tell us we have to get closer to each other, to open our hearts and our minds to see each other clearly,” Comey said as he closed his remarks.

The FBI is part of a new strategy to combat intellectual property crimes.