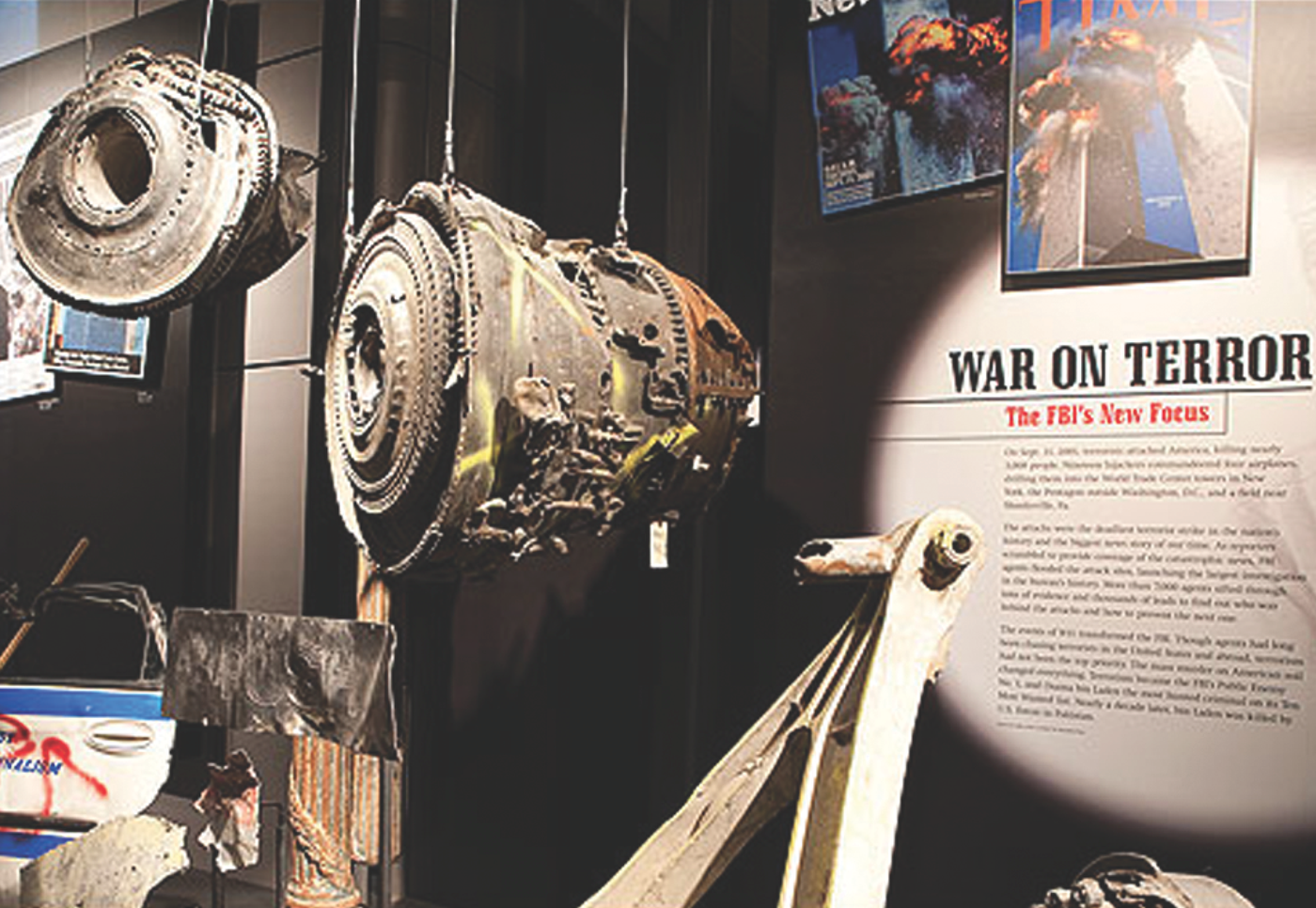 The installment is part of the Newseum’s larger exhibit “G-Men and Journalists: Top News Stories of the FBI’s First Century.” Photos and video courtesy of the Newseum.

The FBI’s fight against terrorism—our top priority since 9/11—is the subject of a new addition to a popular museum exhibit in the nation’s capital.

“War on Terror: The FBI’s New Focus,” opened last month at the Newseum, a museum devoted to the news and journalism. The new installment, part of the larger exhibit “G-Men and Journalists: Top News Stories of the FBI’s First Century,” contains 60 artifacts from the 9/11 investigation and other well-known terror plots.

“G-Men and Journalists,” which opened in 2008 and has drawn more than two million visitors, “has been one of our most popular exhibits,” said Cathy Trost, the Newseum’s director of exhibit development. “But we realized we also needed to tell the story of the Bureau’s fight against terrorism, which has really defined the modern FBI.”

Some of the artifacts on display are small and deeply personal, such as the pocketbook of Ruth McCourt, which contained credit cards and a snapshot of Ruth and her 4-year-old daughter, who were on their way to Disneyland when their plane—Flight 175—hit the World Trade Center on 9/11. Our Evidence Response Teams recovered thousands of these types of personal items, and our Office for Victim Assistance later returned many of them to family members.

Also on display is a collection of damaged cell phones and pagers recovered from the World Trade Center rubble. For days after the attack, as first responders and law enforcement teams searched for survivors and evidence, these buried devices rang and rang as victims’ families and loved ones desperately tried to make a connection.

Other artifacts are large, chilling reminders of the 9/11 attack’s deadly destruction, including two pieces of the airplane engines—one weighing some 1,500 pounds—that crashed into the World Trade Center towers and were recovered blocks from Ground Zero.

The exhibit also features other investigations besides the 9/11 attack, including the case of shoe bomber Richard Reid. Trained by al Qaeda, Reid tried to blow up a flight from Paris to Miami in December 2001 using explosives hidden in his hiking boots. The actual shoes are on display—along with a collection of belts used by passengers to subdue him until the flight landed and he was taken into custody.

“People are moved by the power of these artifacts,” Trost said. The “War on Terror” exhibit, like “G-Men and Journalists,” was the result of a collaboration between the Newseum and the FBI—just one of the many ways our Office of Public Affairs tries to inform the public about the Bureau, its history, its people, and its mission.

“The ability to see these real pieces of history from some of our most important cases helps the public understand the Bureau’s mission and how critical it is to the nation’s security,” said Mike Kortan, FBI assistant director of public affairs. Kortan noted that the FBI is also featured at the National Museum of Crime & Punishment and the International Spy Museum and will be represented at the National Law Enforcement Museum—all located near FBI Headquarters in Washington. The Bureau is also working with the Ground Zero Museum in New York, he said.

For more information about the new “War on Terror” exhibit at the Newseum, visit its website.

Resources:
- More on the “G-Men and Journalists” exhibit

How a police detective and a fingerprint examiner in Texas solved a 1969 murder case.