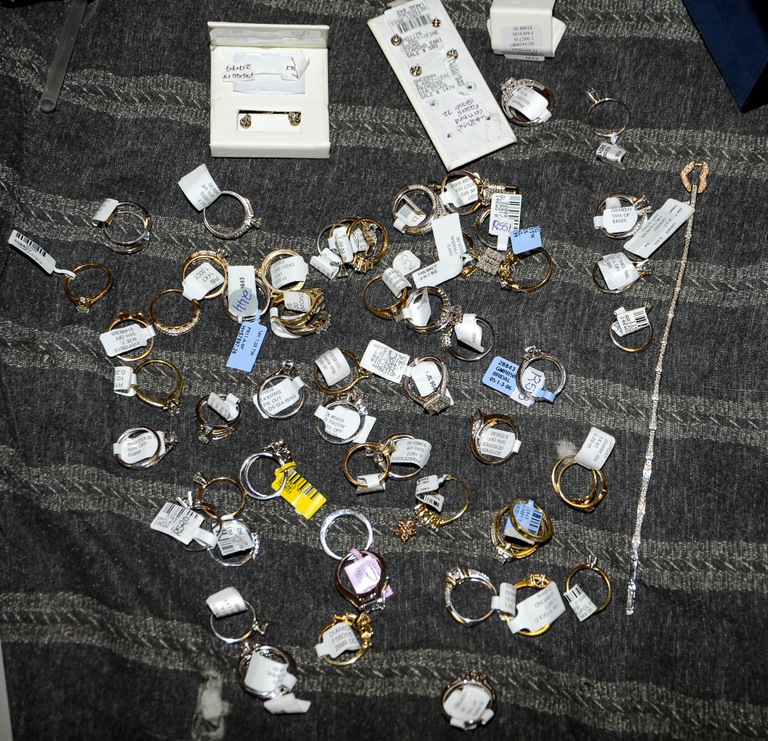 This stolen jewelry from several armed robberies—much of it with price tags still on—was found in the Texas residence of Mark D. Whitfield, who, along with Michael Demon Jackson, was later convicted of the crimes.

Two Texas men who committed violent jewelry store robberies in the Dallas/Fort Worth area were recently sentenced to lengthy prison terms thanks to an FBI-led task force that helped bring them to justice. The case is a classic example of local and federal law enforcement officers working together to make their communities safer.

For a seven-month period between 2013 and 2014, Michael Demon Jackson and Mark D. Whitfield robbed numerous jewelry stores at gunpoint, in part to feed their heroin habits. Last May, after pleading guilty to the crimes, Jackson was sentenced to 594 months in federal prison, just shy of 50 years. In June, Whitfield received a 309-month prison term.

“Jackson had a previous murder conviction, and the judge took that into consideration,” said FBI Special Agent Gil Balli, who supervises the Dallas Violent Crimes Task Force that investigated the case. The fact that both men were charged federally resulted in stiffer sentences and no chance of parole.

“Being able to bring federal charges in violent criminal cases is one of the strengths of the task force,” Balli said. Established two years ago, the task force consists of FBI agents and officers from the Dallas Police Department and other local police departments from Garland and Carrollton, Texas. When necessary, the task force partners with other state and federal agencies.

“Our mission,” Balli said, “is to target criminal groups and individuals, including fugitives, who commit the worst violent crimes in our area.”

Balli receives daily updates about robberies that have occurred in the Dallas/Fort Worth area in the previous 24 hours. He consults with Dallas Police Department officials and other task force members about which crimes might rise to the level of task force involvement. “We all exchange intelligence on a daily basis,” he said, adding, “We are looking at the most violent offenders in our communities, who often commit serial robberies.”

Jackson and Whitfield fit that description. The pair targeted jewelry stores in shopping malls without good security and where female sales clerks worked alone. Whitfield would enter the store pretending to be a customer interested in making a purchase. When the clerk opened the display case, Jackson came in brandishing a gun.

“He would push the clerks to the ground, put the gun to the back of their heads, and threaten to kill them,” said Noe Camacho, a Dallas Police Department detective on the task force. “It was very traumatic for the victims.”

After several robberies, investigators had surveillance video from inside the stores, and not much else. But during an April 2014 robbery in Lewisville, Texas, a person saw two men running out of the mall and took a picture of the car they drove away in—a red Mitsubishi Galant. The license plate was not visible, but investigators noticed that the passenger-side mirror was missing.

Camacho spent the next five days going through every traffic ticket issued in the area involving Mitsubishi Galants. Cross-referencing any tickets to drivers with criminal records, he found that Whitfield had recently been stopped by an officer who noted in his report that there was another man in the car and that they had a number of new watches in the vehicle.

“Whitfield’s criminal record had a long history of jewelry theft,” Camacho said. “We knew we were on the right track.” Task force members conducted surveillance and saw that Whitfield’s car was missing a passenger-side mirror.

A search warrant was obtained, and when Whitfield’s house was searched and the pair was arrested, stolen jewelry from the robberies—much of it with price tags still on—was found in the residence.

“It was very satisfying to get these guys off the street,” Camacho said. “They were dangerous individuals, and now they are no longer a threat to the community.”

The FBI is seeking information leading directly to the arrest of Kevin Lamont Carter, a convicted felon wanted for his alleged involvement in the murder of his girlfriend in 1995.

A sophisticated scam is costing companies worldwide millions of dollars.