Crimes Rates are Down

Crimes Rates are Down

According to 2011 Preliminary Report

Preliminary figures released today indicate that the number of violent crimes and property crimes reported by law enforcement across the nation during 2011 decreased when compared to 2010 figures.

Specifically, according to our Preliminary Annual Uniform Crime Report, January-December 2011, violent crimes fell 4.0 percent, and property crimes dropped 0.8 percent. Arson—also a property crime even though its data is considered separately because of various levels of participation by reporting agencies—was down 5.0 percent overall.

Highlights from the preliminary report include:

This preliminary report includes four data tables. The first two tables show the percent change in offenses known to law enforcement for 2011 compared with those for 2010 by population group and region of the country, respectively. The third table reflects the percent change in offenses reported nationwide for consecutive years back to 2007. The fourth table presents the actual number of offenses known to law enforcement for agencies who provided 12 months of complete data and who serve a resident population of 100,000 or more. 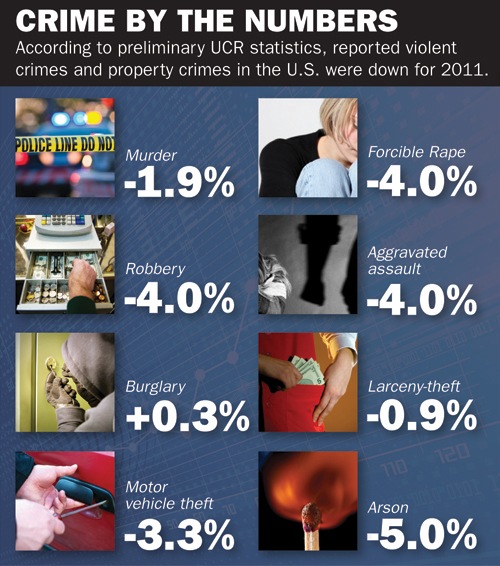 All of the final figures will be published this fall in Crime in the United States, 2011.

Submitting Uniform Crime Reporting (UCR) data to the FBI is a collective effort on the part of city, county, state, tribal, and federal law enforcement agencies to present a nationwide view of crime. Participating agencies voluntarily provide reports on crimes known to them, using uniform offense definitions. For the most part, agencies submit monthly crime reports to a centralized repository in their state. The state UCR program then forwards the data to the FBI’s national UCR program, where staff members first review the information for accuracy and reasonableness, then enter it into the national UCR database.

The information is then publicly disseminated through various reports, including Crime in the United States, Hate Crime Statistics, and Law Enforcement Officers Killed and Assaulted, as well as through preliminary data reports and special reports on particular topics.

As always, the FBI cautions against drawing conclusions by making direct comparisons between cities or individual agencies—valid assessments are only possible with careful study and analysis of the unique conditions that affect each law enforcement jurisdiction.

In October 2009, college student Morgan Harrington left a Metallica concert at the University of Virginia in Charlottesville and disappeared. It would be several months before her body was discovered in a field about 10 miles away.

Snow swirled in New Mexico’s high plains as Special Agent Mac McCaskill slowed his vehicle at the bottom of a hill on the Tohajiilee Reservation. He engaged the four-wheel drive before continuing slowly up the steep, bumpy track on his way to deliver a subpoena in a violent assault case.