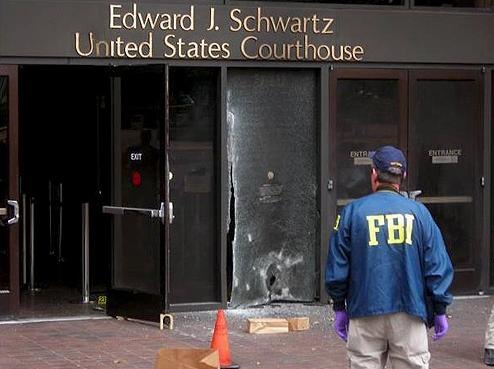 An FBI agent at the scene of the 2008 bombing of a federal courthouse in San Diego.

When the bomb went off in the middle of the night at the San Diego federal courthouse in May 2008, the message seemed clear: This was an act of terror—or possibly revenge. At the time, no one would have guessed that the real motive was all about money.

The strange case of the courthouse bombing came to a close recently when the last defendant, Donny Love, Sr.—the mastermind of the operation—was sentenced to 55 years in prison for using a weapon of mass destruction and other charges.

Love persuaded his sometime girlfriend and two others who trusted him and depended on him for drugs to carry out the bombing. He then planned to contact authorities with information about the crime so he could collect a reward.

“The plot seems so odd and bizarre,” said Special Agent Justin Zuccolotto, who investigated the case, “but you can begin to understand it when you understand Love’s ability to control and manipulate the people around him. His actions showed that he was a predator who didn’t care about anyone but himself.”

The explosive device set in the entrance to the Edward J. Schwartz Federal Courthouse consisted of three powerful pipe bombs placed inside a backpack that was also filled with 110 roofing nails. When it exploded, the bomb blew out the courthouse doors and sent shrapnel and nails flying in all directions—over a block away and at least six stories into the air.

Although no one was injured in the blast, “we were very lucky this wasn’t a murder scene,” Zuccolotto said. “There was no reason to put nails in the bomb; the bomb by itself would have been enough for his scheme.”

After the explosion, there was an immediate response from local authorities and members of the FBI’s San Diego Field Office, including the Bureau’s Evidence Response Team and Joint Terrorism Task Force. Plenty of evidence was found at the scene, including surveillance video showing a person igniting the backpack.

Evidence markers inside the courthouse.

Evidence marker next to a pipe fragment.

A few days later, Love contacted the FBI through an attorney and said he would provide information about the crime in exchange for a $75,000 reward and leniency on criminal charges pending against him. He intended to provide false information, directly from him and from those he controlled.

“His actions were beyond callous,” Zuccolotto said. “Thinking of anybody else’s well being never crossed his mind. It was all about him making a buck or saving his skin.”

Love, 44, who had worked for the local water department for a decade but had recently been fired, was behind on his mortgage payments. He thought the reward money would solve all his problems.

“He really thought he could get away with it,” Zuccolotto said. But his story soon fell apart, and two of his accomplices—including his former girlfriend—later became cooperating witnesses in the case against him. Those two each received 10-year sentences, and another accomplice was sentenced to 11 years.

Zuccolotto credits local authorities; the Bureau of Alcohol, Tobacco, Firearms, and Explosives; the United States Attorney’s Office; the FBI Laboratory; and local, state, and federal members of the Joint Terrorism Task Force for bringing the case to a successful conclusion. “Everybody worked well together,” he said. “We needed to get this guy off the streets.”