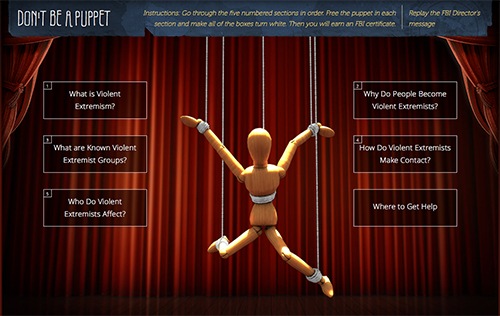 Don’t Be a Puppet: Pull Back the Curtain on Violent Extremism is an interactive website developed by the FBI to open the eyes of teens to the devastating reality and deceptive messaging of violent extremism and to help strengthen their resistance to radicalization and possible recruitment. https://cve.fbi.gov

Today like never before, violent extremists of all kinds are deliberately targeting our nation’s young people with poisonous propaganda—especially in cyberspace, where they are flooding social media with slick recruiting videos and persuasive calls to action.

The FBI’s investigations and analysis indicate that these efforts—to a disturbing degree—are succeeding. Across America, there are young people who are embracing various forms of violent extremism, actively communicating with violent extremists, and helping with recruitment. Without warning, many teens are joining violent extremist groups in the U.S. or leaving their families and traveling to war zones thousands of miles away to enlist in violent extremist movements—some are even plotting and launching attacks in the U.S. and overseas.

In this hyper-connected world—where violent extremist information is only a click away—it’s more crucial than ever that young people learn what violent extremism really is, how it hurts innocent victims and perpetuates violence, and how its recruiting strategies are intended to deceive.

Today, as part of its leading role in helping to prevent terrorist attacks and in sharing its expertise on public safety issues, the FBI is taking the next step in educating communities on violent extremism by launching a new, free program for teens nationwide.

It’s called Don’t Be a Puppet: Pull Back the Curtain on Violent Extremism, and the centerpiece is an interactive website at https://cve.fbi.gov that uses activities, quizzes, videos, and other materials to teach teens how to recognize violent extremist messaging and become more resistant to self-radicalization and possible recruitment.

The site doesn’t refute violent extremist beliefs point by point or discuss matters of faith or politics. Instead, it makes teens aware of the destructive reality of various forms of violent extremism, including hateful attacks based on race, religion, or other factors. Through its Don’t Be a Puppet theme, the program encourages teens to think for themselves and display a healthy skepticism if they come across anyone who appears to be advocating extremist violence.

The Don’t Be a Puppet initiative was developed through the combined efforts of the FBI Office of Public Affairs (OPA) and the Countering Violent Extremism (CVE) Program in the Bureau’s Office of Partner Engagement, with the input and support of other FBI components. A number of community leaders, government and law enforcement officials, high school teens, and other public and private partners from across the U.S. evaluated the site and provided valuable feedback. The consensus was that the program is a positive, proactive tool that addresses a serious threat.

“We want teens to apply their critical thinking skills to this issue just like they would to any subject in school,” says Jonathan Cox, head of the OPA unit that created the website and developed the concept. “We’re saying, ‘Don’t be a puppet,’—in other words, don’t just blindly accept what violent extremists tell you or you could end up being controlled and manipulated by people who want you to hurt or kill innocent people.”

The website is divided into five main sections, each with various activities and elements to complete (see above sidebar for more information). A sixth “Where to Get Help” page offers conflict resolution tips, identifies resources to contact for assistance, and provides links to more information. Teens receive a printable certificate upon completion of the site.

The program is open to anyone in the United States who wishes to participate, but it is designed for a teenage audience. No registration is required to sign up for or use the website. The Bureau also recommends that community groups, resource officers, coaches, school administrators, and parents and families review the site and use it to raise awareness of violent extremism and its growing impact on our nation.

To learn more, visit the Don’t Be a Puppet: Pull Back the Curtain on Violent Extremism website. Community groups, parents, and teachers who are interested in using the program can also discuss the details with the community outreach specialist in their local FBI field offices.

Incidents like the Charleston shootings and the Boston Marathon bombings have demonstrated that extremist violence transcends race and religion and can have a devastating impact on communities. It’s the FBI’s hope that this new initiative can make a difference in helping to keep young people from being radicalized and recruited, now and in the future.

Teens earn an FBI certificate by completing all of the activities in the five sections outlined below. Throughout the site, including during an introductory video by FBI Director James Comey, it is emphasized that free speech and religious liberty are protected under the Constitution of the United States and that having extremist beliefs is legal unless violence is directly advocated or used.

Section 1: What is Violent Extremism?

Section 5: Who Do Violent Extremists Affect?

From violent gangs to cyber security, the FBI has long been in the business of sharing its expertise on public safety issues with a diverse cross-section of young people through various community outreach efforts. Among the FBI’s youth programs:

Adopt-a-School/Junior Special Agent Program: Puts FBI special agents and professional staff into local schools to mentor and tutor kids, showing them how to resist bad influences that could lead them to crime, drug use, gang participation, and violence. During the last fiscal year, more than 800 teens participated in these programs in 28 different FBI field offices.

Safe Online Surfing Internet Challenge: Educates third- to eighth-grade students on cyber safety and online etiquette. Since October 2012, more than 600,000 students in 49 states, the District of Columbia, and three U.S. territories have participated in the program.

Teen Academy: Gives middle and/or high school students an inside look at the FBI and fosters a greater understanding of the Bureau’s work in the community. During the last fiscal year, nearly 1,400 students took part in these academies in 37 field offices.

The wife of former ISIL leader Abu Sayyaf has been charged for her role in a conspiracy that resulted in the death of American citizen Kayla Jean Mueller.