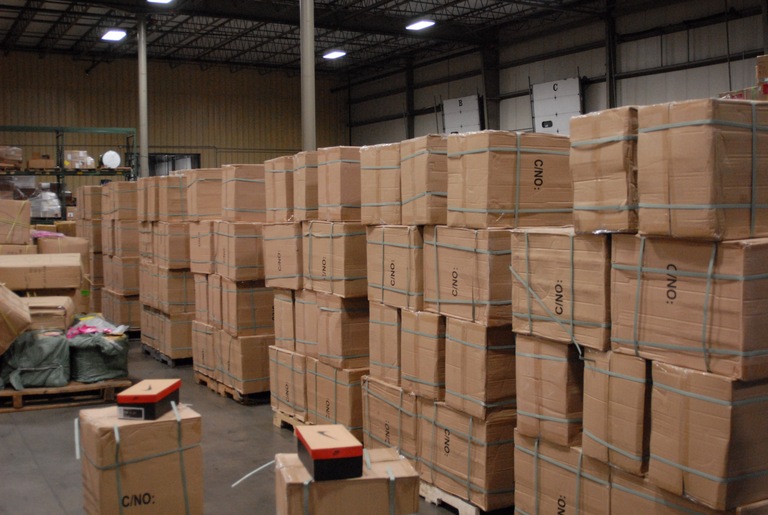 Boxes containing some of the counterfeit goods seized during the investigation of a massive smuggling ring.

When Ning Guo was sentenced to prison earlier this year, it marked one of the final chapters in a massive international counterfeit goods smuggling case—one of the largest ever charged by the Department of Justice—in which criminals attempted to flood the U.S. market with bogus cigarettes, handbags, and sneakers from China that would have been worth $300 million on the retail market.

From November 2009 through February 2012, the smugglers and their conspirators attempted to import hundreds of shipping containers full of counterfeit Nike shoes, Gucci handbags, cigarettes, and other items from China into the U.S. through the Port Newark-Elizabeth Marine Terminal in New Jersey.

When a multi-agency force took down the operation in 2012, nearly 30 individuals were arrested and charged with various counts of conspiracy to traffic in counterfeit goods, as well as other crimes—including money laundering and drug trafficking.

“This was a complex case,” said Special Agent Ron Pascale, who worked the investigation from our Newark Division. “But over time, we identified the entire conspiracy and dismantled it.”

In 2008, our sources overseas identified a Chinese subject who wanted to smuggle counterfeit goods into the U.S. from China. That individual was introduced to an FBI undercover agent posing as a person at the port who had connections and could clear containers through customs. Later, when the smuggler shipped a container of counterfeit cigarettes and learned that his U.S. buyer had fallen through, he asked our undercover agent to sell it for him—and he gave the agent a list of potential buyers.

With that list, Pascale said, the investigation expanded significantly—and soon led to Ning Guo. Known as Danny, Guo bragged that he was the best person in the New York region to store and distribute counterfeit merchandise.

Using a variety of undercover operatives and working with other law enforcement partners—including U.S. Immigration and Customs Enforcement and U.S. Customs and Border Protection—conducting parallel investigations, the conspiracy was unraveled from top to bottom:

In addition to undercover operatives, investigators used court-authorized wiretaps and sophisticated surveillance techniques to gather evidence. “At every step of the way, we had the bad guys incriminating themselves in their own words,” Pascale said, “and it was usually on tape and video.”

The smuggling investigation also uncovered a scheme to import 50 kilograms of crystal meth into the U.S. “Counterfeiting always seems to be the gateway into something else,” Pascale explained. “If these guys think they can get counterfeit shoes into the country, pretty soon they think they can get anything in. And that’s a problem.”

He added, “Counterfeiting is never going to stop, so there will always be a reason to smuggle. That’s why we will never stop working these cases.”