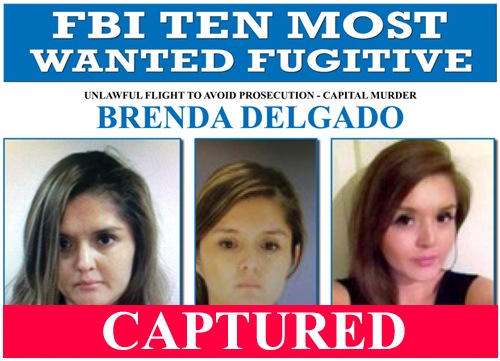 Brenda Delgado, wanted for her role in a murder-for-hire plot that led to the death of a prominent pediatric dentist in Texas, has been named to the FBI’s Ten Most Wanted Fugitives list.

A reward of up to $100,000 is being offered for information leading directly to the arrest of Delgado, who has been described as a master manipulator and may be on the run in Mexico.

On September 2, 2015, Dr. Kendra Hatcher was murdered in the parking garage of her Dallas apartment complex. Delgado, who was studying to be a dental hygienist, is suspected of hiring two co-conspirators to carry out the murder. “Apparently she was jealous because the victim was dating her ex-boyfriend,” said Special Agent Jason Ibrahim, a member of the FBI’s Dallas Violent Crimes Task Force.

“Brenda Delgado was able to effectively manipulate everyone she involved in her calculated scheme,” said Thomas M. Class, Sr., special agent in charge of the FBI’s Dallas Division. “Although she didn’t pull the trigger herself, she is still responsible for the murder,” Class added, “and through international publicity and a significant reward offering, we intend to find her and to bring her to justice.”

A Mexican citizen, Delgado is believed to have fled the country shortly after being interviewed by investigators about the killing. She has been charged with capital murder, and a federal fugitive warrant has been in place since October 2015. Both co-conspirators have been arrested and are in custody.

Born Brenda Berenice Delgado Reynaga, the 33-year-old fugitive is described as a Hispanic female, 5 feet 5 inches tall, weighing approximately 145 pounds, with brown eyes and black hair that may be dyed a lighter color. She has a butterfly tattoo on the small of her back. Delgado has ties to Mexico, and investigators strongly believe she may be residing there. She should be considered armed and dangerous.

The search for Delgado is being coordinated by the Dallas Violent Crimes Task Force, which consists of FBI personnel and detectives from the Dallas and Garland Police Departments. Lee Thompson, a Dallas Police Department detective and member of the task force, explained that the unusual circumstances behind Hatcher’s murder have drawn publicity to the case from around the world.

Delgado told one of her co-conspirators that she was connected with a cartel and could provide him with a steady source of drugs if he carried out the murder. “He thought he had an in with the cartel,” Thompson said.

In the days leading up to the murder, it is believed Delgado learned that her ex-boyfriend and Hatcher were planning a vacation to Cancun and that he had introduced Hatcher to his parents.

Delgado is the ninth woman to be placed on the FBI’s Ten Most Wanted Fugitives list. Since its creation in 1950, 474 of the 506 fugitives named to the list have been apprehended or located—156 of them as a result of citizen cooperation.

We need your help: Investigators urge anyone with information concerning Delgado to take no action themselves. Instead, they should contact the FBI by calling 1-800-CALL-FBI or submitting a tip online. The FBI’s Dallas Field Office can be reached at 972-559-5000. For possible sightings outside the United States, contact the nearest U.S. Embassy or Consulate.