03/27/13 Update: Edwin Ernesto Rivera Gracias was taken into custody in El Salvador and transferred to authorities in Denver, Colorado.

Edwin Ernesto Rivera Gracias, wanted for the murder of a 69-year-old Colorado man who was dumped on the side of the road after being brutally beaten and stabbed, has been named to the Ten Most Wanted Fugitives list.

A reward of up to $100,000 is being offered for information leading directly to the arrest of Rivera Gracias, who is a member of the violent Mara Salvatrucha gang—MS-13—and is believed to be in El Salvador. 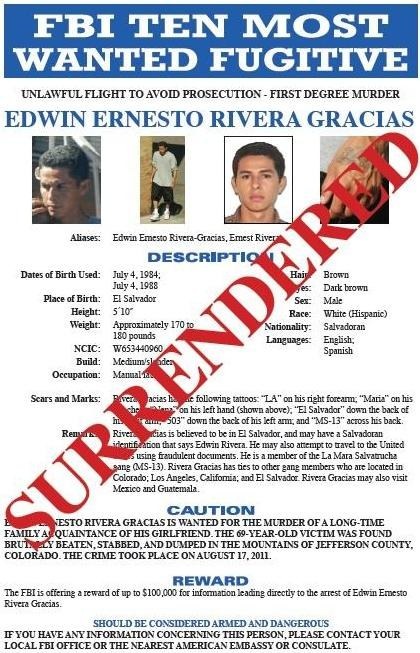 “Today we are asking for media and public assistance in bringing this dangerous fugitive to justice,” said James Yacone, special agent in charge of our Denver Field Office.

Special Agent Phil Niedringhaus, who leads the FBI’s violent crimes squad in Denver, noted, “MS-13 is one of the most violent gangs in the United States, and Rivera Gracias appears to have embraced that lifestyle.”

The fugitive, a Salvadoran national, is approximately 29 to 33 years old with brown hair and brown eyes. He is 5’10” tall, weighs about 170 pounds, and has a variety of tattoos, including “MS-13” across his back, “LA” on his right forearm, and “Nena” on his left hand.

The murder he is charged with occurred in August 2011. The victim—a long-time family acquaintance of Rivera Gracias’ teenage girlfriend—was choked, beaten, and stabbed. His body was then dumped in the mountains outside of Denver, where it was later discovered by a bicyclist.

The investigation soon focused on Rivera Gracias and accomplices, including his girlfriend, explained Special Agent Russ Humphrey, a member of the FBI’s Rocky Mountain Safe Streets Task Force, who worked the case. “The murder was vicious,” Humphrey said.

Rivera Gracias fled from Denver to Los Angeles and is now believed to be in his native El Salvador. Intelligence analysts with our MS-13 National Gang Task Force helped to positively identify Rivera Gracias, who also goes by the names Ernest Rivera and Edwin Rivera.

In 2004, the FBI formed the MS-13 National Gang Task Force to counteract the growth of the violent international street gang. The intelligence-driven task force combines the expertise, resources, and jurisdiction of federal agencies and focuses on maximizing the flow of information and intelligence, coordinating investigations nationally and internationally, and helping state and local law enforcement improve operations and prosecutions targeting MS-13.

Rivera Gracias has ties to other MS-13 gang members in Colorado, Los Angeles, and El Salvador and may attempt to gain entry to the U.S. using fraudulent identification. He may also visit Mexico and Guatemala.

“Elevating Rivera Gracias to the Top Ten list sends a message,” said Special Agent Niedringhaus. “No matter where you are as a fugitive—in the U.S. or anywhere in the world—we are coming after you.”

He added, “The FBI has put significant resources into fighting MS-13, and our gang task force works closely with our international partners to gather intelligence to help dismantle this transnational group. I think our chances of catching Rivera Gracias are excellent, especially with the substantial reward being offered.”

We need your help: If you have any information concerning the whereabouts of Rivera Gracias, please contact the FBI’s Denver Field Office at 303-629-7171 or your nearest law enforcement agency or U.S. Embassy or Consulate. You can also submit a tip online.

Since its creation in 1950—63 years ago today—498 fugitives have been on the Ten Most Wanted Fugitives list and 467 have been apprehended or located, 154 of them as a result of citizen cooperation.

Cartha DeLoach, a trusted adviser to J. Edgar Hoover who led the MLK probe, dies at 92.

The case of a Middle Eastern crime ring shows how millions in goods are swiped annually.