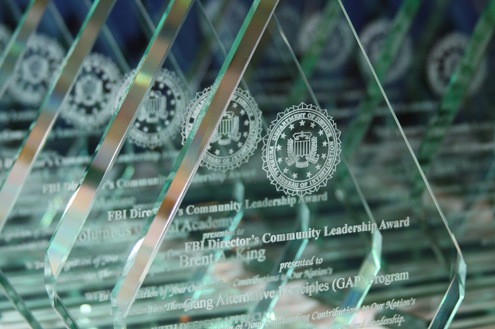 Nearly 60 individuals and organizational representatives gathered today for a ceremony in their honor at FBI Headquarters in Washington, D.C.

An Albuquerque man who devotes his time to educating his community about cyber threats. A Jacksonville woman whose child protection group assists law enforcement with crimes against children investigations. An Arizona organization that is dedicated to meeting the needs of murder victims’ families. A man who established a volunteer organization in Delaware to serve at-risk youngsters.

Since 1990—through the Director’s Community Leadership Awards (DCLA)—the FBI has publicly recognized the achievements of individuals and organizations like these who have gone above and beyond the call to service by making extraordinary contributions to their communities in the areas of terrorism, cyber, drug, gang, or violence prevention and education. And this year is no exception: today, nearly 60 individuals and organizational representatives—all 2011 DCLA recipients—gathered for a ceremony in their honor at FBI Headquarters in Washington, D.C.

Director Mueller, who presented a specially designed plaque to each recipient, called the honorees “catalysts for change” in their communities and said that each one shared “a willingness to lead...a commitment to improving your neighborhoods...and a desire to make this country safer for your fellow citizens.”

Each of our field offices is given the chance to present the award at the local level during the year, and the honorees are then recognized at the annual national ceremony the following spring. FBI Headquarters selects at least one winner as well. A snapshot of this year’s DCLA recipients shows the range of good work done across the nation:

Congratulations to all the winners. It’s our hope that their selfless actions to enhance the lives of neighbors and protect communities will inspire others to offer their time and talents to their own communities.