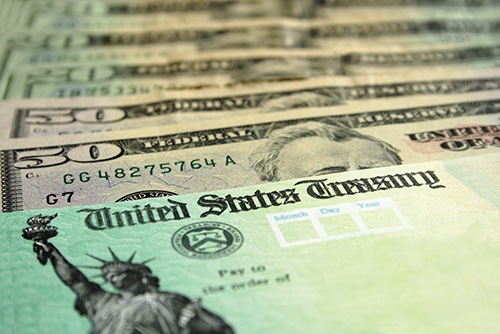 The treasury checks were meant for military families, taxpayers receiving refunds, and Social Security beneficiaries—but they wound up in the hands of thieves instead.

At the center of it all was career criminal Asad Abdullah, who orchestrated the elaborate scheme from inside a Georgia state prison. With regular access to contraband cellphones, Abdullah was able to contact his younger brothers in Atlanta, and he soon had the resources he needed to mobilize the family-run criminal enterprise.

Here’s how it worked: Thieves stole checks from various sources, including the U.S. mail, and middlemen purchased the checks at a percentage of their face value, usually 25 percent. Meanwhile, identification manufacturers were paid to produce counterfeit Georgia driver’s licenses matching the names and addresses of the victims, but with photos of the scheme’s check runners, who would cash the checks at grocery stores, discount supermarkets, and check-cashing outlets.

While U.S. Treasury check-cashing was a regular activity for Abdullah’s crew, the ambitious enterprise also engaged in credit card fraud. Inside sources working at big-box stores with regular access to customer and store credit card data provided the thieves with a steady flow of personal information. This data was used to produce counterfeit identification documents so the fraudsters could pose as real store club members. Trips to stores throughout Georgia, Tennessee, and Alabama resulted in brand new replacement credit cards that were ultimately used to purchase gift cards, gas, groceries, and other items.

The ring was finally derailed following a series of early morning raids and takedowns on September 24, 2014, which turned up weapons, cash, and identity document manufacturing hardware.

“Fraud and identity theft crimes are a serious problem in Atlanta,” added the case agent. “Our combined efforts in this particular case serve as a warning to would-be criminals on the brink of preying on unsuspecting victims.”

Sentencing was announced on February 16, 2016 for 18 of the 19 Atlanta criminals convicted for their roles in the crime ring. The 19th and final defendant is scheduled to be sentenced in the near future.

Three members of a Syrian hacker collective were charged for intrusions into U.S. websites.