When you start up your car, you’re greeted with some familiar sounds, like the rev of the engine and the songs on the radio.

But then you hear a strange noise—and you notice a strong odor, too. You realize something’s wrong.

It’s likely that someone has stolen your catalytic converter—a crime that’s happening to drivers all over the country.

As the result of recent operations by the FBI, Homeland Security Investigations (HSI), and other law enforcement partners, 21 people have been charged in connection with a nationwide, multimillion-dollar scheme involving stolen catalytic converters.

They then extracted precious metal powders from the catalytic converter components. These powders, which they sold to a metal refinery, netted them more than $545 million.

In a case like this, law enforcement partnerships are key, said Supervisory Special Agent Jonathan Fairbanks of our Sacramento Field Office: “What local law enforcement sees is maybe one or two people that have five or 10 stolen catalytic converters in the car. But what seems to be a local problem actually fuels a nationwide, systematic procurement of these catalytic converters.” That organized, national nature of the ring is what led to the FBI and other federal partners’ role in this investigation.

“We really took out some of the major players who are involved throughout the United States,” added Supervisory Special Agent Patricia Curran, who works criminal investigations out of FBI Headquarters. “We want to put the message out there that we’re actively pursuing these investigations and trying to stem these thefts throughout the country.”

What’s a catalytic converter—and why are they stolen?

It's a part of your car you may have even never heard about, but your catalytic converter has an important job: transforming toxic emissions from a vehicle’s exhaust into harmless gasses. This helps control pollution and smog.

Catalytic converters are made of precious metals like platinum, rhodium, and palladium. These materials can return a high profit when sold to a metal scrapper or refinery.

Thefts of catalytic converts have increased alongside the rising value of their metal components. They’re also easy to remove—it can take less than a minute to cut one off a car.

And some catalytic converter thieves resort to violence during the crime, even having someone nearby with a gun in case someone tries to stop them, Fairbanks added.

What happens if I’m a victim of catalytic converter theft?

If your catalytic converter is stolen, you’ll want to file a report with local police and contact your insurance company.

“It’s disruptive,” said Fairbanks. “It takes time out of your day. There’s a cost to it. You have to go to your insurance or pay out of pocket, have to go to the dealer, and your vehicle’s inoperable until you get it fixed. 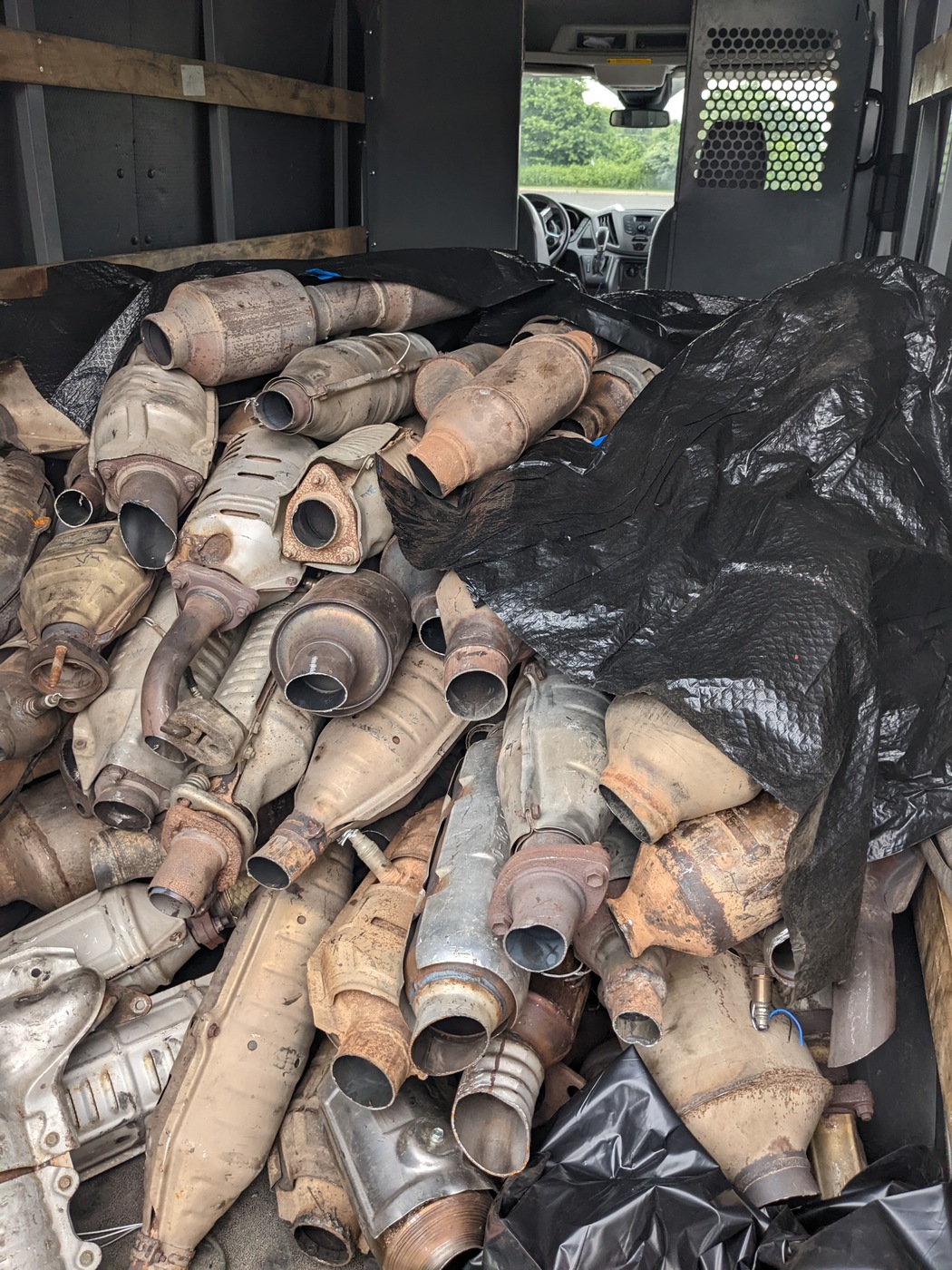 Above: As part of the operation efforts, FBI agents collected thousands of catalytic converters from junk yards and cut them to make them appear stolen. They then offered them up for sale. Below: At the time of the takedown, seizures, and arrests, one suspect had amassed multiple pallets of catalytic converters, which were first shipped to a refinery and eventually overseas for recycling purposes. 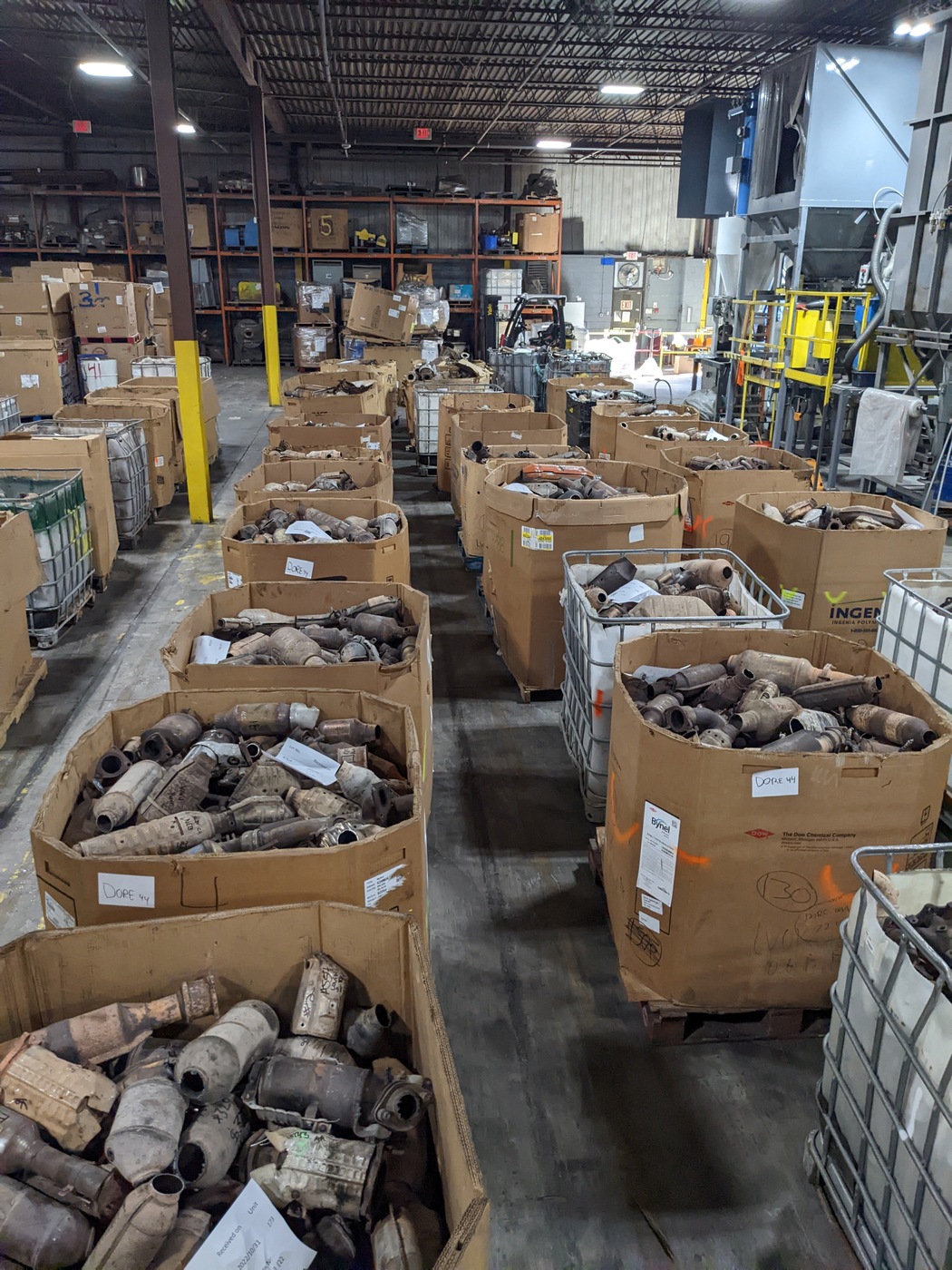 And it’s a pricey but essential piece to replace: catalytic converters are federally mandated. Installing a new one could cost upwards of $3,000. Even if your auto insurance covers it, you may have to pay a deductible, and your insurance premium could go up after filing a claim.

Most importantly, if you encounter someone trying to steal your catalytic converter, Curran stressed that you not get involved.

“If you see the crime in progress, call the police immediately. Don’t try to interfere yourself because there have been so many violent incidents associated with these thefts.”

You can learn more about the FBI’s work investigating major thefts and violent crime at fbi.gov/violentcrime.

The FBI and U.S. Marine Corps held a unified physical training event, along with a career fair, at Marine Corps Base Quantico.

The FBI visited 11 Historically Black Colleges and Universities (HBCU) this fall in an effort to draw more candidates from diverse backgrounds into the FBI.