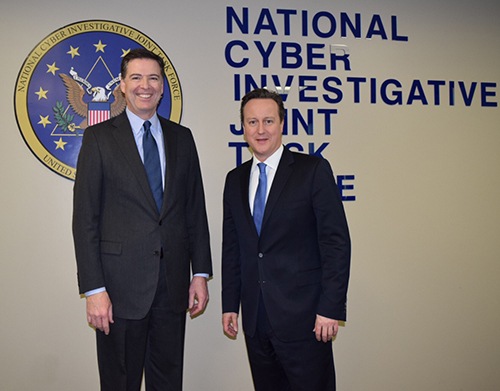 FBI Director Comey (left) and Prime Minister Cameron met at the NCIJTF in Virginia on January 16, 2015

While at the facility, Prime Minister Cameron also received briefings on cyber threats and vulnerabilities, the Bureau’s investigation into the recent Sony cyber intrusion, and the work of the NCIJTF. The NCIJTF—made up of representatives from nearly two dozen federal intelligence, military, and law enforcement agencies who work with local law enforcement agencies and international and private industry partners—serves as the government’s central hub for coordinating, integrating, and sharing information related to cyber threat investigations.

The visit to the NCIJTF came on the heels of Prime Minister Cameron’s trip to Washington, D.C., where he met with President Barack Obama on cyber security and other pressing matters.

The malware’s use is increasing, but the FBI and partners are working to combat this cyber threat.

Inside an extreme case that resulted in justice for six slain victims of a drug trafficker.