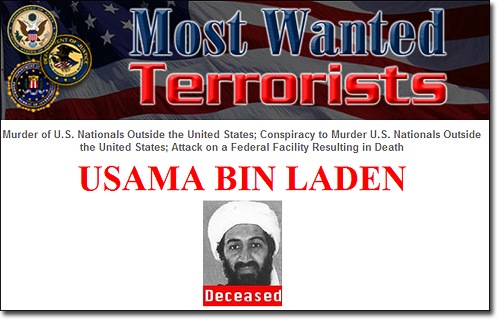 Bin Laden was a suspect in a number of terrorist attacks around the world in addition to the 9/11 attacks. View Wanted Poster

The mastermind of the attacks on September 11, 2001, that killed thousands of innocent men, women, and children has been killed.

President Barack Obama made the announcement late Sunday evening, May 1, in a televised address to the world. He said he had been briefed by the intelligence community last August that bin Laden was in hiding “within a compound deep inside of Pakistan.” Over the intervening months, intelligence agencies worked to confirm the intelligence. Then last week, President Obama determined there was enough intelligence to take action.

“Today, at my direction, the United States launched a targeted operation against that compound in Abbottabad, Pakistan,” the president said from the East Room of the White House. “A small team of Americans carried out the operation with extraordinary courage and capability. No Americans were harmed. They took care to avoid civilian casualties. After a firefight, they killed Osama bin Laden and took custody of his body.”

Bin Laden was on the FBI Ten Most Wanted Fugitives list as well as the State Department’s Most Wanted Terrorists list.

Well before the events of 9/11, bin Laden had openly declared war on the U.S. and was committed to killing innocents. His al Qaeda group was responsible for the 1998 bombings of the U.S. Embassies in Dar es Salaam, Tanzania and Nairobi, Kenya. The attacks killed over 200 people. Bin Laden was indicted for his role in planning the attacks and added to the FBI’s Ten Most Wanted Fugitives list in 1999.

Intelligence agencies quickly learned that the 9/11 attacks were carried out by bin Laden’s terrorist organization, and in October 2001, his name was added to the U.S. Department of State’s Most Wanted Terrorists List.

“Tonight, we give thanks to the countless intelligence and counterterrorism professionals who’ve worked tirelessly to achieve this outcome,” President Obama said. “The American people do not see their work, nor know their names. But tonight, they feel the satisfaction of their work and the result of their pursuit of justice.”

Our continuing series looks at the FBI's role in a burgeoning Afghan biometrics program.