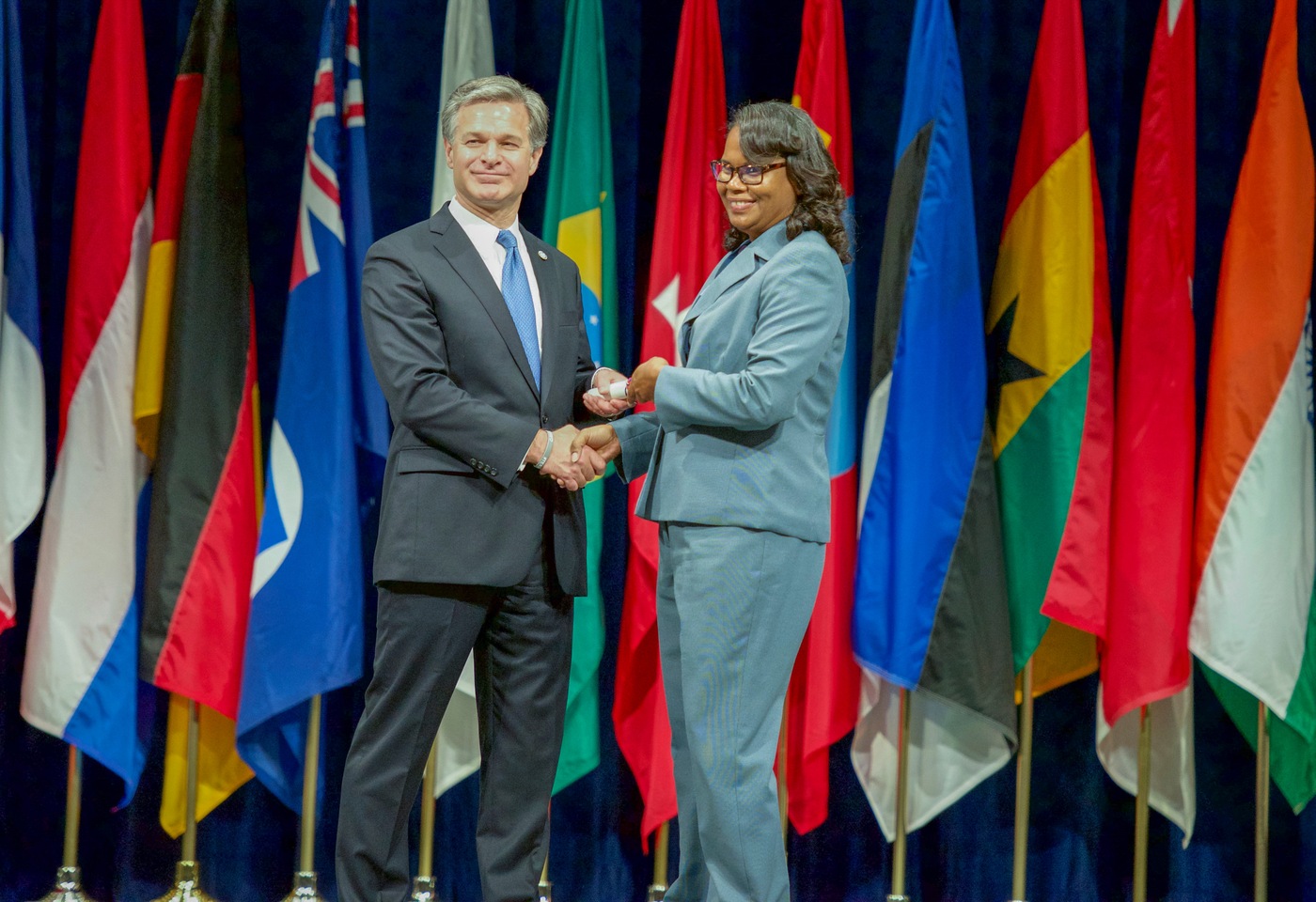 Sherlet Ramclam, an inspector for the Belize Police Department, with FBI Director Christopher Wray at the National Academy graduation on June 7, 2019, in Quantico, Virginia.

Last month, during her own 10-week tour as a student in the National Academy’s 276th class in Quantico, Virginia, Inspector Ramclam was moved to send a message to her boss to thank him for the work he was doing to push for institutional change.

“Everything that was mentioned in class is the way that we’re going,” Ramclam said. “I told him I appreciate it because now I’m seeing what he is doing and what his best interest is in for the department to move forward. I think that we’re in a better place now than we were a couple years ago.”

Driving that type of institutional evolution and connecting law enforcement agencies worldwide are among the goals of the National Academy, which today graduated 256 students, including 35 international law enforcement officers like Ramclam. The department in Belize has several National Academy graduates, but Ramclam is the country’s female police delegate.

A single mother of four born in the former British colony’s village of Independence, Ramclam knew early on hers would be a life of service to others. She was a youth leader in her church’s preschool for several years, leading kids on trips and into discussions of faith and community.

“I wanted to do something that would help people, to make their life better,” she said recently. “So I continued to search for something to help me do more for my country—not only for my community, but for my country.” She said it was a calling to become a police officer. “We do not choose,” she said. “We are called.”

That was 22 years ago, on May 11, 1997. Today she commands 42 police officers in Placencia, a coastal village popular with tourists on the Caribbean coast of Belize. She says her dual priorities are community policing to protect 6,000 residents and thousands more tourists and looking out for the officers under her. She also implores her officers to follow the golden rule to treat others as one would wish to be treated.

“That is a thing I try to instill in other people is don't treat them badly,” Ramclam said. “I tell officers, ‘You need to deal with these guys because they are human beings. Today it might be them, but tomorrow it could be you or me.’”

A central goal of the National Academy is exposing students to a variety of fresh perspectives—offered up by the FBI’s instructors and their classmates—that might challenge long-held, institutional, or outdated views. 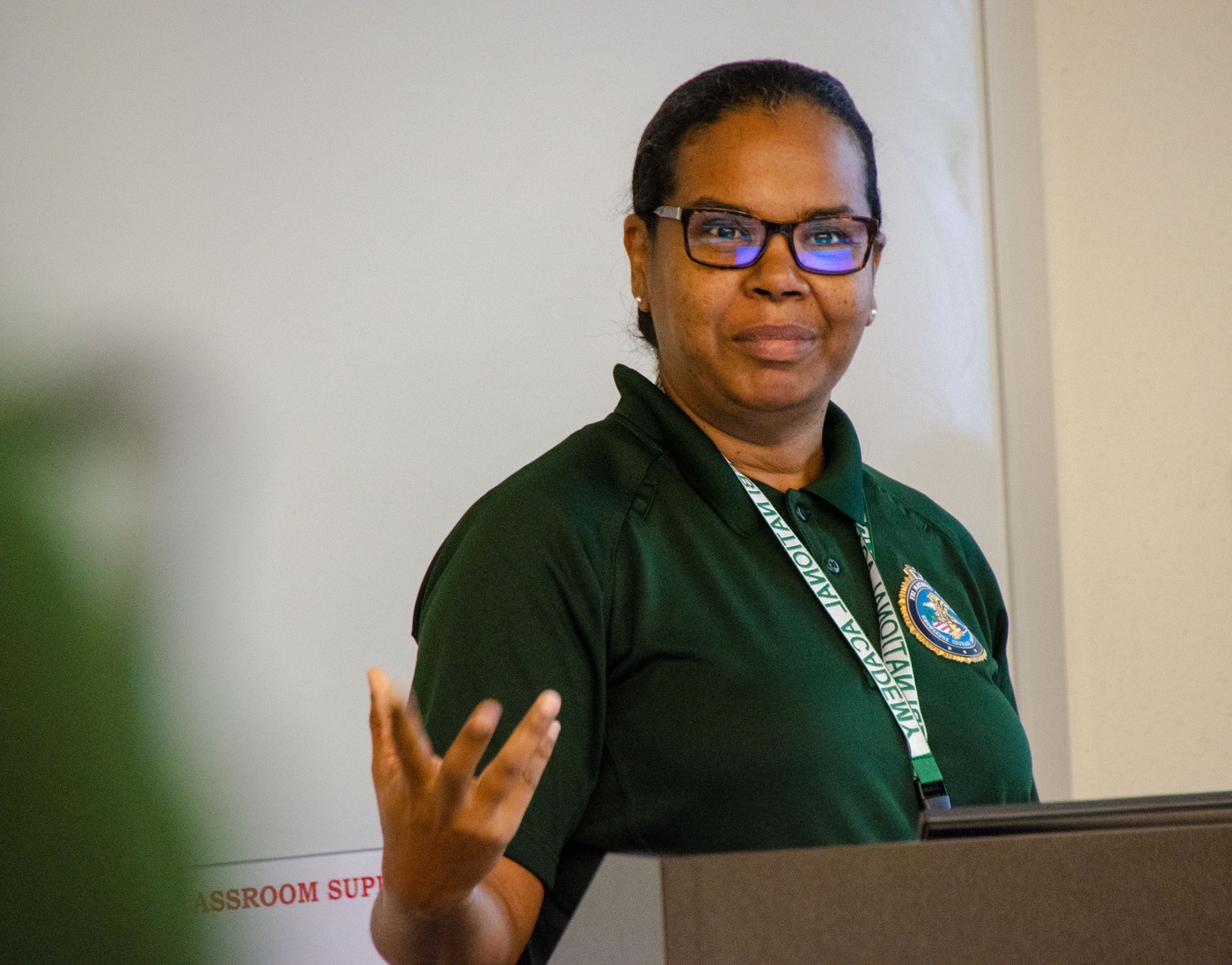 “I wanted to do something that would help people, to make their life better.” 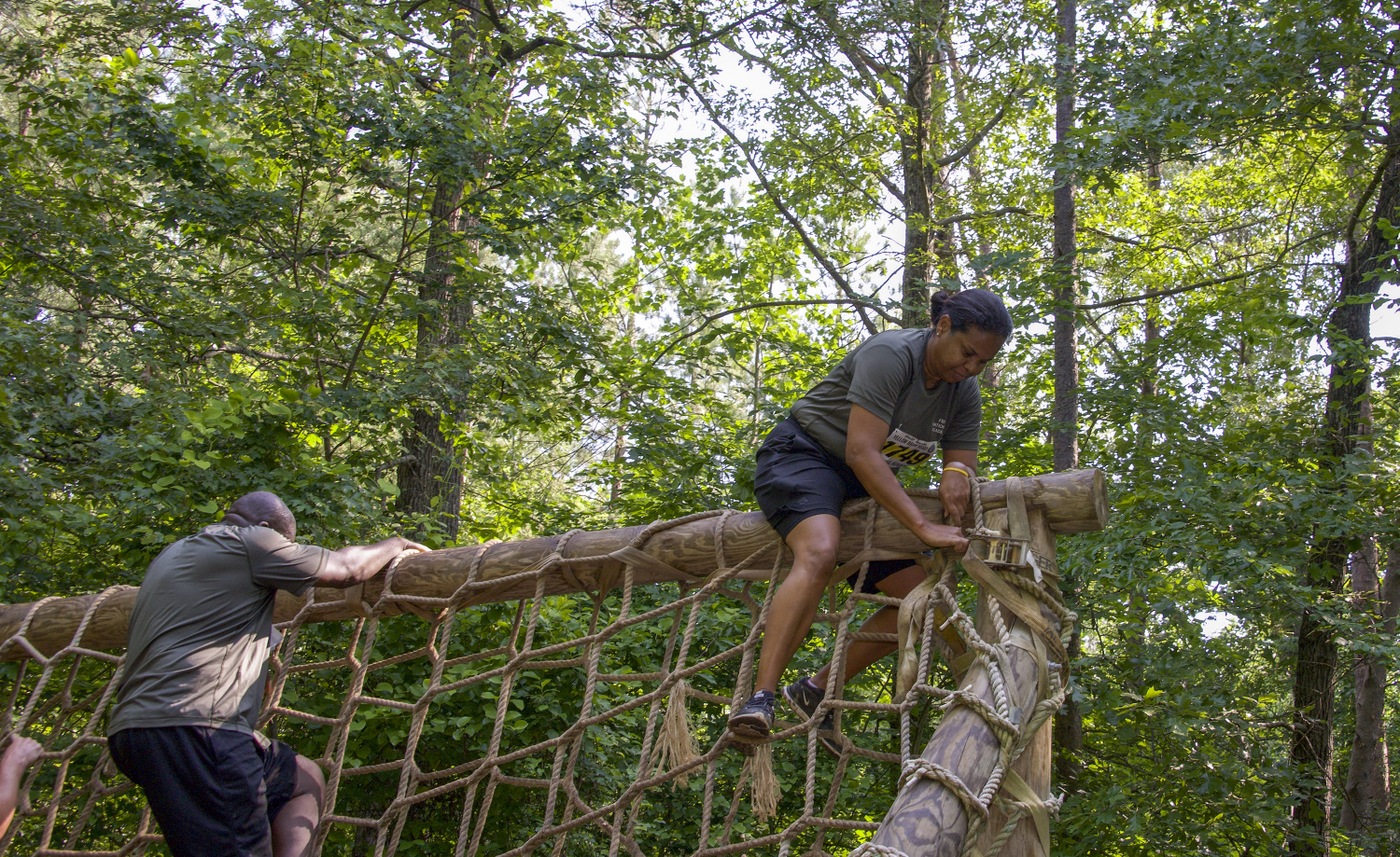 Sherlet Ramclam, an inspector for the Belize Police Department, overcomes an obstacle on the Yellow Brick Road, a 6.1-mile fitness course that is part of the National Academy's training regimen.

“When creativity and innovation is stifled as a practice—not just accidentally but as a practice—you need that fresh perspective from other students, especially one of Sherlet’s experience and caliber, to really change those belief systems in a different way,” said Special Agent Christian Anglin, a National Academy supervisor and instructor.

For Ramclam, the biggest takeaway will be a renewed emphasis on officer wellness. During a recent class presentation, her group cited statistics showing the life expectancy of law enforcement officers to be 20 years less than that of civilians. They talked about the multi-disciplinary approach to wellness and the need to codify officer well-being into department policy. By focusing on officer wellness, Ramclam feels she will have a healthier workforce that can better project authority, command respect, and serve the community.

Another foundational tenet of the National Academy is that bringing together police from disparate agencies and countries can pay huge dividends down the line for the agencies and the Bureau. Graduates can cite examples where complex cross-border cases were solved because they were able to call a classmate—or the FBI—to help run down leads or otherwise assist.

James Windsor, the FBI’s Mexico-based legal attaché for Belize, who invited Ramclam to study at the National Academy, said the relationship works both ways. “As crimes do occur in Belize in which the FBI has jurisdiction,” he said, “having a National Academy graduate there has shown to be incredibly useful in starting and continuing join investigative efforts.”

Ramclam said the National Academy also opened her eyes to new ways to get things done, from running a successful department to closing cases. “I think it’s a plus because so many times we have a case unsolved or we don't know where to turn to,” she said. “But now we have an avenue where we can ask questions.” 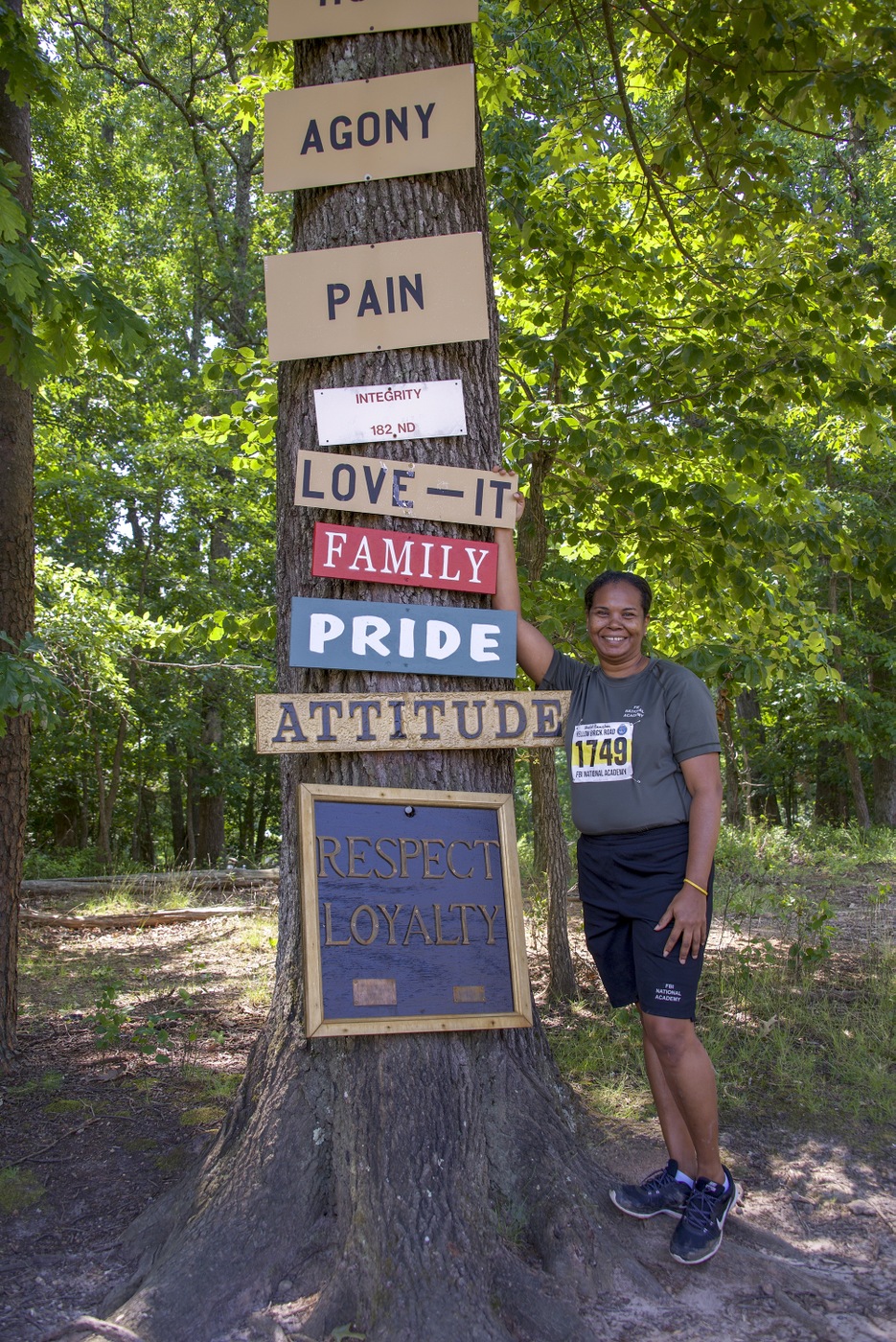 Sherlet Ramclam, an inspector for the Belize Police Department, poses next to a signpost on June 4, 2019, at the FBI's National Academy in Quantico, Virginia. 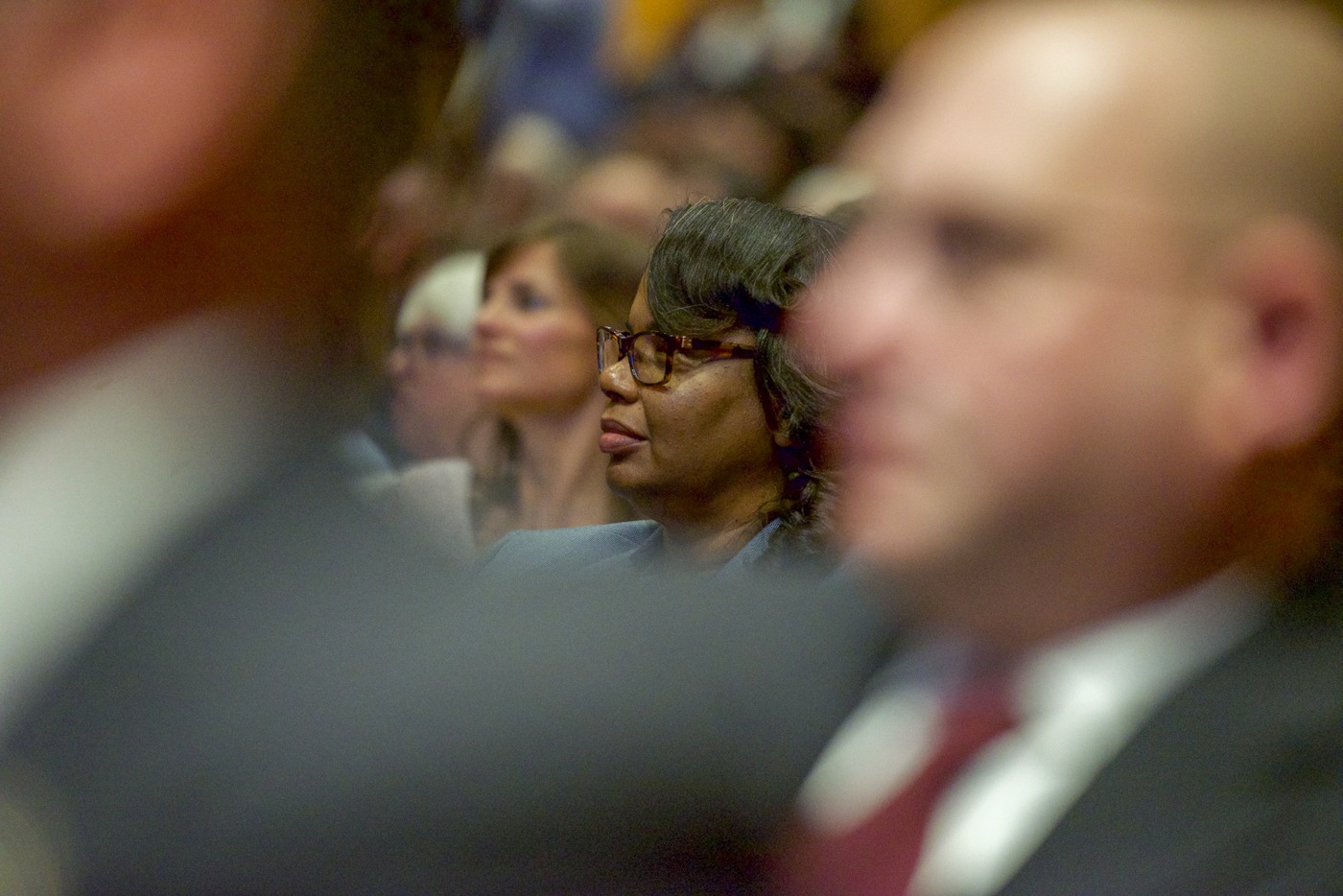