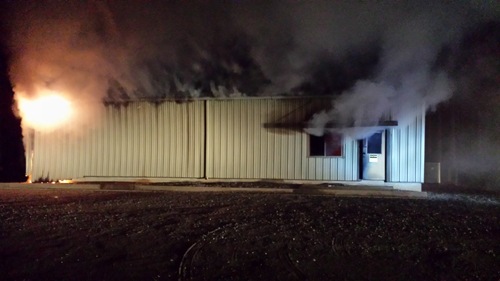 On the afternoon of August 21, 2013, the FBI’s Little Rock Field Office was notified by a local energy provider about a downed 500,000-volt power line near an active railroad track in Cabot, Arkansas. A power outage ensued. Company officials and local law enforcement believed that very early in the morning, someone had climbed a 100-foot tall support tower and intentionally sawed off the shackles that held up the power line, which then fell across the railroad tracks. A short time later, a train struck the line and severed it.

The FBI was called into the matter because sabotaging an energy facility and causing more than $100,000 in damage is a federal crime. According to energy company officials, the damage in this instance was $550,000.

A search of the crime scene and subsequent investigative activity by FBI Little Rock’s Joint Terrorism Task Force—aided by our local law enforcement partners and power company officials—revealed a great deal of information about what had happened. 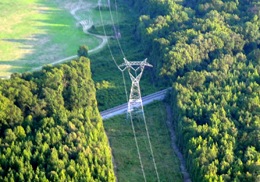 In August 2013, Jason Woodring climbed this electrical tower and loosened one of the power lines, which then fell across adjacent railroad tracks.

In addition to the power line’s support tower shackles being cut with a hacksaw (which had been left behind), someone had loosened most of the bolts holding the support tower to its cement base. Investigators believed that in a previous attempt to damage the support tower and take down the power line, the perpetrator had taken a steel cable—insulated in blue plastic hosing that’s often used for pool maintenance—and tied one end to the bottom of the support tower and the other end to a tree across the railroad tracks in the hopes that a train would run into the cable, pulling down the entire support tower and possibly toppling several nearby towers. Instead, the cable simply snapped when hit by the train, and the tower—and power line—remained in place. Pieces of the cable and the blue hosing from that attempt were found at the crime scene.

But then there were two more seemingly related incidents:

On September 29, 2013, again very early in the morning, an energy provider received an intruder alert at an extra-high voltage switching station in Scott, Arkansas, which was soon followed by a series of other alarms. Local law enforcement officers responded to find the station on fire. Damages in this instance exceeded $4 million.

And on the morning of October 6, 2013, an energy provider in the Jacksonville, Arkansas area experienced a loss of power for several hours, impacting thousands of people. Not long afterward, investigators found that a 115,000-volt transmission line had fallen down after someone managed to cut into two power poles and pull down one of the poles using a tractor. Damages were close to $50,000.

A few days later, on October 11, 2013, local law enforcement responded to reports of an explosion in a Jacksonville neighborhood and determined that it occurred under the power lines that ran alongside the residence of Jason Woodring, a self-employed pool maintenance worker who lived there with his mother. Because Woodring’s residence was close to the location of the October 6 sabotage incident and because the tractor used to cut into the power poles in that incident was stolen from a location directly across the street from Woodring’s home, local police suspected this particular explosion might be related to the previous acts of sabotage. They reached out to Bureau agents, who—while at Woodring’s house—noticed discarded blue hose similar to that found at the August 21 incident.

During an interview with federal agents, Woodring ultimately confessed to all three incidents, as well as the explosion that brought law enforcement to his house (using a fishing pole, he had apparently cast a piece of wire over the power lines near his home, which caused the blast). He later pled guilty.

While Woodring’s motives for his activities were not clear, he did leave some vague anti-government messages at two of the crime scenes, and at his recent sentencing hearing, he told the judge that he was trying to help society. He also pled guilty to being an illegal drug user in possession of various firearms and ammunition.

Woodring was ordered by the judge to pay more than $4 million in restitution to one energy company and nearly $50,000 to another.

The power grid attacks, according to Eastern District of Arkansas U.S. Attorney Christopher Thyer, “had the potential to put many lives at risk. When we depend on electrical power not only for comfort and convenience but also for safety, security, and life-sustaining equipment, not knowing where the next attack would occur held the public hostage to an unknown attacker.”

But thanks to the collaboration between the FBI and its partners, that “unknown” attacker was identified and brought to justice.

The FBI returned a rare Stradivarius violin to the heirs of deceased violinist Roman Totenberg at a ceremony at the U.S. Attorney’s Office in Manhattan.