Taking a Trip to the ATM? 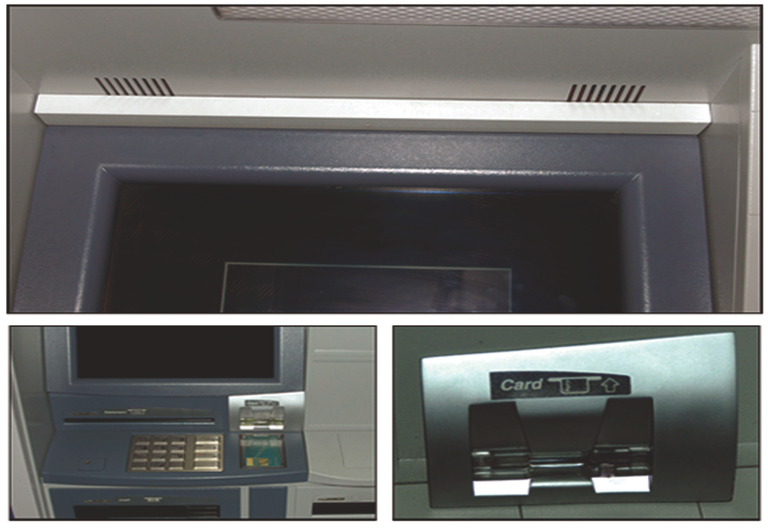 Their scheme involved installing surreptitious surveillance equipment on New York City ATMs that allowed them to record customers’ account information and PINs, create their own bank cards, and steal from customer accounts.

What these two did is called “ATM skimming”—basically placing an electronic device on an ATM that scoops information from a bank card’s magnetic strip whenever a customer uses the machine. ATM skimming is a growing criminal activity that some experts believe costs U.S. banks hundreds of millions of dollars annually.

The devices planted on ATMs are usually undetectable by users—the makers of this equipment have become very adept at creating them, often from plastic or plaster, so that they blend right into the ATM’s façade. The specific device used is often a realistic-looking card reader placed over the factory-installed card reader. Customers insert their ATM card into the phony reader, and their account info is swiped and stored on a small attached laptop or cell phone or sent wirelessly to the criminals waiting nearby.

In addition, skimming typically involves the use of a hidden camera, installed on or near an ATM, to record customers’ entry of their PINs into the ATM’s keypad. We have also seen instances where, instead of a hidden camera, criminals attach a phony keypad on top of the real keypad ... which records every keystroke as customers punch in their PINs.

Skimming devices are installed for short periods of time—usually just a few hours—so they’re often attached to an ATM by nothing more than double-sided tape. They are then removed by the criminals, who download the stolen account information and encode it onto blank cards. The cards are used to make withdrawals from victims’ accounts at other ATMs. 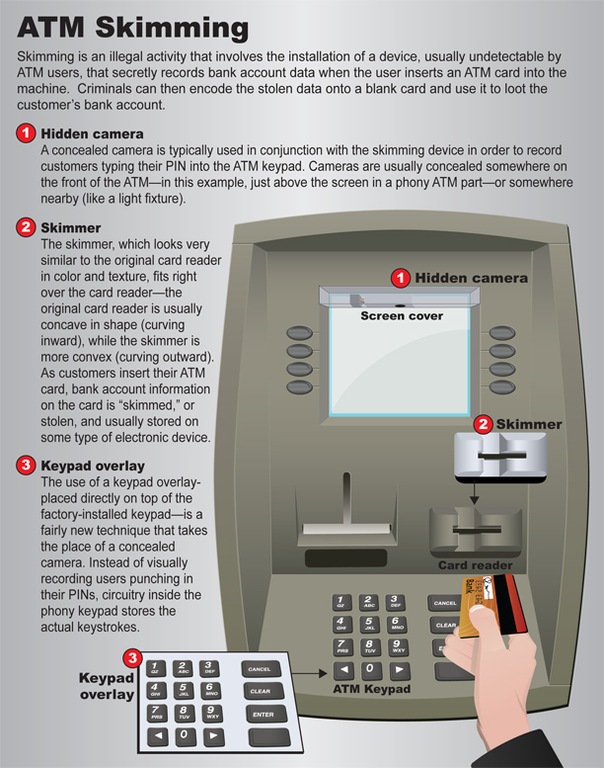 How to Avoid being Skimmed

- Inspect the ATM, gas pump, or credit card reader before using it…be suspicious if you see anything loose, crooked, or damaged, or if you notice scratches or adhesive/tape residue.
- When entering your PIN, block the keypad with your other hand to prevent possible hidden cameras from recording your number.
- If possible, use an ATM at an inside location (less access for criminals to install skimmers).
- Be careful of ATMs in tourist areas…they are a popular target of skimmers.
- If your card isn’t returned after the transaction or after hitting “cancel,” immediately contact the financial institution that issued the card.

Because of its financial jurisdiction, a large number of ATM skimming cases are investigated by the U.S. Secret Service. But through FBI investigative experience, we have learned that ATM skimming is a favorite activity of Eurasian crime groups, so we sometimes investigate skimming—often partnering with the Secret Service—as part of larger organized crime cases.

One last note: ATMs aren’t the only target of skimmers—we’ve also seen it at gas pumps and other point-of-sale locations where customers swipe their cards and enter their PIN. (See sidebar for tips on how to avoid being victimized by skimming.)