Pair Took Law into Their Own Hands 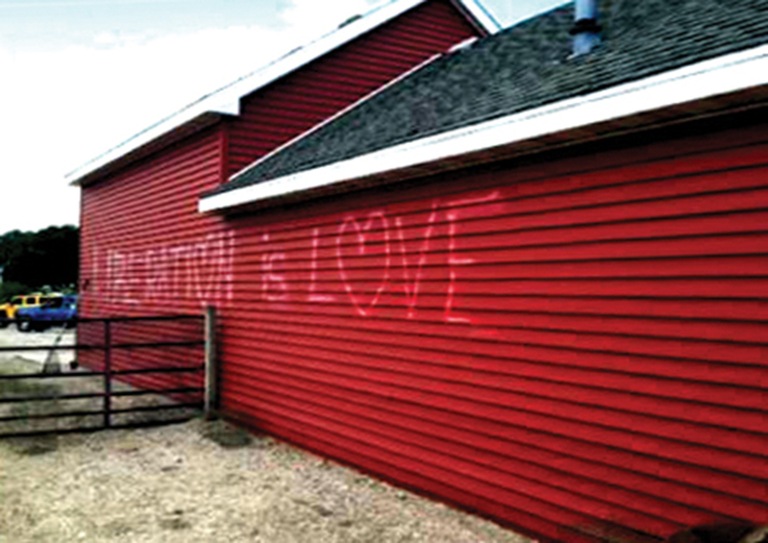 When a family-owned mink farm in Illinois was attacked by animal rights extremists in 2013, 2,000 minks were released from their cages and a barn was spray-painted with the words “Liberation is Love.”

On an August night in 2013, a family-owned mink farm in Morris, Illinois came under attack. Approximately 2,000 minks were released from their cages, an acidic substance was poured over two trucks parked on the property, and a sign spray-painted on the barn declared, “Liberation is Love.”

Some 24 hours later, when a police officer from nearby Roanoke, Illinois pulled over a car without license plates, he had no idea that the two young men inside were responsible for the earlier crime.

When the men’s stories didn’t add up about why they were driving a vehicle with no license plates or temporary tags, or what they were doing late at night on that deserted, rural road, the officer became suspicious. A search of the trunk revealed some curious items: books about terrorism and surveillance techniques, ski masks, and bolt cutters. The pair also had police scanners in the car, manually programmed to receive the frequencies of local police departments.

Kevin Johnson and Tyler Lang, both from California, were taken into custody for possessing burglary tools, and when it was later learned that the men were animal rights activists, the local authorities alerted the FBI.

“These two individuals were known animal rights extremists,” said Special Agent Maureen Mazzola, who specializes in domestic terrorism matters and investigated the case from the FBI’s Chicago Division. “We also knew they were based in California. The fact that they were pulled over in Illinois, 90 miles from the mink release that occurred the previous night, and that they were only a few miles away from a fox farm,” she added, “was too much of a coincidence.”

The subsequent investigation resulted in the pair being federally indicted in 2014 for damaging and interfering with the mink farm operations and conspiring to do the same thing to the Roanoke fox farm. Two other individuals—friends of Johnson and Lang—have been charged in connection with a spree of similar incidents in the summer of 2013. Joseph Buddenberg and Nicole Kissane are accused of terrorizing the fur industry, causing hundreds of thousands of dollars in damages by freeing minks and destroying breeding records in Idaho, Iowa, Minnesota, Wisconsin, and Pennsylvania.

Mazzola noted that most animal rights advocates don’t believe criminal activity is the way to obtain their goals. But for those few in the movement who support extremist ideology, “they feel that the only way to deal with companies and people involved in what they perceive as animal cruelty is to hit them with some type of criminal act,” she said. “They believe that legal protests are not enough and will never be enough.”

As a result of such crimes, in 2006 Congress passed the Animal Enterprise Terrorism Act, strengthening an existing statute and allowing the Department of Justice greater authority to target animal rights extremists. The law also offers more protections to those involved in animal research or who work in the animal industry—the usual victims of animal rights extremists.

The owners of the Illinois mink farm, meanwhile, lost everything when their farm was vandalized, and many of the minks died. “The farm was the primary source of the owner’s retirement and was how he supported his family,” Mazzola said. “Everything they had was tied up in the business.”