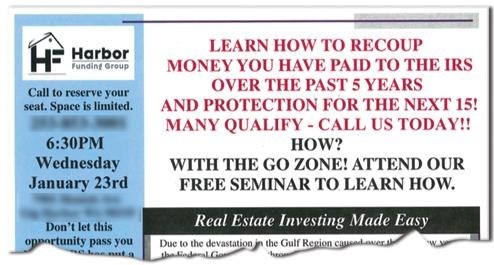 William Lange’s Harbor Funding Group, Inc. placed ads such as this to target real estate developers and their clients seeking to rebuild after Hurricane Katrina. Instead of financing their projects, however, Lange swindled hundreds of people out of millions of dollars.

Like many successful con men, William C. Lange made people believe that he really cared about them—even as he looked them in the eye and took their money.

The 67-year-old Washington state businessman was sentenced in March to 22 years in federal prison for swindling more than 300 investors in the U.S. and overseas out of $10 million. He had befriended some of his victims at Rotary Club functions. Many thought they would be getting loans to rebuild after the devastation of Hurricane Katrina in 2005.

“Unfortunately, this type of white-collar crime is all too common,” said Special Agent Ben Williamson, who investigated the case with Special Agent Mike Brown from the FBI’s Seattle Field Office. “Some investors lost their life savings.”

Conversation Between William Lange and Victim

Listen to a clip of a conversation between William Lange and a frustrated victim of HFGI’s advance fee scam trying to recover his money.

Lange and his co-conspirators, including his son, operated two companies that were “based entirely on lies,” Brown said. Lange founded the Harbor Funding Group, Inc. (HFGI) in 2006, and not long after began to target real estate developers and their clients seeking to rebuild after Hurricane Katrina. The pitch was that HFGI had access to lenders and millions of dollars in funds to finance real estate projects. To get that money, however, HFGI required investors to place 10 percent of the loan amount in an escrow account.

In reality, HFGI had neither lenders nor funds. And as soon as the money was placed in escrow, Lange took it to finance his own lavish lifestyle.

That advance fee scheme netted more than $9 million, which Lange spent on salaries, fishing and hunting trips, landscaping for his new house, Harley-Davidson motorcycles, and other business ventures. After the money was gone, Lange set up another sham business—Black Sand Mine, Inc. (BSMI)—with the supposed intention of mining gold and other precious metals on an Alaskan island.

Beginning in 2009, Lange convinced investors—through lies and misrepresentations—to purchase BSMI stock. Almost $1 million was collected, but instead of using it to mine for gold, the money was spent on salaries and other personal expenses for Lange and his crew.

How to Avoid Becoming a Victim

FBI agents who specialize in financial fraud stress that investors need to exercise common sense before giving someone their money. “There are no quick ways to get rich,” said Special Agent Ben Williamson. “If an investment opportunity seems too good to be true, it probably is.”

Before investing your money, it’s always a good idea to:

- Do your research. Who are you dealing with? Check for complaints with the Better Business Bureau and elsewhere online.
- Talk to as many people as you can about the investment. Get second opinions.
- Don’t rush into any decisions.
- If you are engaging in risky investments, be willing to lose what you put in.

More information about the FBI’s white-collar crime program and how to avoid financial fraud.

The FBI began to receive complaints about Lange’s business dealings, and in 2009 partnered with the U.S. Postal Inspection Service, which had also begun looking into his activities. During the investigation, countless financial documents were reviewed, victims were interviewed, and cooperating witnesses were engaged to help unravel the frauds. Lange was arrested in 2011.

In September 2014, Lange pled guilty to conspiracy to commit wire and securities fraud and admitted his leadership role in both the advance fee fraud and the gold mine investment schemes. Other co-conspirators have already been convicted or pled guilty in related cases, Williamson said, “but clearly Lange was the mastermind behind these crimes.”

Both Williamson and Brown are pleased that Lange received a lengthy jail term, but they also remember the hundreds of victims in the case.

One individual who lost nearly $100,000 in the HFGI scheme wrote in a victim impact statement for the court, “Our life savings have gone—we have nothing. Life financially has been horrific for us.” Another HFGI victim wrote, “We live in England, and this property investment opportunity was widely publicized here as a way to make a positive contribution to rebuilding the Katrina affected area as well as making a financial return.”

“We are glad that Lange is off the streets,” Brown said, “and unable to victimize anyone else.”