The Lasting Legacy of Operation Illwind 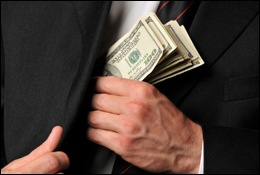 Twenty-five years ago today, a major multi-agency investigation into defense procurement fraud—later codenamed Operation Illwind, a likely reference to an old English proverb—was announced to the world via a one-page press statement.

By the time the dust had settled several years later, the case revealed that some Defense Department employees had taken bribes from businesses in exchange for inside information on procurement bids that helped some of the nation’s largest military contractors win lucrative weapons systems deals.

More than 60 contractors, consultants, and government officials were ultimately prosecuted—including a high-ranking Pentagon assistant secretary and a deputy assistant secretary of the Navy. As a monetary measure of the significance of the crimes, the case resulted in a total of $622 million worth of fines, recoveries, restitutions, and forfeitures.

The investigation began, as many cases of fraud and abuse do, when an honest individual refused to take part in criminal activity and instead contacted authorities. In 1986, a Virginia defense contractor was approached by a military consultant who said he could obtain proprietary bid information from a competitor in exchange for cash. The contractor did the right thing and reported the conversation to the FBI and the Naval Investigative Service (NIS)—now called the Naval Criminal Investigative Service, or NCIS.

The contractor agreed to cooperate and to let us monitor phone conversions he had with the consultant. After collecting enough information to determine what the consultant was up to, we confronted the man—and he agreed to cooperate as well. We soon had enough probable cause for the case’s first court-authorized electronic surveillance, or wiretap, and over time developed probable cause for others.

That enabled the FBI and its partners in the case—including NIS, the Defense Criminal Intelligence Service, the Air Force Office of Special Investigations, and the Internal Revenue Service’s Criminal Division—to execute more than three dozen search warrants in D.C. and 12 states on June 14, 1988. These searches of the offices of defense contractors, consultants, and government officials yielded a mountain of evidence, including financial documents.

A slew of indictments followed, and many of the defendants—faced with overwhelming evidence, including recorded telephone conversations where they had discussed their crimes—simply pled guilty.

The legacy of Operation Illwind is significant. The scandal so shocked the nation that just five months after the case became public, new rules governing federal procurement were put into place. The Procurement Integrity Act, amended in 1996, remains the law of the land.

The multi-agency investigation was also groundbreaking for the Bureau, especially in its use of court-authorized electronic surveillance—one of the first times we had used this tool so extensively in a white-collar crime investigation. A quarter century later, the case remains the largest and most successful investigation of defense procurement fraud in U.S. history.

Building on lessons learned from the case, the FBI continues to work with its partners to investigate defense procurement fraud and other government scams through our public corruption program, which addresses the FBI’s number one criminal priority. Using sophisticated and traditional investigative techniques, we remain committed to exposing procurement fraud not only in the Washington, D.C. area, but also around the nation—including, more recently, in places like California, Florida, and Utah.

Illwind Investigators: In their Own Words

At the height of the Illwind investigation, hundreds of Bureau agents were assigned to the case, working alongside their federal partners. Many of these agents have since retired, but there are still a fair number around in various FBI offices. Here are recollections from a few of those agents about the case:

“I was a new agent assigned to the Washington Field Office and worked on the Illwind task force for about two years. This task force was comprised of FBI, DCIS, and NIS agents, along with several federal prosecutors. This team of young agents and seasoned investigators and prosecutors was able to hold responsible those who tried to influence the defense procurement process by through monetary bribes and gifts.”

“I was a new agent temporarily assigned to the case. As a former Department of Defense auditor, the case truly interested me. I would like to think that my expertise helped some on the case, but as there where so many agents working on it, I learned early on how to be a team player. I knew that by charging so many government contractors and government employees, the FBI was sending a message loud and clear that in the U.S., we don’t buy off government officials in order to get contracts.”

“I volunteered to work Illwind and stayed for three years. The case was innovative from the Bureau’s perspective because we used an investigative team approach and multiple wiretaps in various cities during a complex white-collar crime investigation. Each team used the skills of both new and experienced agents to produce a domino effect of guilty pleas—early guilty pleas and cooperation made a significant difference to the speed of working our way to high-level corporate executives and government officials.”

“Illwind was just spinning up when I graduated from new agents training, so I began working on it immediately. I listened to court-authorized surveillances, wrote search warrants, carried out searches on the takedown day, and conducted interviews. I think Illwind was a monumental case because it was the first of its kind. Plus, it was such a widespread investigation that even the public took notice, and the outcry from the public over government waste and fraud was something we had not experienced before.”

“We were able to bring together so many different people from different agencies to work as a team during the investigation. And I think it was one of the first times that the Bureau used computer technology to support a major case—we started with one computer and pretty soon had a roomful, thanks to one of our IT guys. We were able to load information we had uncovered into the computers and then run automated searches to help find links between subjects.”

Investigation into the June 12, 1963 murder of Medgar Evers.