Civil Rights Case One of Our First 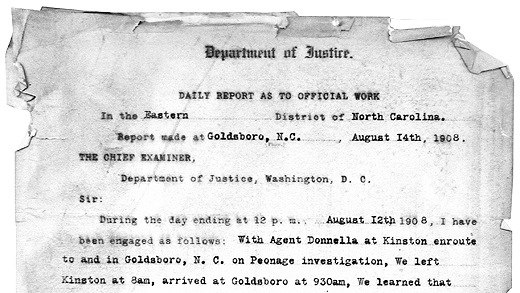 A copy of a 1908 report prepared by Samuel Allred, one of our first agents.

The new special agent force announced by Attorney General Charles Bonaparte on July 26, 1908—the forerunner of today’s FBI—was just days old when a civil rights crime in North Carolina led to one of its first investigations.

In the early morning hours of August 3, an African-American laborer named Arthur Dixon was arrested in Goldsboro for owing a debt of $4.20. Later that morning, he was tied with a rope and carried off to a nearby town to begin paying off his debt through forced labor.

It was a case of peonage—compelling a person to work to repay money owed. A fundamental denial of freedom without due process—and a practice that sometimes trapped people in a form of slavery when debts were never allowed to be fully repaid—peonage became a federal crime in 1867. Although rare in the late 1800s, peonage had become a regular practice in certain industries and parts of America by the early 20th century, and the Department of Justice was routinely investigating such cases.

Upon learning of the crime, two of our first agents—Samuel Nelson Allred and Schuyler A. Donnella (see sidebar)—began investigating. They spoke first to Dixon’s brother-in-law, a man named A. Wills, who was renting Dixon a room in his house. He said the pair was awakened at 3 a.m. by a police officer named High Ward, a constable of Rose Hill named Asa Fussell, and another man. Dixon was told he was under arrest for a debt owed to J.H. Fussell, whose family was prominent in local business and politics in Rose Hill. Wills told the agents that Constable Fussell was a son of the man that had Dixon arrested.

For the next week, Allred and Donnella traveled to Rose Hill and surrounding areas (see map) by train, horse, buggy, and even on foot, interviewing potential witnesses. With enough evidence gathered, they met with the U.S. district attorney in Greenville, who issued warrants for the arrest of the Fussells on a charge of peonage. The father and son were apprehended by a deputy U.S. marshal (Bureau agents were not authorized to make arrests at that time) and later released on $1,000 bond. Prior to the grand jury hearing in November, Allred and Donnella canvassed potential witnesses, especially Wills and Dixon, to make sure they were available for the hearing in Raleigh. The agents’ work was successful—on November 27, the jury indicted the two Fussells and a third man.

The matter was placed on the court’s docket for May of the following year. What happened after that is unknown. If it was like many cases of that time, the Fussells probably pled guilty, paid a fine, and were given a short sentence that was then suspended. It’s also possible the two were acquitted; peonage was so accepted in the day that juries in many areas would not convict even in the most horrendous cases.

The young Bureau’s focus on peonage was short lived. Although it didn’t disappear as a criminal violation, subsequent court rulings made certain types of peonage hard to prove. Other legal, social, and economic measures sapped the strength of civil rights protections for black Americans. Bureau agents experienced such investigative frustrations for many years, but five decades ago in the 1960s, the tide began to turn. Stay tuned for more stories on that subject in the months to come. 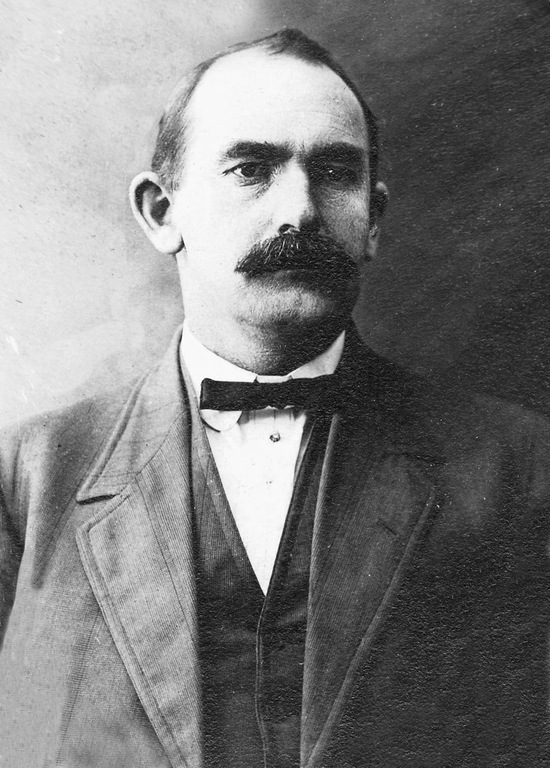 Who Were These First Agents?

In July 1908, the Bureau consisted of just 34 special agents. About a dozen of these agents were examiners who had accounting backgrounds. Another eight or nine were former Secret Service agents hired by the Department of Justice. The rest were tasked with various kinds of investigative work, including Special Agents Allred and Donnella, who were two of six peonage investigators.

Samuel N. Allred took the federal oath of office in October 1907 as a special agent in the Department of Justice and was assigned to investigate peonage matters in North Carolina, where he lived. He was 42 at the time. Allred would remain in the Bureau until 1921, when he was dismissed during a reduction in force. Allred offered his services again as America approached world war in 1940, but due his advanced age, the Bureau declined his offer.

Schuyler A. Donnella had been an agent of the Secret Service from at least 1890 and well into the 20th century. By fiscal year 1907, though, he had been transferred to the Department of Justice as a peonage investigator and continued on with the new special agent force when it was created. By 1911, Donnella had returned to the Secret Service, running its office in Louisville, Kentucky. That year, William Burns, future head of the Bureau of Investigation, described him as “an old seasoned Secret Service operative and one of the best that ever lived.”

New details about the case of serial killer Israel Keyes.