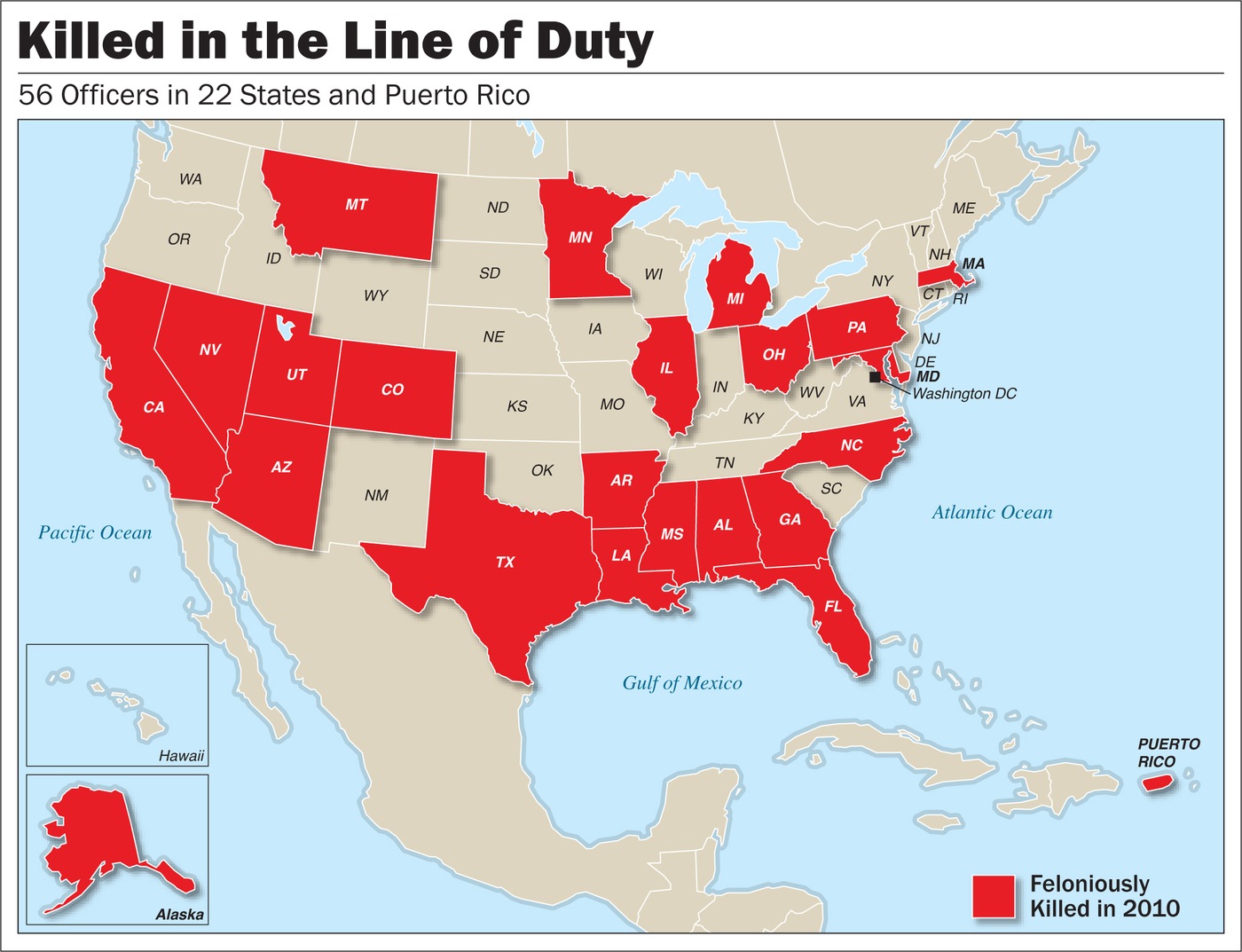 Law enforcement officers in 22 states and Puerto Rico were feloniously killed in 2010.

Fifty-six law enforcement officers in 22 states and Puerto Rico were feloniously killed in 2010, and more than 53,000 officers were assaulted during the same period, according to statistics released by the FBI.

The annual Law Enforcement Officers Killed and Assaulted report released today offers the most complete public picture of the fatal circumstances that officers faced in 2010. In chilling detail, the report summarizes most of last year’s fatal confrontations and illustrates a reality that every officer continually trains to recognize: that there are no routine engagements. Among the scenarios:

Information in the report, which is collected each year through the FBI’s Uniform Crime Reporting (UCR) Program, is intended to provide law enforcement agencies with detailed descriptions of the circumstances leading up to officer fatalities. The data can then be incorporated into tactical training.

“Only when detectives, use-of-force investigators, supervisors, and administrators examine the various components of the deadly mix will a greater understanding of these encounters emerge,” FBI researchers wrote in a study called Violent Encounters, an in-depth look at years of fatal altercations like those in today’s report. “To make an objective assessment of each case, it is necessary to carefully and completely examine all aspects of the incident thus allowing the facts to surface.”

The 2010 report also shows 72 officers were accidently killed in the line of duty, almost all of them involving vehicles. Meanwhile, 53,469 officers were assaulted while on duty—a figure that amounts to one in 10 of the sworn officers in more than 11,000 agencies that reported data.

All told, the figures illustrate the inherent dangers of law enforcement. Here’s a look at some of the data contained in the report:

The UCR Program, part of the FBI’s Criminal Justice Information Services Division, has been collecting and publishing law enforcement statistics since 1937, most notably the annual Crime in the United States reports. In 1972, the FBI began producing detailed reports on officer fatalities after the larger law enforcement community sought the Bureau’s involvement in preventing and investigating officer deaths.

Photos, videos, and documents released in the case of 10 Russian spies arrested in 2010.

The latest national assessment shows gangs are expanding, evolving, and a growing threat.