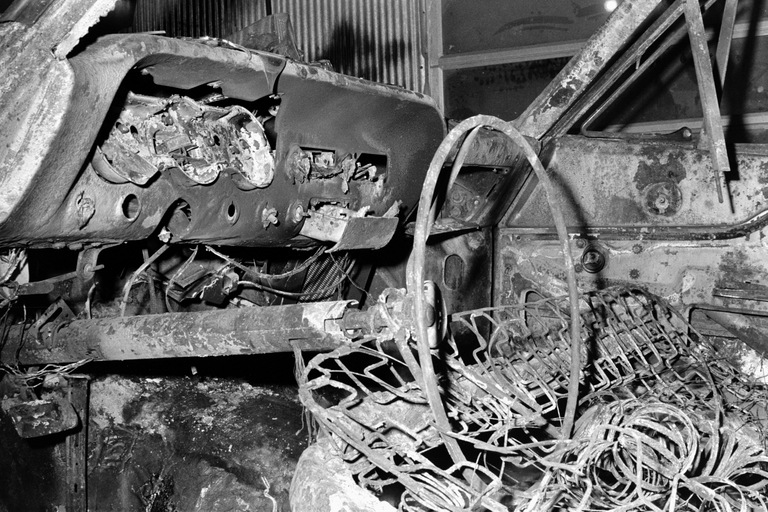 The burned interior of the station wagon that was discovered following the disappearance of activists Michael Schwerner, James Chaney, and Andrew Goodman.

Fifty years ago, our country was in the midst of a struggle to extend full rights and liberties to all of its citizens. On the national stage, the long legislative fight on the landmark Civil Rights Act was nearing a conclusion. Regionally, the push to roll back odious Jim Crow laws led to demonstrations between opponents of the legal discrimination and supporters of the status quo.

In Mississippi, the center of the civil rights effort in 1964 was the Freedom Summer, in which committed activists and local residents encouraged African-Americans to register to vote—fewer than seven percent of those eligible were registered at the time. The Council of Federated Organizations (COFO), a coalition of civil rights groups, arranged the drive, and orientation for its registrars had begun in mid-June. Michael Schwerner, a 24-year-old social worker, had just started a job with with the Congress on Racial Equality in Mississippi and quickly came to the attention of local Klan members. He had been at the Freedom Summer training in Ohio and was returning to Mississippi with fellow activists Andrew Goodman and James Chaney. Their plan was to visit Mount Zion Church in Neshoba County, which had been burned by the Klan.

Arriving in Philadelphia, Mississippi on June 21, the three were arrested by Deputy Sheriff Cecil Price, who charged Chaney with speeding and held the other two “for investigation.” Though the men were released from custody later that night and set off for their lodgings, they were followed out of town. They never made it to their destination.

Even before that, their friends at COFO had become concerned. Schwerner’s travel plans indicated the three would arrive at their hotel that afternoon. When they missed 4 p.m. check-in, COFO began to try and track their whereabouts, calling around the county throughout the evening. By 10 p.m., around the time they were released, COFO still hadn’t heard from them and relayed their concerns to the local FBI and a Department of Justice representative who was in the area. At that point, though, nothing was known of the three or about what had happened. Without evidence to suspect foul play, there were no grounds yet for FBI involvement.

But in this case, the ramifications were not just a local matter. The voting rights drive in Mississippi and its national implications were clearly on the radars of President Johnson and Attorney General Robert Kennedy, who took great interest in civil rights matters. Although the FBI’s local agent had begun asking about the missing workers on June 22, the Justice Department wanted even more involvement and told the FBI to place additional agents on the case.

By the next day, another 10 agents had been assigned to the case. The FBI received a tip about a burning station wagon seen in the woods off of Highway 21, about 13 miles northeast of Philadelphia—it was the men’s vehicle. Soon after the find, FBI Director J. Edgar Hoover was advising President Johnson on the case. With no remains found in the car, there was a slim hope that the three might still be found alive. President Johnson informed the Schwerner family and closely followed the FBI’s progress.

The Mississippi Burning, or MIBURN, case quickly became one of the Bureau’s biggest investigations; FBI resources and personnel that moved into Mississippi that summer—including the opening of the new FBI field office in the state capitol—reflected the massive effort.

Sweep in 106 cities recovers 168 victims of trafficking and arrests 281 pimps.

A look at our continued efforts to root out crooked officials—our top criminal priority.