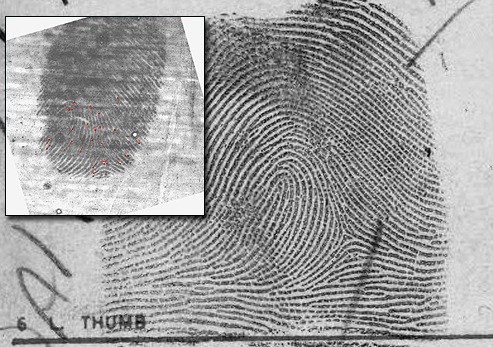 A latent thumbprint from the crime scene (inset) was matched to this IAFIS record.

The Latest on Latents

Latent prints are impressions—usually invisible to the naked eye—often left at crime scenes that are produced by the ridged skin on human fingers, palms, or soles of the feet. The FBI’s IAFIS receives an average of 700 latent search requests per day from authorized law enforcement agencies…with an average response time of one hour.

Our Next Generation Identification system, an incremental replacement of today’s IAFIS, will specifically focus on the latent user community next March when a National Palmprint System (NPPS) is scheduled to be established. The NPPS will create a centralized repository of known palmprints within the FBI’s database, allowing searches of unknown palmprints against the repository…as well as searches of known palmprints against the Unsolved Latent File. Both types of searches will enhance law enforcement’s ability to identify criminal and terrorist suspects.

The 2012 Latent Hit of the Year Award was presented last month to two employees of the Omaha Police Department—Detective Douglas Herout and Senior Crime Laboratory Technician Laura Casey—for their efforts to identify the man responsible for a brutal murder more than 30 years ago.

The crime: In 1978, 61-year-old Carroll Bonnet was stabbed to death in his apartment. Police collected evidence, including latent fingerprints and palmprints from the victim’s bathroom (officers believed the killer was trying to wash off blood and other evidence before leaving the apartment). The victim’s car was then stolen.

The investigation: The car was found in Illinois, but after collecting additional latent prints, investigators couldn’t develop any new leads. The crime scene evidence was processed, and latent prints recovered from the scene and the car were searched against local and state fingerprint files. Investigators also sent fingerprint requests to agencies outside Nebraska, but no matches were returned and the case soon went cold.

The re-investigation: In late 2008, the Omaha Police Department received an inquiry on the case, prompting technician Laura Casey to search the prints against IAFIS (which didn’t exist in 1978). In less than five hours, IAFIS returned possible candidates for comparison purposes. Casey spent days carefully examining the prints and came up with a positive identification—Jerry Watson, who was serving time in an Illinois prison on burglary charges.

The case was officially re-opened and assigned to the cold case squad’s Doug Herout. Working with laboratory technicians and analysts, Herout reviewed the original evidence from the case, including a classified advertisement flyer with “Jerry W.” scribbled on one of the pages. Herout also discovered that Jerry Watson had lived only a few blocks from where the victim’s car was recovered.

And the discovery was made just in time—Watson was just days away from being released from prison.

Herout traveled to Illinois to question Watson and presented him with an order to obtain a DNA sample. Subsequent testing determined that Watson’s DNA matched DNA recovered at the crime scene, a finding that—combined with Watson’s identified prints—resulted in murder charges and a conviction. On October 17, 2011—33 years to the day that Bonnet’s body was discovered—his killer was sentenced to life in prison.

It’s yet another example of the vital role that technology plays in getting dangerous criminals off our streets.