Sentence in 2010 Murder of Oklahoma Couple

Charged in 2010 Murder of Oklahoma Couple 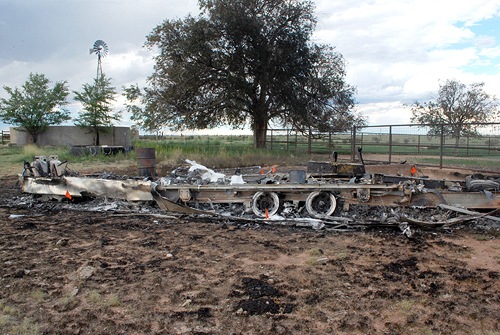 This is all that was left of the travel trailer belonging to Oklahoma retirees Gary and Linda Haas when it was discovered in New Mexico in 2010. The couple was murdered inside the trailer by a escaped prison inmate and his accomplices.

In August 2010, Oklahoma retirees and high school sweethearts Gary and Linda Haas took off in their truck and travel trailer for their annual camping trip to Colorado. But tragically, they soon crossed paths with violent prison escapees and were murdered inside that trailer.

It began on July 30, 2010, when McCluskey, fellow inmate Tracy Allen Province, and a third inmate—all violent offenders—escaped from an Arizona state prison with the assistance of Welch. (The third inmate was separated from the others during the escape but was apprehended two days later.)

McCluskey, Province, and Welch—using handguns provided by Welch—kidnapped two truck drivers who had stopped along a nearby interstate and took their truck to Flagstaff. Leaving the truck drivers at a rest stop, the group then stole a small sedan to continue their getaway. But after driving in the small car with little or no sleep, the three thought it would be a good idea to target a camper or trailer owner, so on August 2, 2010, they pulled off at a New Mexico rest stop to find one.

Unfortunately, Gary and Linda Haas also chose the same rest stop. And it wasn’t long before they were spotted by McCluskey and his accomplices, who carjacked the couple at gunpoint and forced them back onto the interstate.

A short distance later, McCluskey ordered the couple to exit the interstate and stop at a secluded location, where he shot and killed Gary and Linda Haas at point-blank range inside their trailer. The trio towed the trailer to another secluded location and set it on fire, with the Haases’ bodies inside. They then took off in the couple’s truck and drove to Albuquerque, where they abandoned it in a shopping center—but not before trying to wipe it down inside and outside to remove fingerprints.

On August 4, 2010, the New Mexico State Police discovered the remains of Gary and Linda Haas in their burned trailer. Later that day, they also located the couple’s pick-up truck in Albuquerque. After a multi-state, multi-agency manhunt, Tracy Allen Province was apprehended in Wyoming on August 9, 2010, and McCluskey and Welch—thanks to an alert U.S. Forest Service employee—were apprehended at a camp ground in Arizona on August 19, 2010.

Collaborative evidence collection played a key role in this case. Personnel from the New Mexico State Police and the New Mexico Department of Public Safety Forensic Laboratory performed the initial crime scene work at the burned-out trailer and the victims’ truck. Despite the criminals’ attempts to wipe the truck clean, the three subjects were able to be identified through fingerprint and DNA evidence they left behind.

Then the FBI’s Evidence Response Teams from our Phoenix and Albuquerque offices processed the location where McCluskey and Welch were apprehended as well as the stolen sedan they were driving. ERT personnel recovered several telling items owned by the victims, including the very handgun used to kill the couple and a cap belonging to Gary Haas that McCluskey was wearing at the time of his arrest.