Archaga Carias is charged federally in the Southern District of New York with racketeering conspiracy, cocaine importation conspiracy, and possession and conspiracy to possess machine guns. Archaga Carias allegedly controlled MS-13 criminal activity in Honduras and provided support and resources to the MS-13 enterprise in Central America and the United States with firearms, narcotics, and cash. Archaga Carias is also allegedly responsible for supporting multi-ton loads of cocaine through Honduras to the United States and for ordering and participating in murders of rival gang members and others associated with MS-13. This case is being investigated as part of Joint Task Force Vulcan. 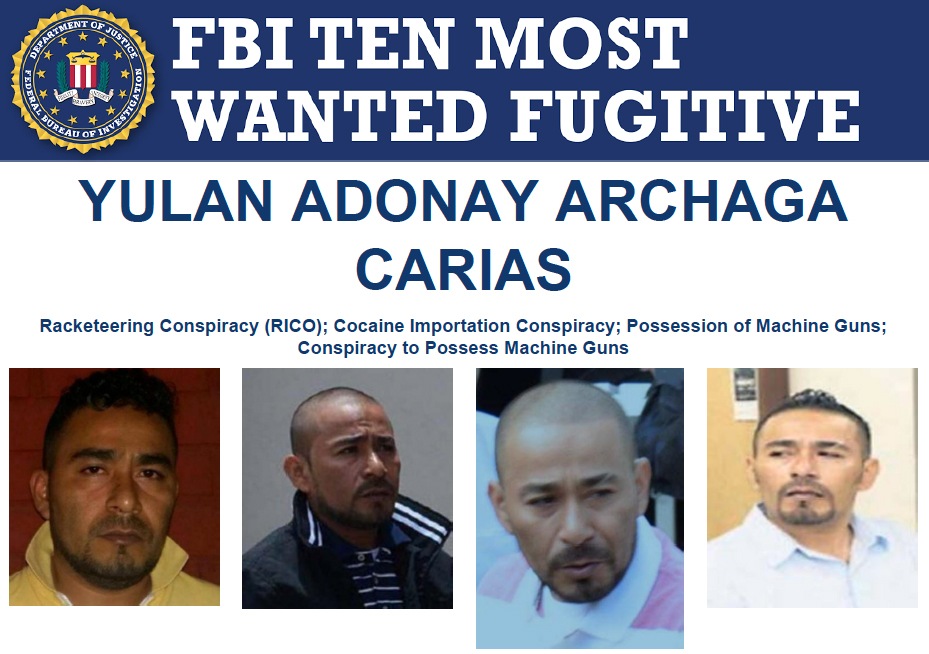 “Today’s announcement demonstrates the resolve of the FBI to aggressively pursue transnational criminal gangs like MS-13,” said Acting Assistant Director Jay Greenberg of the Criminal Investigative Division. “We will work with our law enforcement partners to find wanted fugitives like Archaga Carias wherever they seek refuge and hold them accountable for their crimes.”

Yulan Adonay Archaga Carias is described as a Hispanic male born in Honduras on February 13, 1982. He is 5’5” tall, weighs 160 pounds, and has black hair and brown eyes. He uses the alias of “Porky.”

Yulan Adonay Archaga Carias replaces Robert William Fisher on the FBI’s Ten Most Wanted Fugitives list, which was established in March of 1950. Since then, 526 fugitives have appears on the list; 490 have been apprehended or located, with 162 of those as a result of citizen cooperation.

The FBI is offering a reward of up to $100,000 for information leading to the arrest of Yulan Adonay Archaga Carias. Anyone with information concerning Archaga Carias should take no action themselves, but should immediately contact the FBI’s toll-free number at 1-800-CALL-FBI (1-800-225-5324), the nearest FBI office, or the nearest American Embassy or Consulate. Tips can also be submitted online at tips.fbi.gov.

Additional information concerning Archaga Carias, including his wanted poster in English and Spanish and the FBI’s list of Ten Most Wanted Fugitives, can be found at fbi.gov/wanted/topten.