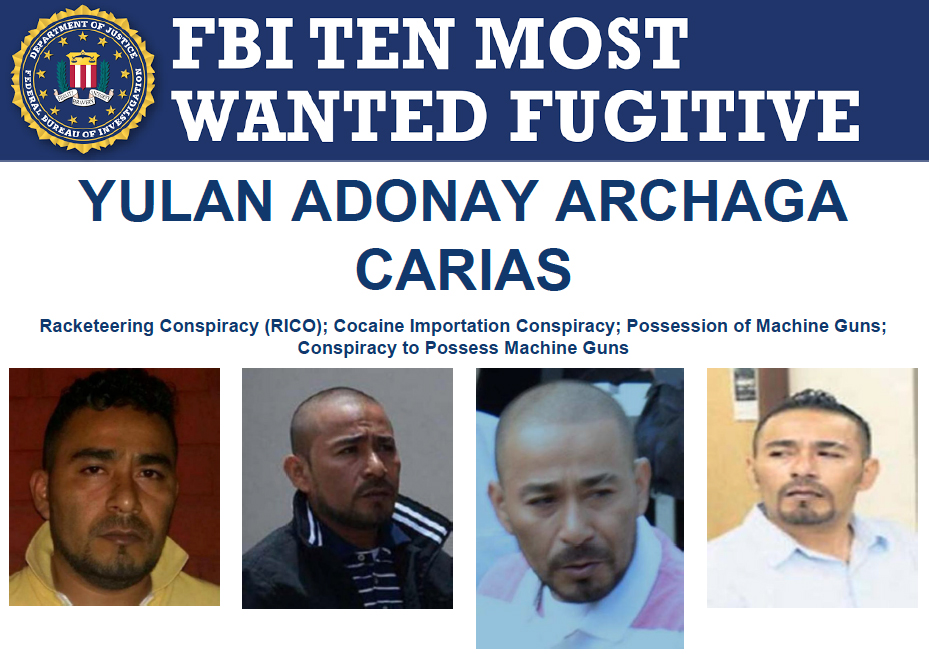 Narrator: When the FBI sets its sights on a Most Wanted fugitive, we pull out all the stops.

We leverage our full scope of investigative and intelligence resources and capabilities and tap our domestic and international partnerships to hunt down these alleged bad actors—no matter where they might be hiding.

But tips from the public are often the breakthroughs that let us get fugitives off the street and into federal custody.

On this episode of Inside the FBI, we’ll introduce you to Yulan Adonay Archaga Carias, the alleged leader of MS-13 for all of Honduras—and the newest member of the FBI’s Ten Most Wanted Fugitives List.

We’ll discuss the threat posed by MS-13, how the FBI and its partners are working to take down the transnational gang and explain how you can help us bring Archaga Carias to justice.

This is Inside the FBI.

Narrator: To fully grasp why capturing Yulan Adonay Archaga Carias is so important to the FBI, you first need to understand his alleged organization—the transnational gang MS-13—and how it threatens U.S. and international security.

Durgin: When MS-13 started in the 80s in Los Angeles, they actually started as the Maras Stoners. And they were made up kind of a group of El Salvadorians who were fleeing the violence and the civil wars that were taking place in El Salvador and Guatemala. They settled in Los Angeles, listening to rock music and just kinda hanging out and smoking marijuana and things like that.

Durgin: So, they started recruiting members that were more violent. They quickly found that one of the gangs that they had to deal with was the Mexican Mafia, or La eMe.

Narrator: Which is actually a Southern California prison gang and not based in Mexico.

The first word—“mara”— means “gang.” The “Salva” is short for Salvador—a nod to the founding members’ lineage. “Trucha” typically means “street-smart or intelligent,” he explained.

Finally, he noted, the “trece”—Spanish for “13”—is a nod to the Mexican Mafia and MS-13’s allegiance to it. This is because the number 13 is associated with the letter M, and the Mexican Mafia’s nickname of La eMe literally translates to “The M.”

Durgin: They evolved into MS-13 in order to pay homage to the Mexican Mafia so that they could continue to operate in California.

Narrator: The U.S. government responded to rising MS-13 violence in the late 1980s and early 1990s by deporting undocumented gang members back to their home countries, including El Salvador.

But once these criminals arrived back on Salvadorean soil, Durgin says...

Durgin: It was just a self-fulfilling prophecy.

Narrator: And the former California-based gang members began to dominate huge areas of the country. From there, Durgin explained, gang members figured out ways to return and spread violence to the U.S.

Narrator: According to Durgin, MS-13’s business model is violence.

Durgin: They commit, you know, violent acts worldwide to support their prestige, enhance their reputation, and to exert control on the territory and the populace with which they seek to influence.

It’s a very strange thing where, you know, we typically kinda can't understand on the whole, like, what their endgame is. In their view, by committing those violent atrocities, it makes people more fearful of them, allows them to conduct their operations, control territory, and exert kinda that control, and influence the populations with which they intend to control.

Narrator: This, in turn, allows MS-13 to sell drugs and extort individuals, since fear of retribution ensures they won’t alert the authorities. However, Durgin said, the gang’s penchant for brutality also helps it retain members.

Durgin: Because you know, kinda once you've committed some of these violent, atrocious acts, you've kind of bought into the methodology. And it’s really difficult to get out after you've done some of these things.

Narrator: MS-13 has an especially bad track record in El Salvador, where the national government has classified it as a terrorist organization.

But, he says, the organization has a global reach.

Durgin: They're also involved in a lot of illicit activities worldwide, to include extortion and narcotics trafficking. Which, you know, as we all know, affects a great number of people in the United States and elsewhere.

MS-13 has what we like to refer to it as a board of directors, and they have it on several levels. And that board of directors is mostly in El Salvador, but they also have country-specific leaders—several in the U.S., you know, in Honduras, Guatemala, in the areas where they have the most prevalent activity.

Narrator: This, he says, is where Archaga Carias allegedly comes in, as he’s believed to run the gang’s daily operations in Honduras.

Yulan Adonay Archaga Carias—also known as “Porky” and Alexander Mendoza—was born on February 13, 1982, in Honduras. He’s described as a Hispanic male with black hair and brown eyes who stands 5’5” tall and weighs 160 pounds. The FBI added him to its Ten Most Wanted Fugitives List in November 2021.

Durgin: Obviously the FBI Top Ten Most Wanted is a veritable “who’s who” of the worst type of offenders that the FBI goes after. What makes Porky different is that his sphere of influence not only affects crimes in the United States but a lot of North America, as well.

And then the importation of narcotics, which he is alleged to be a part of in a large scale, you know, really affects the United States as a whole, as well as the other places where MS-13 operates. And the violence employed by the narcotics trade and Porky in that area is obviously particularly gruesome and ruthless.

He allegedly managed MS-13’s illegal activities in his home country of Honduras. He’s also accused of providing the gang’s enterprise in Central America and the U.S. with backup, in the form of guns, drugs, and cash.

Additionally, he allegedly helped move multi-ton loads of cocaine through Honduras and onto American soil.

He’s also accused of ordering and taking part in the murders of rival gang members and other MS-13 associates.

Durgin: In February 2020, he was being brought before a Honduran court for his alleged role in the murder of two Honduran prosecutors who were looking into his and other MS-13 activities in Honduras.

And it was during that court appearance that approximately 20 individuals wearing military and police-like uniforms stormed the courthouse and facilitated his escape. And during that escape attempt, four Honduran law enforcement officers were unfortunately killed.

Narrator: Archaga Carias is believed to be hiding in Honduras with help from MS-13 entities, Durgin said, and the FBI is offering a reward of up to $100,000 for tips that lead to his arrest.

But since he should be considered armed and dangerous, the FBI cautions anyone with information about him from taking action on their own.

Durgin: And I would at no time make any type of contact or let him know that you recognized him in any way.

Narrator: Instead, if you have information about Archaga Carias, you should immediately call us at 1-800-CALL-FBI or submit a tip online at tips.fbi.gov. If you’re outside of the U.S., you can also contact your nearest U.S. Embassy or Consulate.

Durgin: The FBI prides itself on protecting identities of anyone who is willing to provide us with the necessary information we need to do our jobs.

Myself and my team take it very seriously because we would never wanna see someone hurt for doing what is right. And selfishly, no one would want to help us if they ever found out we endangered someone who helped us in the past.

We can and will use all available tools, including the assistance of our partners and the Transnational Anti-Gang group in El Salvador, Guatemala, and Honduras to protect your identity and help anyone who’s willing to help us.

Narrator: In response to the MS-13 threat, the U.S. Department of Justice in 2019 established Joint Task Force Vulcan, an interagency, whole-of-government organization aimed at using U.S. government and international partnership efforts to take down the gang.

Durgin: Working with our partners, we want to attack MS-13 from two fronts, right? Go after the leadership, and then, also, try to find some new ways to influence young people who are vulnerable to the allure of joining MS-13 and educating them on the pitfalls of making such a choice.

Myself and others in the FBI have dealt with young people who have made the mistake of joining the gang and found themselves in the three places where MS-13 prides itself on finding themselves at the end of the day, and that’s the hospital, the prison, or the morgue.

We believe that targeting MS-13 at the top and attacking their ability to replenish their ranks is a winning strategy for eliminating the threat of MS-13 and will make nationwide law enforcement efforts going after the criminal activity in the middle that much more effective.

Narrator: The task force also supports law-enforcement efforts that target what he calls “the middle of the gang,” he noted.

Durgin: In the two-and-a-half years since Joint Task Force Vulcan was created, we've had some great success against attacking MS-13.

Narrator: The task force’s operational victories have included the indictment of multiple El Salvador-based members of MS-13’s proverbial board of directors.

And strategic achievements have included the launch of a public service awareness campaign and the establishment of an MS-13-specific tip line that the public can reach at 1-866-STP-MS13.

The FBI also recently spearheaded a gang-prevention program that brings former gang members to schools to speak with students and help discourage them from repeating their mistakes.

This has been another episode of Inside the FBI.

You can follow us on your favorite podcast player, including Apple Podcasts, Google Podcasts, and Spotify. You can also subscribe to email updates about new episodes by visiting fbi.gov/podcasts.

On behalf of the FBI’s Office of Public Affairs, thanks for listening.

Yulan Adonay Archaga Carias, the alleged leader of MS-13 for all of Honduras, has been added to the Ten Most Wanted Fugitives list, and the FBI is offering a reward of up to $100,000 for information leading directly to his…

Some 33,000 violent street gangs, motorcycle gangs, and prison gangs with about 1.4 million members are criminally active in the U.S. and Puerto Rico today…