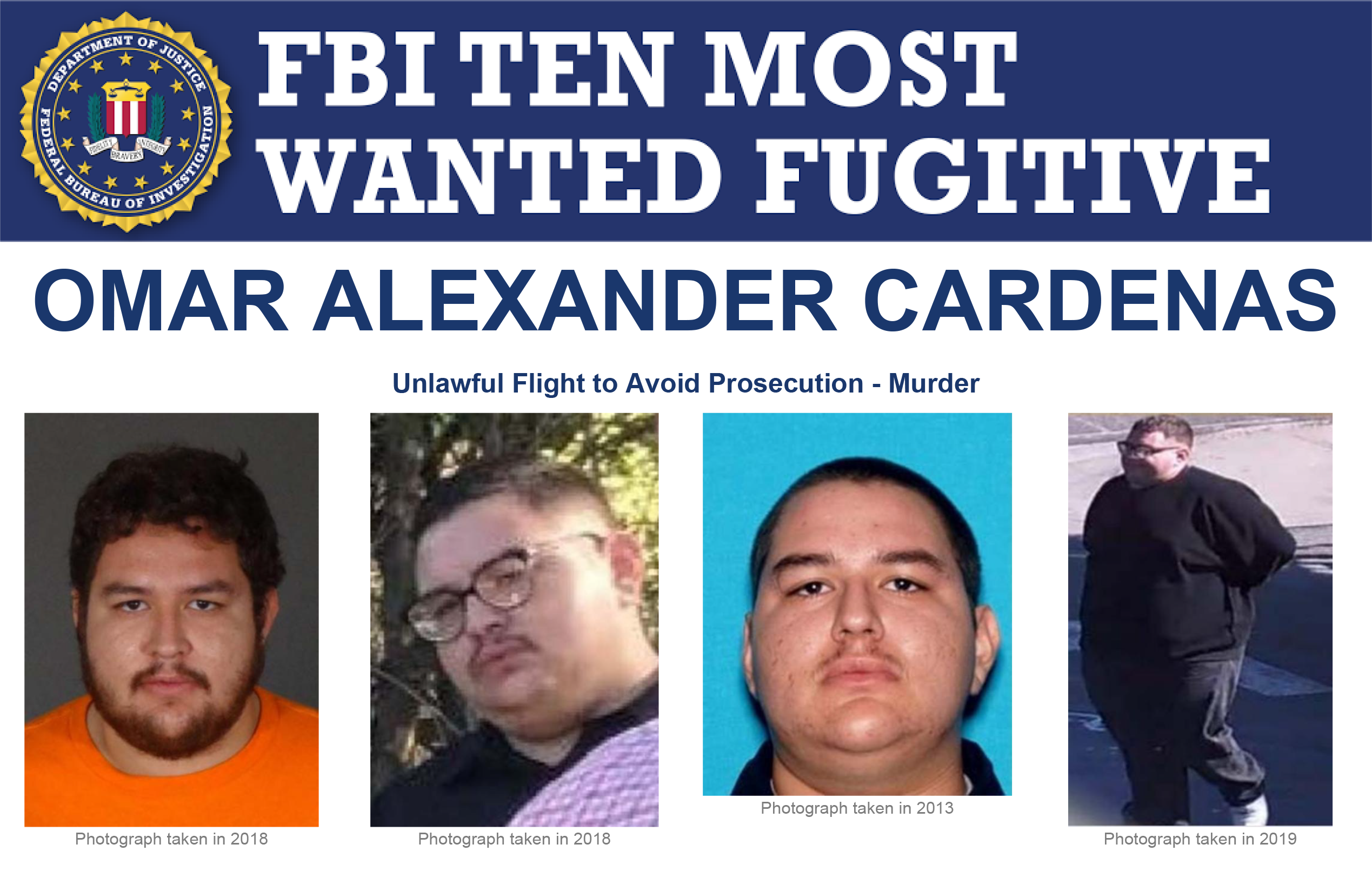 Alleged gang is a member recent addition to the FBI’s Ten Most Wanted Fugitives List.


Inside the FBI: Ten Most Wanted Fugitive Omar Alexander Cardenas

Monica Grover: An alleged gang member wanted in connection with a murder has been added to the FBI’s Ten Most Wanted Fugitives list.

Tune in to this episode of Inside the FBI for the information you need about Omar Alexander Cardenas and to learn what you can do to help us catch this fugitive.

I’m Monica Grover, and this is Inside the FBI.

On August 15, 2019, Omar Alexander Cardenas allegedly fired several rounds of a semi-automatic handgun toward the Hair Icon Barber Shop, located in a shopping center in the Sylmar neighborhood of Los Angeles.

The shooting that day also endangered all the people shopping there and engaging with their friends, family, and neighbors—and it has left a lasting impact on the community.

Cardenas often goes by the nickname “Dollar” and is allegedly a member of the Pierce Street Gang. He may associate with the Pacoima Van Nuys Boys/Anybody Killas.

Case agent Michael Alker from our Los Angeles Field Office cautions that Cardenas is considered a risk to the public.

Michael Alker: There's a distinct, strong possibility that Mr. Cardenas has been involved in several other violent crimes. And he is a continuing threat to society based upon just the nature of these crimes.

Cardenas is between 5’6’’ and 5’7’’ tall and weighs approximately 240 to 300 pounds. He has dark brown to black hair and a beard, but he’s known to vary his appearance.

Alker: He normally wears thick prescription lens glasses. I would ask the public to look for any tattoos.

Grover: Investigators believe that Cardenas may have fled to Mexico—but have not ruled out his possible presence in the United States. Cardenas has family members and/or associates in Los Angeles and the surrounding counties, as well as in Mexico. He may be employed as a construction worker, as he has worked in that field in the past.

The FBI is offering a reward of up to $100,000 for information leading to the arrest of Omar Alexander Cardenas.

If you have any information, you can contact the FBI at 1-800-CALL-FBI, or 1-800-225-5324, or online at tips.fbi.gov. You can also contact your local FBI field office or the nearest American Embassy or Consulate. No piece of information is too small, and matter how you contact us, you can remain anonymous.

This has been another production of Inside the FBI. You can follow us on your favorite podcast player, including Spotify, Apple Podcasts, or Google Podcasts. You can also subscribe to email alerts about new episodes at fbi.gov/podcasts.

I’m Monica Grover from the FBI’s Office of Public Affairs. Thanks for tuning in.

Omar Alexander Cardenas, wanted for his alleged involvement in the murder of a man and unlawful flight to avoid prosecution, has been added to the Ten Most Wanted Fugitives list.