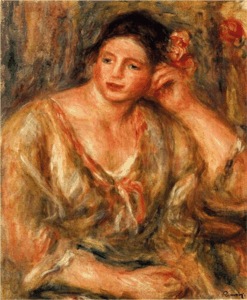 On September 8, 2011, Madeleine Leaning on Her Elbow with Flowers in Her Hair by Pierre Auguste Renoir was stolen during an armed robbery in a Houston home. The masked robber is described as a white male, 18 to 26 years old, who weighs about 160 pounds and is approximately 5’10” tall. He was armed with a large-caliber, semi-automatic handgun. A private insurer is offering up to $50,000 for information leading to the recovery of the painting. Details

IF YOU HAVE ANY INFORMATION CONCERNING THESE WORKS OF ART OR CIRCUMSTANCES OF THESE CRIMES, PLEASE CONTACT YOUR LOCAL FIELD OFFICE OR THE NEAREST U.S. EMBASSY OR CONSULATE OR SUBMIT A TIP ONLINE.